I am reviewing the Lenovo ThinkPad Tablet which is Lenovo’s effort in providing a tablet computer pitched at business users. Some of the design factors that Lenovo used for this unit include a durable housing, a stylus as an alternative to touch control and the supply of security and manageability software.

Lenovo have also taken advantage of Android’s competitive app-store ability to provide an app store of their own so businesses can purchase and control the apps that a tablet can be equipped with.

The Lenovo ThinkPad tablet feels heavier to use than most other tablets, more like the first-generation Apple iPad tablet and is similarly thick. But it has a rubberised back which really permits non-slip use, especially if you are likely to be cradling it around your business to show Websites, around home to watch videos personally or around the express train to read ebooks or play Angry Birds.

The touchscreen display is as expected for most of the 10” tablets including the Apple iPad 2, being easy to read in varying light and also very responsive. The only limitation that I would find with this is the glossy display which attracts the fingermarks too easily and is a common issue amongst products of this class. 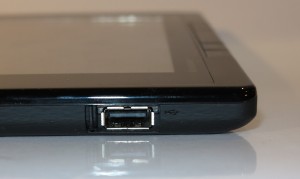 The Lenovo ThinkPad Tablet performed very well with the sound especially when you use it with headphones. The internal speakers don’t yield enough volume for any use except if you are close to the tablet.

Lenovo has made a desktop dock and a keyboard folio that connects to a special connection port as optional accessories. But this Android-powered ThinkPad Tablet does allow you to connect to a larger variety of devices using industry-standard connectors.

Here, you have a standard USB host port so you can plug in USB memory keys; as well as a standard SD card slot for those camera cards when you want to preview your pictures. External power from its supplied charger, a car charger or an external battery pack is supplied using a micro-USB connector that is commonly used for Android smartphones.

If you needed to use external audio-video equipment, you have a headphone socket and a mini-HDMI socket for this purpose.

The Lenovo ThinkPad Tablet was very responsive in many ways. For example the graphics performance lived up to the Tegra norm and it was able to run multiple tasks concurrently without slowing to a crawl.

The ThinkPad Tablet can be controlled with a supplied stylus

I even noticed how the battery performed after watching an episode of “Spiral” (“Engrenages” – a new French crime-drama series that I like watching) through SBS’s on-demand-video Website, then playing a few rounds of the supplied Solitaire game. Here, the battery was half-empty after this run of intense multimedia activity.

I would personally like to see Lenovo provide security, manageability and remote-computing software for the small business owner. This could be in the form of a remote-desktop client that works with the RDP (Windows) protocol as well as low cost remote-servicing tools for IT contractors and business-grade security that is positioned for this class of user.

As well, Lenovo could target the ThinkPad Tablet effectively at the small-business users through their marketing.

Technically, this tablet could be equipped with Bluetooth 4.0 technology so that it can work with sensor devices that use this low-power technology, which could appeal to medical professionals, technicians and similar user classes.

I would recommend the Lenovo ThinkPad Tablet as a durable “open-frame” tablet-based solution for small businesses, especially anyone who repairs or installs anything.  Here, they could keep PDFs of product / parts catalogues, service manuals, price lists and similar documentation “on hand” and ready to show to the customer; as well as an read-and-quick-reply terminal for email, a camera to take example photos to show the customer amongst other things/

Feature Article – Having the online life in that private space