How Microsoft Is Bringing Windows 10 Features, Including Cortana, To Android And iOS | Lifehacker 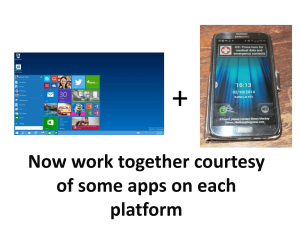 They now can work together

Manufacturers and platform vendors live in a dream world where customers will have their phone, computer and tablet all on the same or related platforms.

But the reality is that most people will have a personal computing environment based on two or three different operating systems. Typically this is an iPhone or Android smartphone working alongside a regular computer running Windows or MacOS X and, most likely, an iPad or an Android or Windows tablet.

It leads to problems associated with data interchange between the various devices and may require you to use cloud services or folders on a NAS, along with software import / export abilities to exchange the data. Even keeping your phone book or contact list in sync amongst devices of the various platforms can be very difficult.

But Microsoft has taken off from where they have built developer tools to allow you to quickly have apps ready-to-deploy for iOS, Android and Windows. They have taken this further by providing iOS, Android and Windows 10 apps that interlink and share data between your computer, tablet and smartphone. It may go against the dream held by Apple and their fanbois that once you have an iPhone, you progressively move towards an all-Apple computing environment with your regular computer being a Macintosh.

The first of these is the Phone Companion. This determines the corresponding apps you need to download from the iTunes App Store (iOS) or Google Play (Android) to interlink your phone with our Windows 10 computer on an application level.

These apps make use of Microsoft’s Windows OneDrive as a transfer point between your smartphone and your Windows 10 computer. For example, one of the apps provides a “hook” for your phone platform’s camera app to transfer photos to OneDrive so they show up on your computer.

There is also the XBox Music app which allows you to store your music on OneDrive and stream it to your iOS or Android smartphone while notes you create with OneNote on either your computer or smartphone show up on the other device. Microsoft is even making sure that if you modify a document on its Office mobile applications, the changes are reflected on your Office desktop applications.

Both the main smartphone platforms have their own integrated voice-driven personal assistant software in the form of Siri for iOS and Google Now for Android. But Microsoft has written a gateway app for each of these platforms so you can use Cortana as your voice-driven personal assistant. They are pushing the idea that, with Windows 10, Cortana will work across your smartphone and your regular computer in a platform-agnostic manner instead of just working with your smartphone or tablet..

A situation that can arise with any interoperability solution is that the solution can be engineered to be the hub of your computing life and not work tightly with the other platforms. For example, you may not be able to link your iOS or Android contacts function tightly with Windows nor would you be able to exchange photos between your device’s native photo storage and your computer’s photo collection smoothly. This can be of concern for, say, iOS users who make the Camera Roll serve as their handheld “brag-book” even though they have a PC or Mac having its own photo store or a cloud service like Dropbox being a photo exchange.

It is a step in the right direction to ensure data interoperability across the different mobile and desktop platforms when sharing data between devices along with satisfying the multiple-platform computing reality that affects most people.

What is the “new computing environment” and how to go about it?