You may have your music held on a smartphone or tablet but you want it coming through better and louder speakers. Similarly, you have packed out your laptop computer or an external hard disk which you connect to your laptop with music. But you still want the flexibility of moving around your space with your phone or positioning your laptop wherever you want it.

Devices you can use

A common method would be to use a Bluetooth link. This is supported by every smartphone and tablet but would only work with a Bluetooth audio adaptor or Bluetooth speaker system.

Here, the Bluetooth audio device must work to the Bluetooth A2DP audio profile for music playback and AVRCP audio control profile if you want to control the phone from the device’s controls.

To set up your wireless link, you would have to “pair” you mobile device with the Bluetooth audio device. Here, you place the device in “discoverable” mode and then use the mobile device’s “add Bluetooth device” function to discover the audio device. Most recent devices go in to “discoverable” mode when they are first plugged in but with a device that is already connected to power, you may have to hold down a “setup” or “Bluetooth” button. Here, an indicator light may flash in a certain manner to show that the device is in “pairing” or “discoverable” mode. 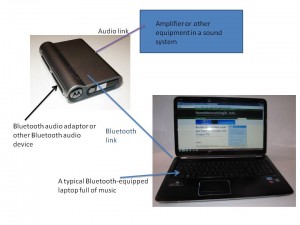 When you go to your mobile device and use the “add Bluetooth device” function, there will be a list of devices you had already “paired” with your phone as well as a new device name, typically representing the audio device’s brand or model name. Select this device and the pairing process will take place. If your mobile device shows a “password” or “PIN” request as part of this setup, enter 0000 in response to this request.

If you subsequently use the same Bluetooth audio device, you may have to “connect” to that device to have it play its music through the audio device. This may require you to enable Bluetooth and, in some cases, select the device’s name to connect it.

Laptop users would then find that the Bluetooth A2DP and Hands Free Profile will present themselves as “sound devices” through the use of class drivers implemented by Windows 7 and MacOS X. You may have to set the Bluetooth virtual sound cards as default sound devices if you are using applications that don’t allow you to determine the sound device for that application. I have covered this issue in further detail in an article about using laptops with Bluetooth devices.

Another wireless connection method is to use a Wi-Fi wireless network. This uses a choice of two protocols: Apple Airplay and the open-standard DLNA protocol.

These setups require that the mobile device and the wireless network media player are linked through a network that has a Wi-Fi segment and are seen as the same logical network.

In some cases, the network media player can be connected to an Ethernet or HomePlug segment as long as that segment is accessible to the Wi-Fi wireless segment. 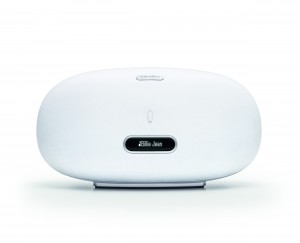 These setups can work with network media players and wireless speakers that implement Wi-Fi Direct thus avoiding the need to use a wireless router like a MiFi to create a wireless-network segment. Similarly, some Wi-Fi Direct “master-device” implementations like the Intel implementation used in Windows laptops can allow the device to be a host for a Wi-Fi Direct segment and a client to an existing Wi-Fi network, thus bridging the connections. This can come in handy with public wireless hotspots due to client isolation and, in most cases, Web-based login being established on them; features which could impede the establishment of a Wi-Fi wireless music network.

But you can gain better results with a dedicated WiFi router or access point like one of the portable “MiFi” routers.

Infact most of these setups implement WPS one-push setup for Android mobile devices, Windows 7 computers and most current-issue Internet audio equipment. On the other hand, they will have a pre-determined device-unique WPA-PSK device passphrase for use with Apple devices. 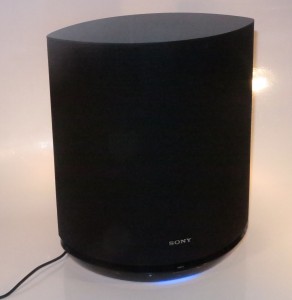 It is also worth knowing that some speakers like the Sony SA-NS310, SA-NS410 and SA-NS510 also have access to advanced functions through the use of a dedicated smartphone app. In the case of these speakers, they have direct access to online music services or Internet radio with this software but you may find that they would work better with a regular small-network setup with a router serving a dedicated Internet connection. Again a “MiFi” may come in handy here when you use them at a hotel or serviced apartment with the existing public-acces Wi-Fi network.

This method works best with iOS devices like the iPhone or with computers that are running iTunes. Here, you have to use the AirPlay functionality within iTunes or the music player in your iOS device to “push” your music to your AirPlay-capable device.

Rogue Amoeba have provided the AirFoil program for MacOS X and Windows platforms which turn your AirPlay-capable devices in to a virtual soundcard for your computer. I have helped a friend with purchasing and installing this program on their Windows 7 computer so they can pipe Spotify through an Apple AirPort Express device connected to their home stereo. This program sells for US$29 per computer.

The UPnP AV / DLNA-based media setup is a highly-flexible network media playback setup which is more open-frame in nature. I have covered this setup previously due to this ability and the ability for many hardware manufacturers and software developers to support it.

If the idea is to have your music device such as your laptop or smartphone control the music, you will need to make sure that the device can work as a “MediaRenderer”. Devices like the Sony CMT-MX750Ni music system, the WD TV Live network media adaptors or the Pioneer XW-SMA3 wireless speakers will work with this function out of the box but some devices that support this function may require you to visit their setup menu to enable “DLNA Remote Control” or similar functions.

A DLNA-based setup requires a media server to be installed on your computer or mobile device. Windows-based computers will perform this function using Windows Media Player but you can use other third-party players like TwonkyMedia. Here you would have to point these programs to your music library.

Android phones and tablets can work from one of many different DLNA media server-controller apps like TwonkyMedia or AllShare, which is set up to share the content on your device or the SD card.

Depending on the media-client device, a DLNA setup can be managed from the media client device’s control surface or from your computer or mobile device. For example, Windows Media Player that comes with Windows 7 or 8 offers a “Play To” function which allows you to have your content “pushed to” devices that support this kind of control.

DLNA can work as a virtual sound card for Windows computers if you use the Jamcast virtual-sound-card software on your computer, which costs US$29.99. This can be useful for setups like the streaming music services like MOG, Pandora or Spotify which rely on a Web page or client program for them to work.

On the other hand, you could use the DLNA setup to have a laptop play music from your smartphone or tablet. This can be achieved with TwonkyMedia Manager for all platforms or with Windows Media Player 12 (Windows 7 and 8). In the case of Windows Media Player 12, you would select “Stream” – “Allow remote control of my player” to have this option work.

Sometimes if one of the wireless speakers doesn’t work properly such as failing to reinstate with the device or network or a Wi-Fi speaker failing to connect to another wireless network segment, you may have to reset the speaker. This is a procedure that is dependent on the speaker but may involve you pressing a “RESET” button in a certain way  Then you may have to pair your audio device to the speaker again or configure it to the network you want it to join.

If the idea is to operate that Bluetooth or Wi-Fi speaker at a pool party, avoid the temptation to think that you can operate the iPhone that’s containing the music from the pool or spa. This is where a lot of portable devices become damaged due to the water. Here, it would be better to have the device containing the music, as well as the speaker located as far back from the water as you can, such as near a wall or safety fence.

Once you have your smartphone, tablet or laptop working with a wireless-audio link such as a Bluetooth link, you can be able to have a chance to hear better sound out of these devices while allowing yourself to move the smartphone or similar device around freely.

This article, originally published on October 2012, has been updated to make reference to Rogue Amoeba’s AirFoil virtual-sound-card software for Apple AirPlay and to update new pricing details for Jamcast. As well, I have provided direct links to the software developers’ Web pages. I have also created links to the product reviews for the Sony SA-NS410 and SA-NS510 speakers which I had reviewed since the article was first published.

Why do I represent the Naim NDX network media player as the poster child for top-notch home-network-based audio?

5G mobile broadband and Wi-Fi can complement each other