I am reviewing the HP Envy 4 Touchsmart Ultrabook which is a newer take on the previously-reviewed Envy 4 Sleekbook. But this unit also comes with a touchscreen that takes advantage of the touch-enabled interface that Windows 8 is all about. Of course you have the regular keyboard and touchpad for content creation, especially if you want to create content. 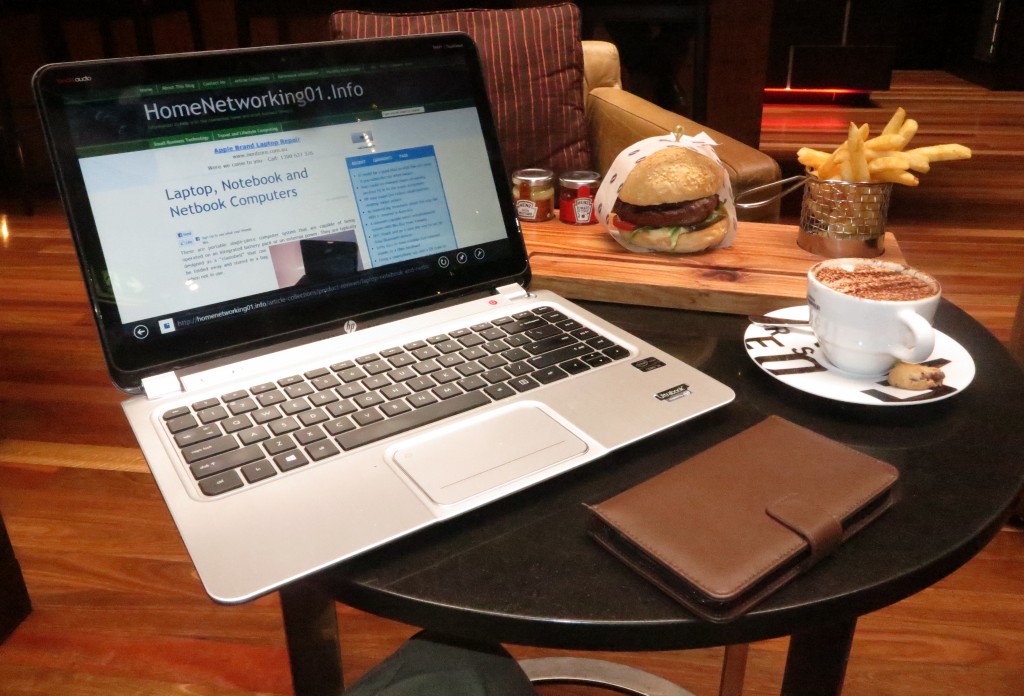 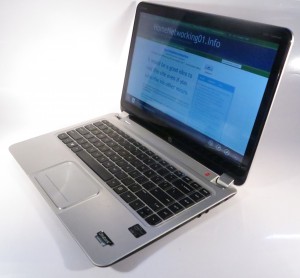 The HP Envy 4 Touchsmart Ultrabook is the regular slimline clamshell laptop that satisfys Intel’s “Ultrabook” specifications but uses an aluminium escutcheon around the keyboard and trackpad. This yields a luxurious and cool finish where there is nothing plasticky about using this machine. Even things like rubber feet that aren’t as ready to come off along with a non-slip rubberised finish for the underside show that we are dealing with a well-built computer.

It is small and light enough to stash in to a shoulder bag or “bike bag” for easy transport. It doesn’t matter whether you are doing a lot of travelling or simply visiting your favourite “second-office” cafe or lounge. 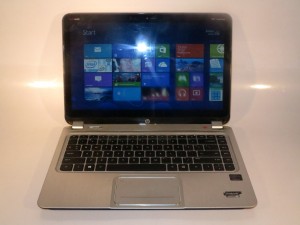 It feels slightly warm to use when you are using it on your knees, this not as ready to overheat for most computing tasks. This is due to the grillework on the top between the hinges and a ventilatilation grille underneath the Envy computer.

The Envy 4’s keyboard has that distinct feel that allows accurate touch-typing. Here, the keys are also finished in black rather than the matching grey so as to make them easier to identify.

he trackpad is very accurate but, like trackpads used on other recent-issue HP laptops, it has the enabe-disable function which requires you to dwell on the top left corner. This can cause you to mistakenly disable it if you are dragging an element and you take too long about it.

As for the touchscreen, it does its job with providing the coarse navigation and selection by responding properly and promptly.

The visual experience with the HP Envy 4 is what I have expected from a recent laptop where it can handle most tasks properly with a proper frame rate out of video playback. I wouldn’t expect this kind of performance for “on-edge” gaming or advanced video editing tasks.

The Beats Audio sound-tuning had done its bit in providing some “body” to the sound even through the integrated speakers which are located above the keyboard. But I would gain best performance out of this laptop for sound when I use headphones or external speakers.

Like the previously-reviewed Envy 4 Sleekbook, this HP Envy 4 Touchsmart Ultrabook uses the same “clothespeg” Ethernet socket so as to allow “dongle=free” connectivity to a Gigabit Ethernet segment. As well, there is a good complement of connections for use with current-generation peripherals such as an HDMI video connector and 3 USB sockets.

The 320Gb hard disk is big enough for most secondary-computer needs especially if you 00Gb hardmove data off it when you are finished with the data. But I would also like to see either a 256Gb solid-state disk for faster performance or a 500Gb hard disk for extra capacity available as an option. 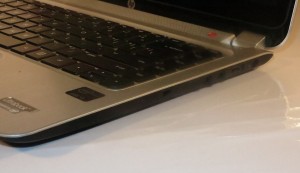 I am pleased that this computer still uses the SD card slot as removeable storage, which I consider important for those of us who download images from our digital cameras by removing the memory card out of the camera. This is compared to some Ultrabooks like the Dell XPS 13 which omit this feature, and would earn its keep with those of us who take pictures and coarsely edit them while on the road.

The HP Envy 4 is not demanding for battery life when subjected to most regular computing tasks especially if the computer is working with a Wi-Fi network.  But, after I watched a 90-minute video from SBS On-Demand, I found that the battery was at half capacity at the end of the video.

When I used the HP Envy 4 Touchsmart Ultrabook in the lounge at the Intercontinental Melbourne on Rialto hotel, the staff were amazed at the touchscreen interface that this computer has. This was a difference for them as they were used to guests who use the lounge as a “second office” using laptops and not touching the screen to work with the computer or the guests touching the screens on tablets and smartphones. 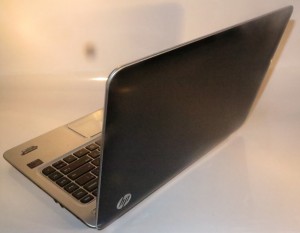 Rear view of the Ultrabook

One improvemeit I would like to see for the HP Envy 4 Touchsmart Ultrabook is the availability of a deluxe version with extra RAM and secondary storage as well as 802.11a/g/n Wi-Fi. As I have said before, this would encourage us to think of having more storage when we are on the go for longer times as well as having the computer be future proof for high-speed 5GHz Wi-Fi networks. Similarly, going for 3 USB 3.0 connectors can work well as we move towards more USB 3.0 peripherals like secondary-storage devices.

Other than, there isn’t much to improve on for a secondary travel computer with a large screen.

The HP Envy 4 Touchsmart Ultrabook earns its place as the logical successor to the Envy 4 Sleekbook. Here, it comes across as another example of a  lightweight secondary travel computer option where you value the  13”-14” screen. This is where you place value on content creation including creating elementary graphical content like PowerPoint slides or going through digital photos you have taken as well as creating written content on the go.

It then ends up alongside the HP Envy 4 Sleekbook, the Acer Aspire S3 and Sony VAIO T Series in my short list of ultraportable computers that I would use or recommend as a secondary portable computer for one who uses a desktop or larger laptop at home or the office.