I am reviewing the HP Envy 4 Sleekbook which is a 14” ultraportable which may not fit Intel’s description of an Ultrabook but which satisfies the same market. This is an ultraportable computer that is expected to serve as a secondary-duty unit with the technical specifications that match this requirement. But it has the 14″ screen that may be considered par for the course when it comes to “laptop-bridge” notebook computers that have a large-capacity hard disk, discrete graphics and an optical disk drive. 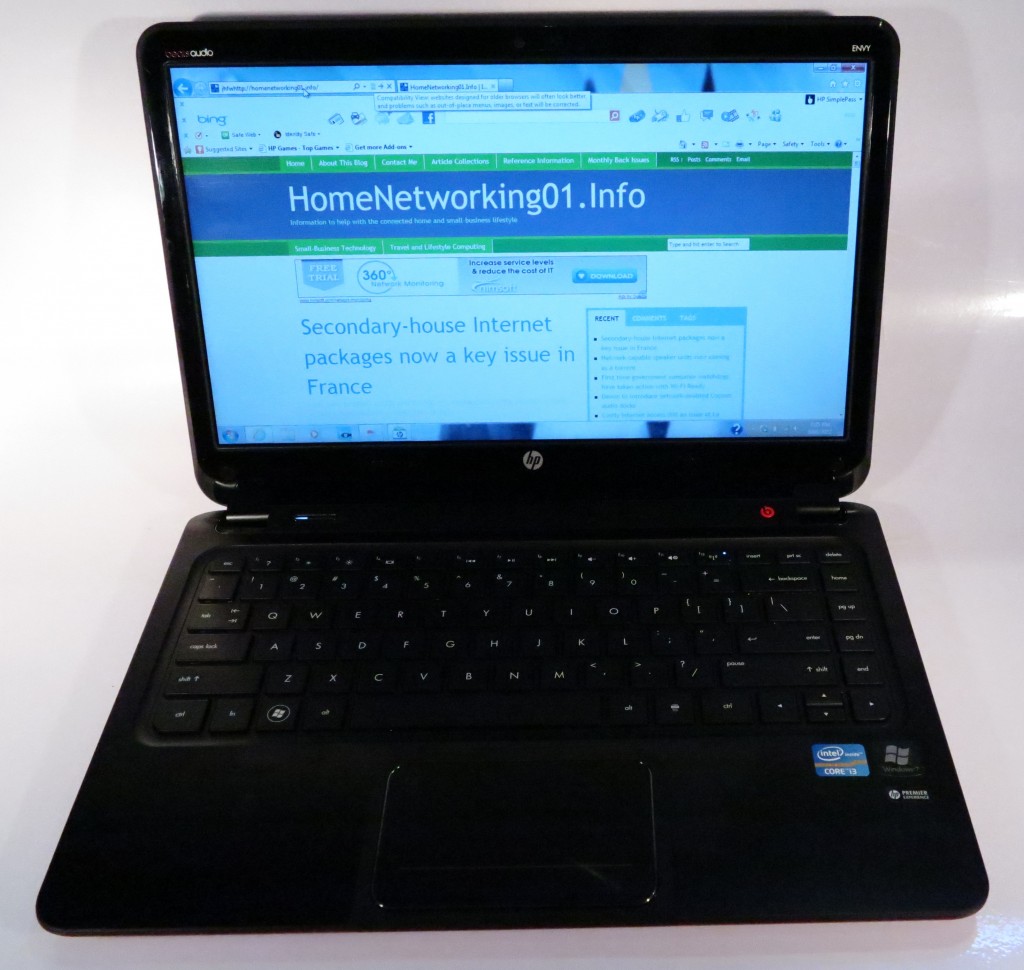 The Envy 4 Sleekbook is finished in a satin-black metal finish on the lid and escutcheon surrounding the keyboard area. There is a jet-black grille above the keyboard where the power switch is located and this is also where the speakers are located. There is a red rubber finish on the underside and this yields a non-slip quality which can also be less worrying for those of us who deal with polished furniture because of the reduced likelihood for scratching.

You may think that the 14” variant of an Ultrabook is going to be too heavy but this Sleekbook is not too heavy to be tiring to carry. It can go well in a shoulder bag or bike bag without becoming too cumbersome as well as allowing room for other stuff in this bag.

There is a vent grille underneath and this is important because of the tendency for this computer to run a bit warm on the left had side when handling heavy tasks like video. This can be a liability if you intend to have it in operation for a long time while you are in bed or sitting on the sofa. Here, I would recommend that you place the Sleekbook on a tray if you leave it on the bed or on the bedside table or coffee table when you get off your bed or couch.

The HP Envy 4 Sleekbook’s keyboard has a soft but hard feel. But this full-size keyboard does give you enough room to  touch-type comfortably without any errors or your hands feeling cramped. You have to use the Fn key to use the function keys like F5 to refresh your browser screen.

The trackpad bas o distinct touch-identifiable primary / secondary button zones so it becomes difficult to know where to click or right-click while you are touch-typing. This could be made better through a differently-textured button area or a “button ridge”.  Another issue that can trouble some users is that if they touch the top left hand corner twice, they can  defeat or enable touchpad. This is an action that is easy to mistake when double-tapping to double-click an option on the display

The Intel HD graphics subsystem can work well even with video content such as the on-demand TV content that I have viewed from SBS On-Demand. There was no blurring and the graphics had come through smoothly but it wouldn’t be suitable for intense gaming activities.

Like a lot of recent HP laptops, the Envy 4 Sleekbook is a “Beats Edition” unit which means that its audio subsystem has been “worked” by Dr. Dre’s “Beats Audio” team. This yielded a “full sound” through headphones or speakers whether with the on-demand video-drama content or some music I played through this laptop. Infact this has allowed the bass content to “come through” when I played a few music tracks through the integrated speakers, giving them what a classic 3” cone speaker used in most portable audio equipment would yield. 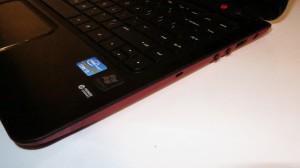 The Ethernet connection is a special socket that expands to take the common RJ45 plug but closes up to preserve the Envy 4 Sleekbook’s compact looks. As well, there are two USB 3.0 connectors here which become very relevant with this computer so you can offload data quickly to a USB 3.0-equipped external hard disk. This is augmented by a USB 2.0 connector on the right so you can plug in a wired external mouse or other device that uses this connection. There is only the HDMI vide connection for external video displays so you would have to use a USB DisplayLink VGA adaptor or the HDFury HDMI-VGA adaptor if you were to use the Sleekbook with an economy data projector.

The Sleekbook’s 32Gb hard disk has just about all of the space used as the main drive with a smaller partition used for the system-recovery data. At least this gives you a better idea of how much space you have used. Like other similar ultraportables, this computer doesn’t come with an optical drive, but this combination would suit its use as a secondary computer rather than as a main computer. 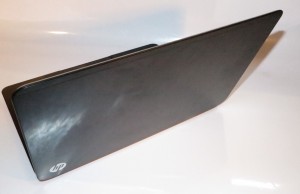 This computer is not demanding on the battery life through regular day-to-day operation but can go through the battery a bit more quickly with multimedia tasks like video-on-demand. I infact noticed that there was nearly half the capacity after watching the 1-hour video-on-demand content via the Wi-Fi network.

I would like to see the HP Envy 4 Sleekbook have an improved trackpad design that allows you to identify the primary and secondary buttons by touch. This could be achieved through a differently-textured surface or distinct ridges and grooves for the button zone.  Similarly, a secondary button could be used to turn the trackpad on on off without the need to mistake a double-tap action in a particular zone.

This ultraportable could benefit from a DisplayPort connection so as to exploit this newer technology and benefit from video adaptors that work to this standard. As well, it could work with a dual-band 802.11a/g/n wireless chipset so it can benefit from the unexploited 5GHz wireless-network band.

This notebook even looks the part in that hotel lounge

HP could do better with this model by offering a deluxe variant that has better options like the Intel i5 chipset, 6Gb RAM and either a solid-state drive or 500Gb hard disk across all markets. This can yield the possibility of retailers being able to use that model as a deal-maker.

I would position the HP Envy 4 Sleekbook as a computer for those who want a larger screen and that bit extra for a secondary portable computer for travelling. This is even if you are simply visiting that Wi-Fi-equipped cafe or hotel lounge as an “office away from the office”.

A convertible or a detachable–It’s Acer’s Switch 10