I am reviewing the Toshiba Satellite P870 which is a 17” desktop-replacement laptop that has a lot of features and expectations of a modest fully-equipped desktop in a laptop chassis. It is the first of its kind that I have reviewed that comes with Windows 8 but the lack of a touchscreen doesn’t really do the operating system justice.

There are some variants of this model including one variant that has all the multimedia fruit such as 16Gb system RAM, 1.5Tb hard-disk storage with 8Gb solid-state caching, a 1080p screen and a full Blu-Ray burner. 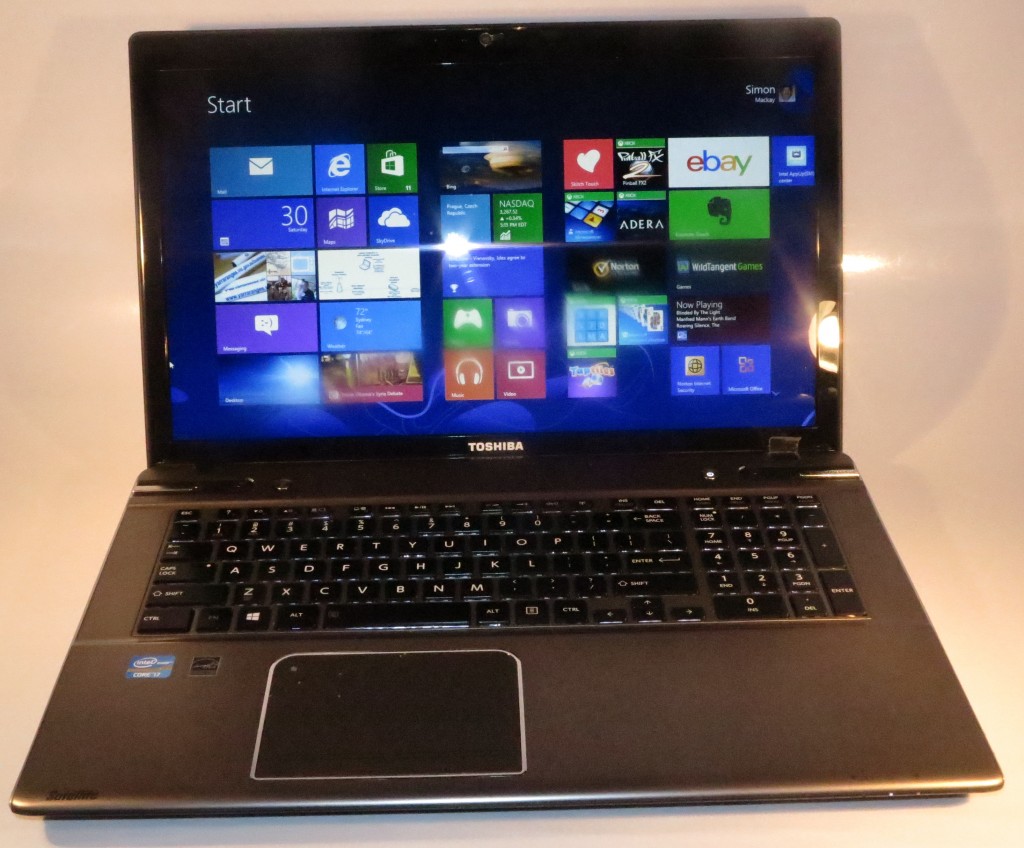 There is a lot of use of the aluminium panelling around the Toshiba Satellite P870’s keyboard escutcheon and palm rest as well as on the back of the lid. This provides for a use experience that feels more cool to the touch and less sweaty.

I have noticed the durable construction for a machine of its value as well as no overheating under normal use. Even video playback doesn’t cause the Toshiba to overheat. This means that you can use it on your knees without it feeling hot, and you don’t hear a fan kicking in, trying to cool the laptop down, as you use the computer.

The keyboard that the Toshiba Satellite P870 is equipped with has the backlit keys. But they are pretty slippery. On the other hand, the keys are easy to locate by touch and wide enough so you can touch-type comfortably.

There is a numeric keypad which is good for working spreadsheets, bookkeeping and other number-crunching applications.

The trackpad is overly sensitive when it comes to typing and the ability to disable it is very similar to what happens with recent HP laptops and can cause confusion. Personally, I would prefer that Toshiba maintain the separate hardware switch for controlling the trackpad. As well, I would prefer Windows 8 users to use a Bluetooth mouse for better control of the screen because this computer isn’t equipped with a touchscreen and the trackpad can take a fair bit of getting used to. 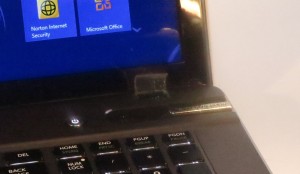 The visual experience for the Toshiba Satellite P870 was very smooth and responsive although you may not know what graphics mode you may be using for the application, thanks to the NVIDIA Optimus setup. Here, this engages discrete or integrated graphics depending on what you are doing as well as whether there is much battery runtime left in the computer’s battery.

When I played some music using Toshiba’s Media Player software, the laptop yielded full-response sound, thanks to the Harman-Kardon sound tuning. It didn’t sound wimpy and was adequate for a desktop replacement computer. Also, I was watching some content from SBS Video On Demand and found that the sound quality was impressive when it reproduced the dialogue and sound effects from the movie while I was using the integrated speakers. 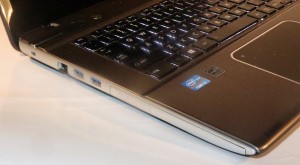 The Toshiba Satellite P870 has plenty of connections like a VGA and HDMI output, separate audio input and output jacks, Gigabit Ethernet and 4 USB ports. Three of these are the 3.0 variety for newer higher-performance peripherals while one of these is a 2.0 variety for external mice and similar peripherals. The USB 2.0 port also provides the user-selectable “Sleep and Charge” function so you can charge your mobile phone or other USB-charged gadgets from this laptop especially while it is plugged in to AC power. This function worked as expected when I set the Toshiba up to charge my Samsung Galaxy Note II smartphone and can be a bonus if you are in those areas where there aren’t many power outlets to plug mobile-phone charges in to. 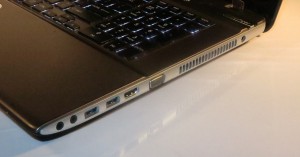 The hard-disk capacity for each of the variants of this model is realistic to current expectations for a desktop replacement especially where you intend to take the Toshiba between home and work. This is more so if you are a media packrat and you have heaps of digital pictures, music tracks and video material on the hard disk.

The release button on the optical drive is located on bevel underneath the laptop, and is asking for trouble due to accidental opening when the computer is switched on. Personally, I would have the switch located on the front of the optical-drive tray or, for the price position, I would prefer to run with a slot-load drive.

For regular use, the battery runtime is very good when you engage in most tasks. If you do intend to watch online video for longer than an hour, you have to make sure that the battery is charged up fully or you are using external power.Similarly playing a DVD would last for around two and a half hours from a full battery.

With this class of machine, I wouldn’t really expect to have a long-tine of battery use when engaging in multimedia.

The Toshiba Media app that come with this laptop is no crapware. Infact it worked tightly with the home network and was able to play what was on my WD MyBook World Edition network-attached storage clearly and reliably. 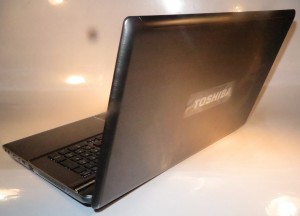 For a laptop of its price range, the Toshiba Satellite P870 could benefit from a touchscreen, which would make the Windows 8 user experience worthwhile. Similarly, the Wi-Fi network functionality could be set up for 802.11a/g/n dual-band across the range.

I would recommend the Toshiba Satellite P870 Series of desktop-replacement laptops for its purpose as a desktop-replacement computer rather than primarily for portable “on-the-road” use. This would be preferred by those who value the large screen for imaging, multimedia and related activities. It is one of these laptop computers that suit a person who lives out of their car boot (trunk) and only uses it in the location where they stay; or those of us who want to have a computer that they can easily move around the house or stow away in a drawer out of sight.