Over this past model-year, some manufacturers have been revealing desktop inkjet printers that aren’t the typical design for this class of home or small-business printer. The typical design is where a print head moves back and forwards over the narrow edge of an A4 / Letter document page or a scanner head faces upwards scanning the document which is placed on the glass platen face-down. Similarly this is where output and input trays jut out from each side of the inkjet printer.

At the moment, I am highlighting four printers that have been examples of these newer printers and what they can offer, rather than machines that have advanced-functionality software.

This business desktop inkjet printer implements a full-width printhead to print the document. Here, this allows the document to be printed very quickly rather than having the a small printhead move back and forwards over the page to be printed. This kind of mechanism is similar to how older dot-matrix impact “line printers”, or the thermal printer setups used in the old fax machines, receipt printing or some Brother and Pentax mobile printers marked what they were printing line by line.

It has allowed for the documents to be turned out very quickly in so much that the OfficeJet Pro X Series earned its place in the Guinness Book of World Records as the fastest desktop printer by turning out 500 sheets in 7 minutes 19.2 seconds using the fastest available colour mode. Other advantages included high colour accuracy which would yield high-quality documents due to the head not having to move across the document line by line.

Even the documents emerge from this printer in a similar manner to a laser printer. That is at the top of the machine, “easy-over” with the printed side of a single-side document or the odd pages of a double-side document facing down.

Here, the printer has been positioned as a competitor to the colour laser and LED printers that would satisfy a business’s colour-based “workhorse” printing needs. This is one such printer that could end up as a short-run “printing press” for a small-business’s promotional printing needs.

This new multifunction printer series from Brother uses the conventional printhead but has the long edge of the standard A4 / Letter document paper being fed in the the machine. It has allowed for a compact chassis for a conventional-feed inkjet printer. Even when the printer isn’t in action, the unit looks neat and trim and doesn’t take up much desktop space.

Based on the HP Envy 100 low-profile multifunction printer previously reviewed on HomeNetworking01.info, this printer uses that same ultra-slim chassis with a low-profile mechanism that is capable of printing both sides of a document. Here, it has the same aesthetics as a home video recorder made from the mid 1980s to the late 1990s, thus  being acceptable in the main lounge area. This is augmented with the way these printers close up when they aren’t printing anything but raise the front panel and expose a ledge when they are turning out a document.

But this printer uses a scanner that has its scan head integrated in to the see-through lid with documents laid out “sunny-side up” with the image facing you. It will allow you to make sure your photos are laid out in a manner that will have them be scanned properly. This is a different approach to designing the multifunction printer but it may yield issues when working with bound materials. 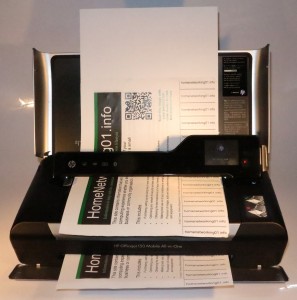 The low-profile printer-mechanism design that had taken place for the HP Envy printers had been extended to the HP OfficeJet 150 mobile multifunction printer which was reviewed on HomeNetworking01.info. In the same compact chassis that you would expect for a battery-operated mobile printer, you were able a unit that integrated a sheet-feed scanner as well as the printer, allowing you to scan documents in to your laptop computer or make a quick copy of an A4 document.

What I see of these printers is that HP and Brother are working towards printer designs that break from the norm and provide quicker output, increased document-handling flexibility or an ability to improve the device’s industrial design.