Previously, I have given the Sony VAIO Tap 20 “adaptive all-in-one” computer a fair bit of coverage on HomeNetworking01.info as a bridge between a tablet computer and a desktop computer. This included commenting on a Microsoft article where it was presented to the article author’s parents at their house to assess its prowess with different computing skill levels.

Now I have the chance to review this computer and see for myself what it is like as a representative of this new class of computer, especially as a “lifestyle computer”. 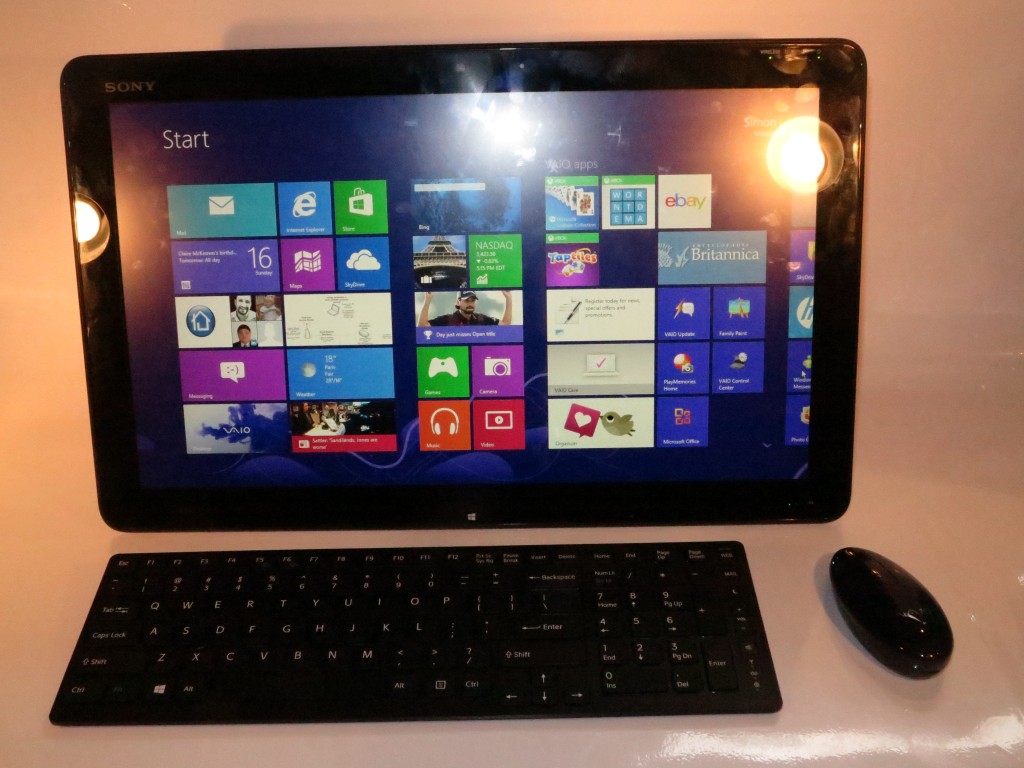 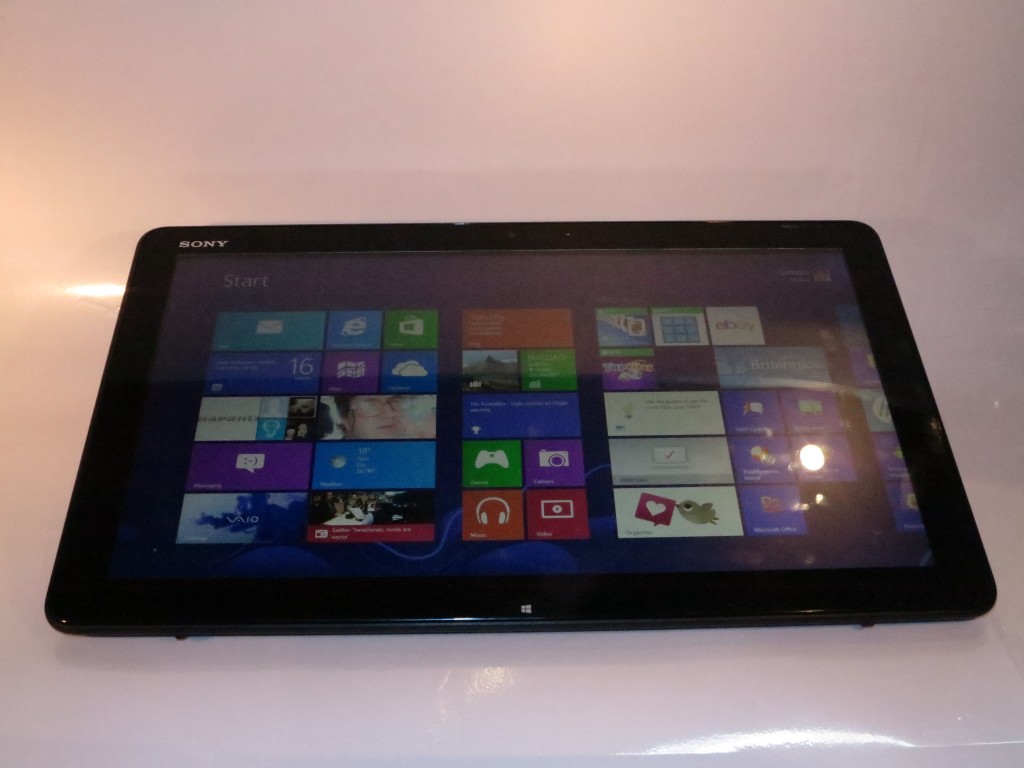 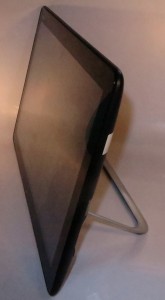 The VAIO Tap 20 using a simple kickstand for desktop use

The Sony VAIO Tap 20 can be set up to work as a desktop computer with its supplied wireless keyboard and mouse or it can be laid flat to work as a touchscreen-driven tablet computer. This appeals for a range of activities like game-playing or Web-browsing at the kitchen table to regular content creation at a desk.

The Sony VAIO Tap 20 has a style that can be described as being a large tablet computer or a large picture frame. There is the Windows button located at the bottom and a group of status lights located at the top of the screen.

The unit rests on a very sturdy aluminium kickstand which doesn’t slip but can double as a handle when you take the VAIO Tap 20 from room to room. This comes in to play even if you use the computer as a tablet in order to provide a useable operating angle when it is rested on a table or similar surface.

When I was watching an on-demand video throigh the VAIO Tap 20, I had not noticed any overheating. This is due to the use of venting on back of the computer to avoid heat build-up. There also wasn’t any heat build-up through regular use.

The supplied keyboard has a full numeric keypad plus access to system functions like volume control. It is able to sustain touch-typing comfortably nut you may find that a regular desktop keyboard may work better for this activity. It also has that hard feel which gives the proper feedback for when you type away on it.

The suppled wireless mouse works properly as expected for a three-button thumbwheel mouse and comes in handy for detailed navigation as would be expected.

The touchscreen works as expected for a large touchscreen and can serve well for coarse navigation of a desktop user interface or proper navigation of touch-optimised software like Windows 8’s “Modern” user interface. The large screen size can even allow you to type on the on-screen keyboard for longer periods, which can be useful if the wireless keyboard’s batteries died or you didn’t want to bother carrying the keyboard with you for a short bit of typing.

The VAIO Tap 20 has integrated NFC “touch-and-go” support but the sensor is located on the rear of the tablet unit. It does support what Windows 8 can do for NFC applications, especially the ability to transfer vCard contact data and Web-page URLs between this unit and Android devices. It may be able to do NFC data transfer for more data with Windows devices. 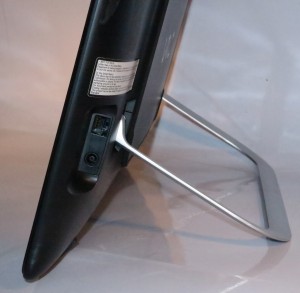 The touchscreen display works well for regular computing activities including Google Maps browsing. But it was able to perform smoothly and yield a good colour display for video playback as I observed with SBS On-Demand.

There is the glossy display surface which can be a problem under some lighting conditions and also can harbour fingermarks through regular use. But this is common with consumer-grade equipment.

The sound from the integrated speakers does sound “full” rather than “tinny” for most applications. But it has the volume that is good enough for close listening and wouldn’t be described as “room-filling”. I noticed this when I used TuneIn Radio to listen to Heart 106.2 London through the VAIO’s speakers while preparing the copy for this review.

The supplied VAIO Pictures and Music media browsers, available through the Windows 8 “Modern” user interface work properly as media browsers whether the media is on local storage or on a DLNA-compliant network-attached storage device. 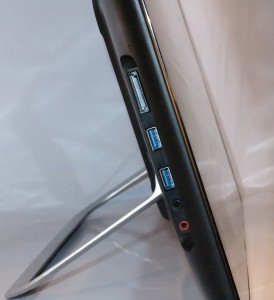 I wouldn’t expect the battery in the Sony VAIO Tap 20 to run for more than four hours with regular work because of the large screen area. Even watching an hour-long on-demand TV show had the Tap 20 register half battery capacity even when I started watching it on full capacity. Here, the battery can serve as continuity when you move it between different areas or for short amounts of use away from AC power.

It is something that will be expected out of this class of “adaptive all-in-one” computer as these are pitched simply as transportable computers.

The Sony VAIO Tap 20 has 2 USB 3.0 ports and a pair of 3.5mm stereo jacks for audio input and output. Unlike most other computers, it doesn’t have the ability to connect to an external video display, which may not be of concern for its role as a home “lifestyle” computer. If you wanted to use an external display, you would need to use a USB DisplayLink adaptor or network display link such as one based on Intel WiDi technology.

As for a network, it can connect to an 802.11g or n Wi-Fi segment or a Gigabit Ethernet wired segment, which is typical for most of these computers. It can also connect to Bluetooth wireless peripherals and even supports the Bluetooth 4.0 Smart Ready connection specification, which can allow for sensor devices, keyboards, mice and similar devices to be designed for battery economy.

I had shown this computer to the lady of the house who has some elementary computer skills and she was impressed with the large screen and its substantial weight but saw it as a different kettle of fish to her Apple iPad tablet. She reckoned that it may work well as a transportable desktop computer for an application we were talking about where this unit may be used on a dining table and be easy to clear up when when it comes time to set the table for dinner.

The NFC sensor could be duplicated on the front of the VAIO Tap 20 so you can easily use it with smaller devices like Android smartphones or when using NFC to set up wireless peripherals. As well, the kickstand could benefit from a rubber grip along the long edge so as to avoid the risk of good furniture being scratched.

I would recommend that Sony provide an optional expansion module / docking station similar to what was available for the VAIO Z Series notebooks for this unit. This is where it had an optical drive and extra USB ports for use at the main desktop computing location. A USB digital-TV tuner module could come in handy as an option, making it work well as the supplementary kitchen TV. Similarly, Sony could also offer a bag or caddy to make it easier to transport the keyboard and mouse with the computer.

Sony could also provide a “performance” variant which uses an Intel i7 CPU, extra RAM and discrete graphics for those who value higher system performance. This could be used as a way to develop the product line further.

The Sony VAIO Tap 20 fits in between a 17” desktop-replacement laptop computer and a tyical “all-in-one” desktop computer as a regular computer that can be easily taken around the house or stored away when not needed.

Here this would work well where you want a large-screen tablet computer that can be stood up or laid flat on a bench or table for Web browsing and similar tasks; or a computer that can be used in the conventional form with a keyboard for content creation. It would underscore the VAIO Tap 20’s role as an alternative to the iPad or regular laptop for a common transportable “casual-use” computer and could fit the bill as a “lifestyle computer”.