I am reviewing the Denon Urban Raver AH-D320 headset which is a circum-aural headset that can be used with smartphones or as a pair of regular headphones with other audio equipment. These headphones are pitched for most popular music such as dance music by having a strong bass response that can accent the bass line and rhythm. 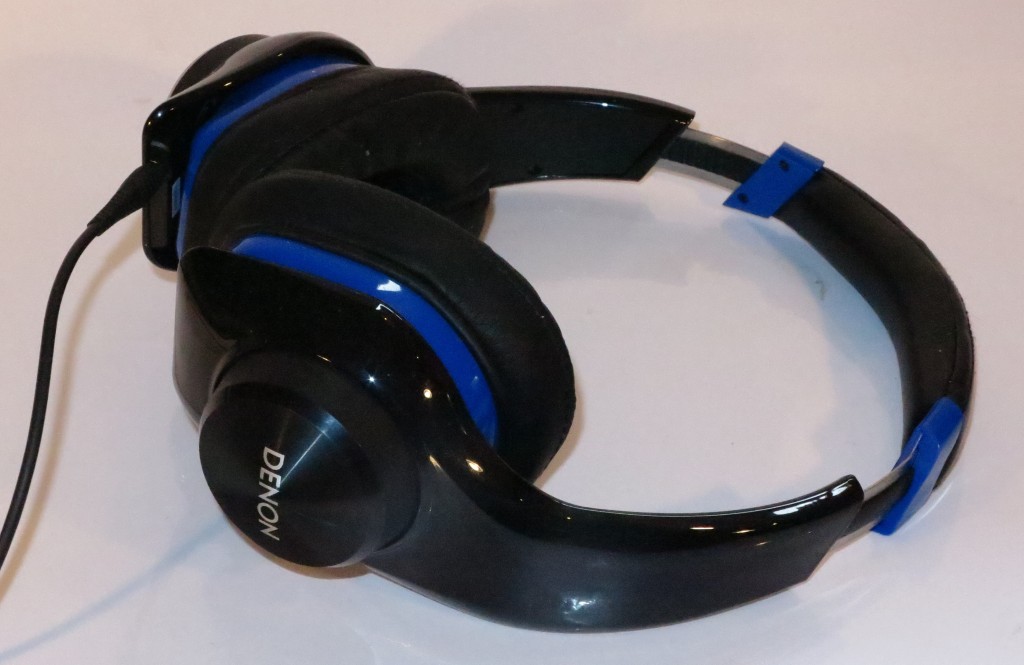 The Denon Urban Raver AH-D320 headset is a well-built unit with a circum-aural solid-back earpiece design thus allowing for the strong bass response. They are available either with blue highlights or red highlights.

A feature that I admire with the Denon Urban Raver AH-D320 headset is the use of a detachable cord which is able to be unplugged from the headset itself. This allows for a user to replace the cord with another one should the cord is damaged which is something that commonly happens with many headphones and earphones, often having the user write off a pair of headphones when this happens.

The fact that the microphone and controls are integrated in one of the earpieces rather than an inline pod or a boom attached to the headset, and the headset uses a single-sided connection as well means that a simple four-conductor cable with a 3.5mm four-conductor plug at each end can be bought or made up easily should something happen to the cable. It also does away with the need for a boom which can be easily broken off through regular use.

This headset worked with my Sansung Galaxy Note II phone as a proper smartphone headset. The limitation here with Android phones is that the only remote control ability is the multifunction button functionality for starting and stopping music or answering / ending calls. 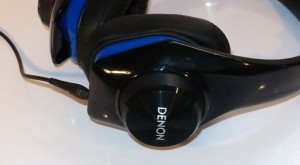 Where the mocrophone and smartphone-control knob is on these headphones

As for durability, these headphones look to me as though they could last a long time. This is through the absence of any earcup supports that could easily break after a fair bit of use and the wiring that exists to pass the sound to the other earcup isn’t just a wire integrated in the headband. Instead there is the use of metal strips that are pat of the headband’s design when you adjust the headphones for your head that does the job.

The Denon Urban Raver AH-D320 headset felt tight but didn’t feel very “sticky” even for long journeys. As well, I hadn’t noticed the headband very much because of the use of an appropriate amount of padding. Here, you could wear these “cans” for a significant amount of time without them becoming uncomfortable.

The Denon Urban Raver AH-D320 headset is very efficient in that you don’t need to turn the volume up to have the sound come through clearly. This is a bonus for headsets that are pitched for portable equipment like smartphones and tablets because if you don’t need to turn the equipment up loud to gain that ideal sound, you are saving on battery runtime. As well, there is a chance for the headset to sound its best without requiring the device’s amplifier to clip.

The music comes across with a lot more bite across the frequencies thus being able to sound clear and without any colouring which could cause fatigue.

I have noticed the very tight bass response but these headphones can sound muddled on some tracks where there is a lot of competition in the bass end such as a bass-guitar along with drums. The other instruments do come across clearly even though there is the preference for the bass response on this headset.

As for use in noisy environments, the Denon Urban Raver AH-D320s worked well by providing some noise reduction. I had used them in the CBD (downtown area) of Melbourne and noticed some reduction in the city noise but was able to hear essential noises that alert me to vehicle presence.

As well, I had noticed a distinct noise reduction when I was using them while sitting up the back of a regular transit bus through a long journey. Here, I was able to hear the program content from my phone even as the bus was at cruising speed and had noticed less of the engine noise. This would improve on their suitability for people who ride on diesel trains or buses where there is the increased noise during travel.

I let some friends who are in to funk, soul, 70s-era American disco and related music try the Denon Urban Raver AH-D320 headphones with their Samsung phones which were full with this music. They tried it with Daft Punk’s northen-summer party anthem of 2013 “Get Lucky” and Stevie Wonder’s classic “Jammin’” and were very impressed with the way these headphones came across with these numbers. One of them who used to be a DJ in the disco heyday of the 70s found that these headphones had a better response to the $1000 cans he used in those days.

They, like other headset manufacturers could provide an inline switch on the cable for switching between Apple or OMTP headset wiring to provide maximum compatibility with smartphones or other communications devices that use either wiring.

Another point of improvement, which could lead to a model variation, would be to offer a Bluetooth wireless variant. Here, they can offer the wireless link that a lot of us crave for our mobile devices.

I would recommend the Denon Urban Raver AH-D320 headset as a cost-effective decent headset that does justice to most popular music. Here, these headphones could come in to play as a step-up from that pair of cheaper headphones that you use with your smartphone or media player or could work as a pair of DJ “cue” headphones.

They would also be a good gift idea for something to give someone who is in to rock, soul, dance or similar popular music and a group of people who pitch in together for these headphones, like a couple or family, can ease the burden when it comes to purchasing these as a gift.

After realising that there was a friend of mine loves his rock music wery much, I have purchased a set of these headphones close to Christmas to give to him as a gift. I was able to purchase the set for AUD$99 off the recommended retail price effectively from the distributor’s warehouse door.

The perfect expansion module for those Ultrabooks