Most of the printers in this series have auto-duplex printing and Wi-Fi wireless connectivity . The top-most models in this series offer an automatic-document feeder and, in some cases, Ethernet connectivity while the flagship fax-equipped model can support NFC-based printing for your Android-based mobile devices. 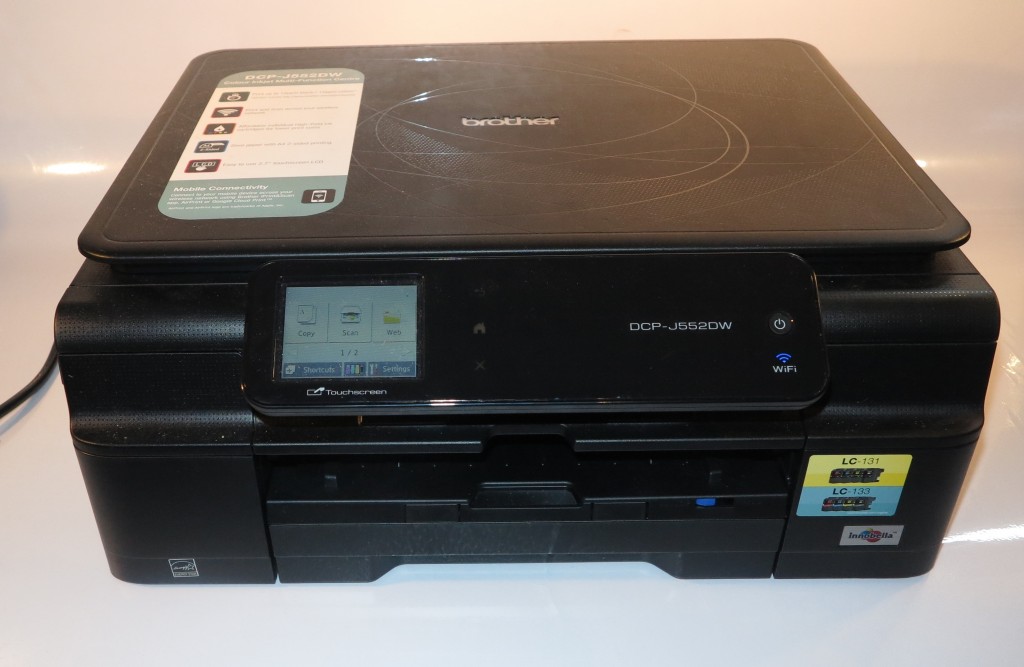 Officeworks does sell a pack which has each of the colours as a high-capacity cartridge for AUD$78.31.along with a pack that has all of the cartridges plus a supply of “snapshot” paper for AUD$126.

Like most of the Brother inkjet printers, the DCP-J552DW is easy to set up. You may find this confusing at first when you receive a brand-new machine that your starter supply of ink cartridges are taped in a bag above the paper tray and effectively in the printerrather than strewn in the box. 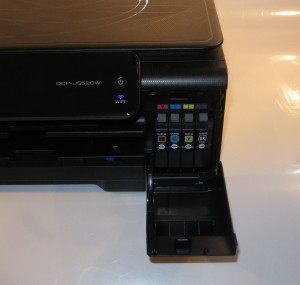 Ink cartridges loaded in the front

These inks are able to be installed quickly through the use of a front-loading compartment. But it takes five to ten minutes for the Brother printer to effectively get itself ready when have just installed the ink cartridges and is due to the nature of the piezoelectric inkjet system.

Like the Brother DCP-J925DW, this printer uses an A4 paper tray which also has a mezzanine tray for loading a small supply of “snapshot-size” inkjet paper for printing out copies of your digital photos.

As for integration with the network, you are able to use the printer’s touchscreen to enter your network’s parameters or start a WPS setup routine. Like an incresing number of network-capable consumer multifunction printers, the Brother DCP-J552DW uses Wi-Fi wireless connectivity only.

There is the usual collection of “walk-up” functions available on this printer and, for that matter, this printer does them the right way. Herem the user interface is through a touchscreen which offers a highly-flexible level of functionality. There is even the ability to set up “preset tasks” for common scanning and copying scenarios such as double-sided copy or ID copy.

For copying, there is a lid that you can pull up by its sides in order to improve the quality of copies made from bound materials. Very often, this is a job that is often performed to make recipes, music pieces and similar work available in a portable manner or to avoid losing or damaging the cookbook or music book when you are using it.

Like the previously reviewed Brother MFC-J410DW landscape-printing multifunction printer, this unit supports the ability to print from Web services. Here, you use the Brother Web Connect page to link your printer with Dropbox, Facebook and co to print resources on these sites. This is actually the formation of Brother establishing a Web app platform with scan-to-email and outline copy / scan functionality.

In my opinion, who knows whether Brother will link all of their device classes i.e. these printers, the label printers and their craft equipment especially the high-end embroidery machines with this app platform.

The driver’s setup routine for the Brother DCP-J552DW leaves a lot to be desired because it doesn’t automatically detect the printer quickly. Here it required me to enter in the printer’s IP address or Node name, these details which I was able to find on the printer’s control panel display under Settings – Wi-Fi. Other than that, the driver and other software worked properly when I had it in place.

The supplied software does appear easy to use in a similar vein to what is typically offiered with this class of printer. There is even a “pop-up” help function so you can seek further help with the printer. Of course, this software doesn’t place unneccessary visual or performance load on the computer by running unnecessary print monitors.

The Brother DCP-J552DW printer turned out the print jobs pretty slowly and dwelled for a few seconds after slightly retracting the paper when printing both sides of a document in a similar vein to previous Canon printers that I have reviewed.

I have run a test concerning the printer’s auto-duplex abilities and there is no unwanted shift going on with the paper when it is printing on both sides. This makes it work well for turning out luggage tags and other documents that implement odd page sizes. As well, it covered the whole sheet of paper when printing a document on both sides.

For document printing, the Brother DCP-J552DW works well, yielding sharp text but doesn’t yield the strong sharp colours. But phtot printing tends to come up with reduced contrast and definition along with less of the colour saturation compared to some of the other consumer multifunctions that I have tested. It is more like a lower-tier office multifunction printer.

I have done a few scanning jobs using the Brother DCP-J552DW and have noticed these observations. Firstly, if you are scanning a document, the on-device user interface allows for multi-page PDF scans by asking the user if they want to scan another page after the printer has scanned the current page. If they touch “Yes” on the screen, the printer will prompt them to load the next page and start scanning. For accuracy, the printer performed as expected for an average multifunction device for both the photos and the business documents.

For connectivity, I would like to see Brother implement HomePlug AV2 in their SOHO printers as an alternative network technology, or resist the temptation to eschew the Ethernet socket on these printers because Wi-Fi wireless networking doesn’t always work out due to the nature of the radio technology. Similarly, Brother could move towards support for 5GHz Wi-Fi technology as this band opens up as an uncluttered home-network Wi-Fi band.

Like with most of the multifunction printers, I would like to see these printers have increased onboard memory to cache print jobs to avoid waiting on host computers or networks for the data. This can allow for quicker printing and support heavy print runs more easily.

To improve on useability, the Brother DCP-J552DW and its peers could benefit from contrasted page marking on the edge of the scanning platen, especially the “reference corner” of the platen. This is so you can easily know where to position documents for scanning.

I am finding that the Brother DCP-J552DW and the MFC-J470DW fax-capable peer fit in well as a budget or entry-level printer that could fit in well in the home as a cost-effective solution for a common printer for that household. This is although I am seeing this machines trying to snap at the heels of HP’s Photosmart series of multifunction printers like the Photosmart 5520 with the 4-cartridge print mechanisms.

Here, it would perform well as a regular document machine rather than a photo-printing machine and, due to the use of individual ink cartridges for each colour, could be the cost-effective printer that you can still afford to run.

.It would be better value to run this printer primarily on the Brother LC-133 series of high-capacity cartridges to gain better value out of it. Even buying a multi-pack may also come across as being worth it so you keep an extra cartridge on hand for each colour to avoid problems that can easily happen with piezoelectric inkjet printing mechanisms.