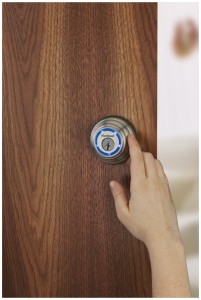 Kwikset have released the first door lock to exploit the nascent Bluetooth Smart technology that is part of the iPhone 4 onwards as well as an increasing number of Android and Blackberry smartphones.

Like most of these “cutting-edge” electromechanical door locks, this unit is a “bore-through” cylindrical deadbolt, most likely because this form-factor is considered very popular on the American house’s front door. From the outside, the Kevo deadbolt looks like any other lock of this type but has a distinct blue ring that lights up under certain circumstances. This, and the fact that it still works with the regular key, keeps a perceived aesthetic and useability comfort zone that householders have valued with these locks.

But the Kevo deadbolt implements a proximity-based operation technique where you have a supplied key fob or a smartphone running the Kwikset Kevo app acting as the virtual key fob releasing this lock when you are near it from the outside. This will light up the blue ring on the outside and you touch the lock’s bezel to cause the bolt to retract/

Like most, if not all. of these “smart-locks”, the Kwikset deadbolt is its own access-control system with the ability to log when a person has opened the door. It also supports time-limited and “one-shot” keys so you can limit when a person has access to the premises, which is a boon with most of us who engage tradespeople, carers or even want to have friends and family around and factor in early arrivals. This even supports the ability to allow a user to send a key via email to another user which can play its part in many different ways such as a family member or friend who is lodging at your house while they are in town.

But the Kwikset Kevo deadbolt is more or less standalone in nature and not able to work with a home network. Personally, I would like to see this and other locks of this kind support the integration with home networks and home-automation systems either at purchase or through an aftermarket kit that exposes these functions to the network technology that you are using at a later date. The reason I support the use of an aftermarket kit is the fact that these products can be in service for many many years and upgrading towards newer network functionality should avoid the need to junk a perfectly good lockset.

This is one of many trends that are affecting the residential door lock and bringing this device towards the online and mobile era.