The Bluetooth A2DP audio playback setup which provides a wireless link between a mobile device and a sound system or Bluetooth speaker has now brought along its own set of complications. This is something that will show up more as the number of Bluetooth-capable wireless speakers, audio adaptors and music systems in circulation increases.

One main complication is that the last-connected Bluetooth-capable source device “lays claim” to the Bluetooth-capable sound system until either device’s Bluetooth functionality is turned off. This is even though the user of that source device stopped playing the audio content using the media player and can cause complications where, for example, an “established” Bluetooth device like a tablet cannot be used with the sound system it is normally used with because a guest “walked up” to the sound system and paired their iPhone full of their music collection to that unit to play some of their tunes.

The practice is expected to be common with music systems that are operated during a party where you want to let a guest “look after the tunes” for the evening; and will become common with cars when a group of people go on a long journey and one of these passengers offers to “look after the tunes” for a part of the trip. At the Australian Audio And AV Show 2013, the people who were demonstrating the Aktimate active speakers with a Bluetooth adaptor allowed me to try the speakers with a track on my phone but asked me to make sure the Bluetooth on my phone is off or the speakers removed from the phone’s devices list after I had finished playing the music. 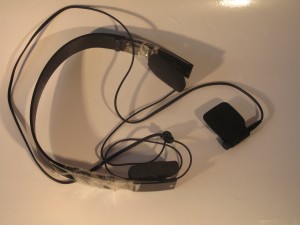 Two or more devices paired to the one Bluetooth headset and on in the same vicinity may cause problems.

It can also show up when you use the same Bluetooth headset or audio adaptor amongst a group of devices which is common when you want to use your headset with your smartphone while walking down the street or use it with your laptop to make that Skype or Lync call.

How do you handle this situation

The recent versions of the Android mobile operating system handle this better by allowing a Bluetooth device to be “disconnected” without the Android smartphone or tablet losing its paring data. Here, you enter the Android Bluetooth menu to tap on the currently-connected device to disconnect it immediately.  The ability to retain the pairing is important if you are using a particular Bluetooth device regularly such as a car sound system in the car you regularly drive or a commonly-used Bluetooth-capable hi-fi setup.

Unpairing or removing the device from your operating system

Most other desktop and mobile platforms require you to “remove” or “”unpair” the music system from the Bluetooth-capable source device. Then if you want to use the same Bluetooth device again, you have to put that device in to pairing mode which typically requires you to press and hold a button to invoke this mode; and use the operating system’s Bluetooth menu or “Add New Device” menu to add or pair with a new Bluetooth device.

In Windows, this requires you to go to the Devices Menu, select the device and select the Remove option to remove the sound system. There is the Bluetooth icon in the Taskbar which has the right-click option to “Show Connected Devices” to bring up all the Bluetooth devices associated with your system.

For iOS, you may have to go to the Bluetooth menu under Settings – General. and touch “Unpair” to detach the sound system.

Support for “connect / disconnect” on all desktop and mobile operating systems

An improvement that needs to be able to exist for an operating system’s Bluetooth functionality is to allow the user to logically “connect” and “disconnect” a Bluetooth peripheral manually. Here, the parings are retained in the host device while it is disconnected yet, when you connect, they come in to play as part of attempting to connect up with the device. This doesn’t remove the ability for a device to immediately connect when it is paired but  allows it to stay paired without being connected.

We are starting to see some Bluetooth headsets, speakers and in-car setups able to support multiple connections to different devices. This is typically to facilitate a media-player-only device like an Apple iPod Touch to play content while the device serves as a hands-free for a smartphone that is not necessarily used as a media player. Sony has made an effort with their SBH-20 Bluetooth headset adaptor to support the multiple-connection requirement for two smartphones thus facilitating one-touch answer from either phone.

Automotive implementations could allow multiple smartphones to connect with one being determined as a “primary” device for making and taking calls and receiving messages and others determined as either “secondary” devices used primarily to take calls or as “media-player” devices that only play media.

This issue of having Bluetooth devices, especially Bluetooth audio devices, work with multiple host computing devices is something that has caused headaches and will be doing so until the people designing the operating systems and devices can handle this reality properly and easily.

Computers or other devices perform better after a reboot–why this?