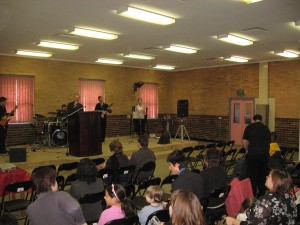 A situation that comes across any small organisation, including non-profit organisations, is the need to purchase capital equipment such as computer equipment. This happens typically at the start of the organisation’s life, when the organisation is embarking on a newer effort or as the time comes to replace older tired equipment.

There is a great risk of buying the cheapest equipment around and finding that the equipment may not do the job adequately through its service life. In a lot of situations, you may find that the equipment won’t satisfy newer requirements like newer connectivity types or newer versions of the same software. The worst case is when you deal with equipment that fails too early thus requiring you to consider replacing it with newer equipment too soon. 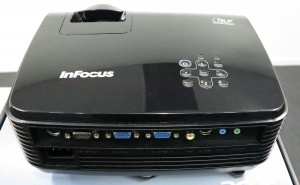 A typical low-end data projector used by a small church – only has VGA for advanced video connections and uses 4:3 as native aspect ratio

Just lately, I had moved to a newer church congregation and the pastor asked me for assistance regarding specifying a newer computer to replace the existing unit that was being used to show song lyrics and other video material during services. This happened quite a few months after another church pastor whom I know very well approached me for assistance to confirm he was on the right track when purchasing a colour LED printer. He also approached me again regarding the purchase of a newer projector for the church because the existing projector was at the end of its useful life.

I have previously covered this issue in a few articles about the availability of hardware and software that answers these organisations’ needs at a price they can afford as well as being easy to operate. One of these was about low-end data projectors that didn’t come with HDMI connectivity even though most current-issue video peripherals implement this connectivity while another was about the availability of AV playout software that answers the needs of these organisations at a price they can afford.

It is so tempting for organisations that run on hairline budgets like both these congregations to buy just on the cheapest price without factoring in the right specifications for the equipment or the equipment’s durability. This leads you to buying equipment that falls short of your current or future usage requirements or, at worst, purchasing equipment that won’t last for the long haul. 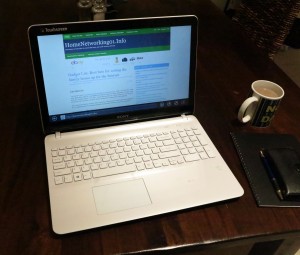 Firstly, you have to determine what kind of equipment should be used for your task. Here, you identify the task you are putting the equipment to and skew the specifications accordingly. For example, a computer doing video-based tasks like video playout or video editing should work with a discrete display subsystem so it performs properly at these tasks.

As well, you place weight on specifications and standards that promote flexibility and avoid rapid obsolescence. These include use of hardware and software interfaces that are accepted for the product’s type. For example, I place weight on HDMI connectivity for display projectors so that they can be used not just with computers but with any video peripheral that is on the market nowadays,

This is also the time you approach others in your community who are knowledgeable about the kind of equipment you are after and ask them for their advice. It is preferable to approach those who aren’t in the position of selling the equipment themselves but who may be involved in a support, media or advisory role such as company IT staff. This is because they aren’t under pressure to sell particular equipment.

In both cases, I looked for and specified up-to-date equipment that is to serve their needs properly for a long time so that the equipment is cheaper to run over the long haul. The factors that I thought of as being important was the ability to work not just with existing equipment but with newer equipment and to newer specifications. For example, in my congregation, I pushed for the computer to have HDMI connectivity and a graphics subsystem that can work at 1080p resolution. This is due to the fact that newer projectors offered at price ranges affordable to small businesses and community organisations will support these standards by the time the existing projector is due to be replaced.

Working from the same minimum specification that you have determined for your equipment, you then also identify a budget that you can afford but allows you to obtain reasonable-standard equipment. Then you go about obtaining price quotes from different vendors.

I obtained two quotes for the equipment with the same specification and passed the cheapest one of these on to my pastor who also obtained another quote for similarly-specified equipment. The idea behind having the many quotes allows for him to “haggle over” the right deal which is focused on value when it comes to purchasing the right equipment. You may also find that the just-superseded model that is being offered for clearance may become the option to go for as a way of saving money. This will typically happen as newer models are just being launched and the shopkeepers have to get rid of the older-model inventory to make way for the new models. 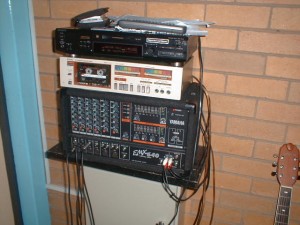 In some cases, you may find that particular vendors are consistently offering the right level of functionality and reliability for the right price. This may apply all across their product range or to a particular model in their product range and its successor models. Two examples that come to mind for me are the Sony MDS-JE520 MiniDisc deck and the Sony BDP-S390 Blu-Ray Disc player. Both of these units had the right functionality for their tasks with the MiniDisc deck being a reliable affordably-priced well-built unit having a comprehensive display and “auto-pause” which increased its appeal as an audio playout deck for churches, drama groups, community radio and the like; and the Blu-Ray player having full DLNA and Internet video functionality along with reliable Blu-Ray playback at an affordable price.

As well, this kind of specification and purchasing encourages suppliers to answer the call by these organisations to supply equipment and software that fits these needs at a price they can afford. For that matter, if you have questions about purchasing the right equipment for your needs, please don’t hesitate to contact me by using the Contact Form on this site.

Should I buy a secondary printer for my home network?

Buying that piece of computer hardware or software? Shop around

Should I buy a laptop with integral mobile-broadband modem?