I am reviewing the Sony VAIO Fit 15E laptop computer which is Sony’s latest take of the VAIO E series of mainstream laptop computers. This is where these computers come with the 15” screen and extra secondary storage, in some cases an optical drive of some sort.

Sony offers a variant with an Intel i7 processor and 8Gb of RAM as the deluxe option but that is all that they offer to make it worthwhile whereas I would like to see a few more features like a higher-resolution display offered as a more convincing upsell for most people. 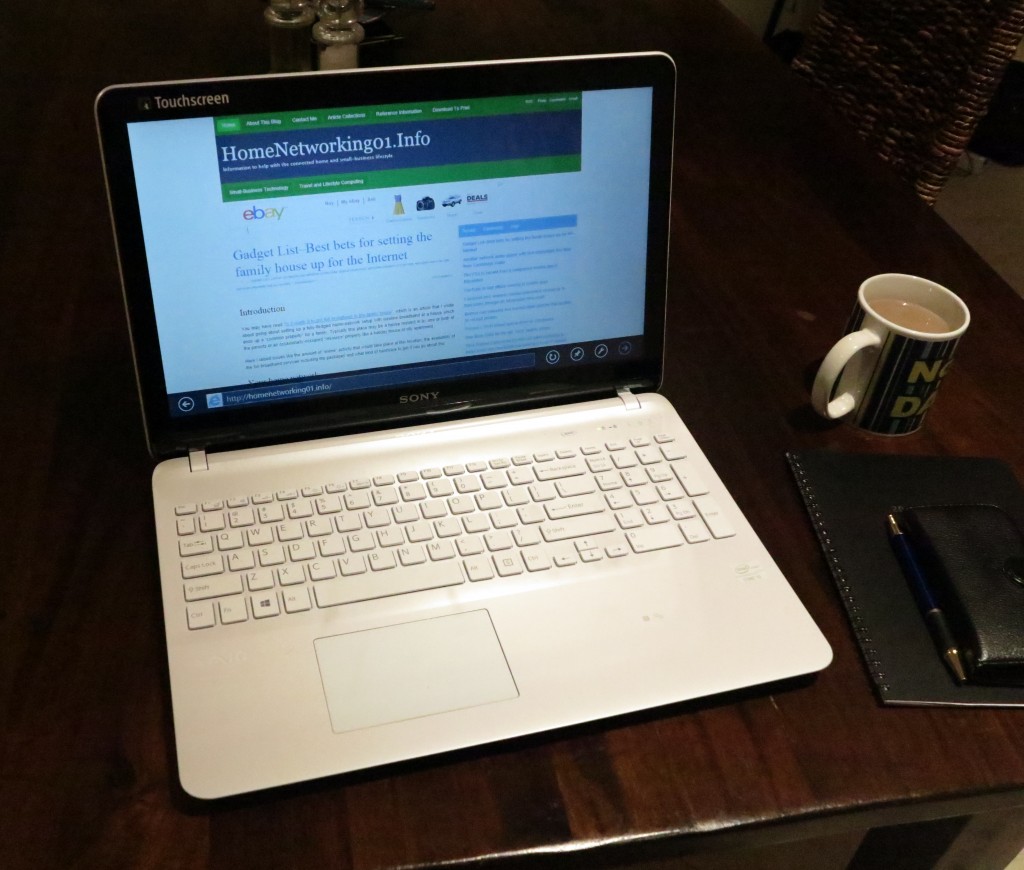 The VAIO Fit 15e series comes as a regular clamshell laptop computer but has a touchscreen like the previously-reviewed HP Envy4 Touchsmart Ultrabook. The action associated with this computer is very durable.

As I opened with, this laptop is equipped with a DVD burner which raises mainstream laptop credentials while satisfying realities with software, especially games, that are still delivered on optical disc.

There is a reduced chance of heat build-up with the computer having ventilation slots on the underneath as well as the sides. This makes the laptop more comfortable to use on your lap as well as less likelihood of the performance suffering due to heat stress.

This model is available in black, pink or white with the white variant, which I am reviewing, appeals to those of us who want to personalise it more.

The Sony VAIO Fit 15e’s keyboard is a chiclet-style keyboard but is commensurate to touch-typing thus making it comfortable to use for a laptop keyboard. This along with the numeric keypad ticks the boxes when it comes to a highly practical keyboard surface for a mainstream laptop.

The trackpad sometimes acts in a jumpy manner when you are typing but could benefit from a hardware switch to turn off trackpad. 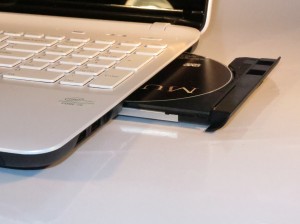 There is an NFC reader on the palm rest and it worked properly with my Samsung Galaxy Note II Android mobile phone. But its implementation in the laptop would take off if there were some quality Windows 8 applications or Android / Windows 8 app ecosystems that took advantage of it.

The touchscreen also comes across as being very accurate and responsive, making it suitable for coarse navigation.

The VAIO Fit 15e’s graphics system is based around a NVIDIA discrete chipset and Intel HD 4000 integrated graphics. NVIDIA even implements the Optimus function which switches over between these graphics subsystems when the goal is battery economy or graphics performance.

There is the glossy screen which bedevils most consumer-grade laptop computers and requires them to be very bright when used outdoors. This can frustrate users when it comes to battery runtime. 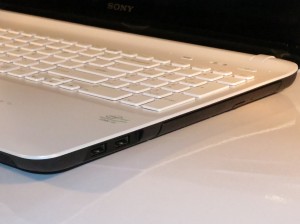 Sony have implemented a 2.1 speaker arrangement which has a separate bass driver that provides some “kick” in the sound. This can be a bonus when you can only use the integrated speakers for portability but headphones or external equipment for better sound.

This laptop has 4 of the USB connectors with two being a USB 3.0 type for external storage. As for video display connectivity, you only have an HDMI socket which rules out older and cheaper data projectors for a larger screen. There are separate audio input and audio output jacks on the left for connecting headphones or a microphone. 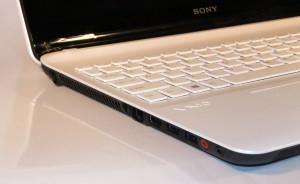 Across the VAIO Fit 15e platform, the secondary-storage options are the same with 750Gb on the hard disk and a DVD burner which still is relevant in this day and age. This is relevant for activities like cost-effective data sharing or if your comfort zone for music, video and PC games is still the “bricks-and-mortar” shop. As well, the SD card slot is located on the front of the laptop at the centre.

The VAIO Fit 15e’s battery performed properly for day-to-day regular use. This was augmented by a properly-implemented sleep functionality allowing me to use the laptop over two days without needing to charge it.

For playing a DVD, the VAIO could make it through the feature movie and end up with 10% of remaining battery runtime. This is something I would expect for most of the consumer mainstream laptops and may limit them for long-term portable multimedia and gaming activities.

I took this laptop with me to Ballarat when I was seeing a close friend of mine for the weekend and this friend was impressed with the fact that the computer was equipped with a touchscreen that worked tightly with the Windows 8 user experience. Like most people, he hasn’t come across a mainstream 15” consumer or small-business laptop that was equipped with a touchscreen. He was also impressed with the build quality of this machine and described it as being a good quality substitute for most mainstream laptops like the ThinkPad.

Sony could equip the higher-end variant of the VAIO Fit 15E with more options than just the more powerful processor and increased RAM in order to make for a convincing upsell option. Here, they could offer a BD-ROM / DVD burner as the optical drive, a 1080p Full HD display and / or dual-band Wi-Fi networking and / or a higher-capacity hard-disk for secondary storage.

These could allow Sony to create three variants with the same screen size and pitched at the same market as car builders like Ford and Holden have done with their popular family-car ranges. This is the laptop that serves primarily as the main household computer for Web browsing, games, running one’s “startup” small business and other activities.

As well, the NFC sensor could be duplicated on the back of the computer to cater for Sony’s NFC Easy Connect equipment-pairing ability. 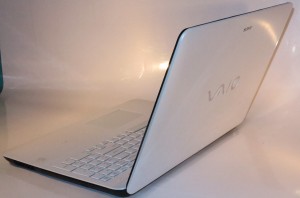 would position the Sony VAIO Fit 15e series of laptops as an all-round mainstream “dining-table” laptop for most households. Similarly it would work well as a small-business work-home laptop or as something that suits travellers who work from a particular location at their destination such as their friend’s house, a hotel room or ship’s cabin.

Here, Sony’s multimedia prowess would come in to its own when you want to dabble with photos, movies or music on the road.. The only sore point here may be the price being offered for this model but it is worth looking for the good deals on this unit.