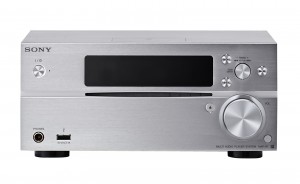 Sony had launched some newer hi-fi components in to the European market including the STR-DN1050 and STR-DN850 surround-sound receivers and the BDP-S7200 optical disc player which can play SACDs or Blu-Ray Discs. All of these can be part of the home network by implementing at least DLNA functionality and access to varying online-content services with the receivers even supporting Bluetooth and AirPlay functionality.

But what drew my attention to this playlist was Sony climbing on to the high-quality network-enabled CD-receiver bandwagon by offering the MAP-S1 CD receiver. These are systems that have a CD player, broadcast-radio reception, amplifier functionality and, now. access to network-hosted and online content like Internet radio but are optimised for high-quality sound. They take on the spirit of the late-1970s music centre or cassette receiver (casseiver) where a very good unit of this class could offer what a baseline component-based hi-fi system of the time offered in both sound quality and functionality.

Previously, I had given a fair bit of space to the network-enabled CD receiver, including my review of the Rotel RCX-1500 as well as a fair bit of commentary about this product type in my coverage of the Australian Audio And AV Show 2013. This is due to the “lifestyle audio” product class becoming more relevant as the small elegantly-furnished apartment becomes more relevant especially for those of us whose children have flown the family nest.

This product is different from their CMT-series micros systems due to the idea of users being optimised for high sound quality. One of the factures was that a user could supply their own speakers for this system or they could purchase a pair of Sony high-grade bookshelf speakers and use them, very much like Onkyo’s FR-435 CD/MiniDisc “music-centre” system.

The Sony MAP-S1 offers the network connectivity for DLNA, AirPlay and access to online music services like Spotify and Internet radio, and also offers the ability to work with Bluetooth smartphones using the NFC pair / connect functionality and the aptX codec. As well you can have it become a USB DAC/amplifier for a computer thus exploiting the high-resolution audio content available for download if you host that on a Windows or Mac regular computer.

One question that can be raised with this class of network-capable AV equipment is whether the equipment will support dual-band wireless networks whether using 802.11n or 802.11ac technology. Similarly, there will also be the issue of network and online functions not being available with developments that offer “headline” Wi-Fi Internet that implements Web-based login. In these situations, the Sony MAP-S1’s Bluetooth and USB Audio functions would come in to their own when it is used with a regular computer or mobile device to “pull in” online music services including Internet radio.

As more of these network-capable CD receivers come on the market and yield the high-quality sound, especially from mainstream as well as boutique AV-equipment manufacturers, a compact hi-fi system for that apartment or house could be about buying one of the CD receivers and buying or resurrecting from the garage a pair of good hi-fi speakers.