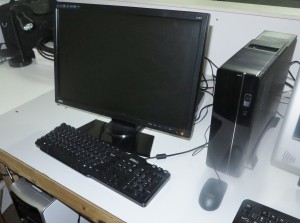 As I had mentioned in a previous article, I had moved to a new church congregation and, a few services later, my new pastor had approached me for advice about specifying a new computer for the church. This was because the then-existing computer that was being used to show the song lyrics during worship and to sometimes show video material during a service or similar church event was nearly on its way out.

A risk I often identify with non-profit organisations of any size is where they could end up buying capital equipment that is undersized for their needs or is very likely to fail too frequently. They are also likely to fall for purchasing mistakes where they buy from a vendor who offers the goods for cheap but doesn’t offer good-quality after-sales service and support. In a lot of cases, these organisations are likely to source goods from a “friend of a friend” or “my friend’s boss” where they are not likely to get the best deal and this can place a toll on friendships and relationships.

I identified that this computer is to be used for AV playout during services and other church activities. One activity that this church also engaged in very regularly is a concert outreach with band members playing the appropriate Christian songs as part of this concert. In these concerts, it would earn its keep with playing out video material or backing tracks for the performances.

These requirements placed an emphasis on multimedia work thus requiring a computer that can handle this kind of work very smoothly. As well, we were moving towards a newer media-playout practice which is to handle file-based media that is provided on a “transfer now, play later” method. This means that the pastor or one of the church elders can receive the media via an Internet path or create the media themselves at home and transfer it to a USB stick to take to church. Then they copy it to the computer’s hard disk for playback and work from the file that is on the hard disk when the time comes to play the material.

The existing system was an orthodox “tower-style” white-box desktop computer that was running Windows XP but was underperforming for today’s requirements due to small RAM and hard-disk space. This is connected to a local screen at the sound desk for cue/monitor purposes as well as a “front-of-house” video projector for the congregation to see the material.

For that matter, a “white-box” computer is a computer, typically a desktop computer, that is built by a value-added reseller or independent computer store using components that the reseller purchases. This can be a custom-built system or a package that is available “off-the-rack” for a known price like this computer.. It was infact the way most small businesses and home users bought their personal desktop computers since the 1990s.

What can benefit this application

For this application, I have identified certain key features that are important. These are increased processor capability and speed along with a dedicated graphics subsystem so as to allow the system to work with the local monitor and the projector in a highly responsive way.

As well, I placed importance on a computer having as much RAM and hard-disk capacity as the church can afford with the minimum being 4Gb RAM and 750Gb to 1 Terabyte hard disk capacity. One of the computer dealer also recommended in to their quote the use of a solid-state drive which can give the computer some speed especially when loading the software such as during startup.

I made sure that the computer came with a legitimately-licensed copy of Windows 7 so that most of those in the AV ministry don’t need to learn new skills if Windows 8.1 was in place. This was assuming that most of the people were operating computers running Windows 7 on their home network or at work.

Before any money changed hands, I made sure that the church obtained quotes from a few different vendors. This has an advantage of knowing how much a computer system of this standard was to cost and it also allowed for the pastor to use these quotes as a bargaining tool to get the best value for money.

I made sure that the vendors we had on our shortlist had a local “bricks-and-mortar” storefront because of the issue of service and support. Here, we would be able to talk with the vendor rather than an offshore call centre if the machine did break down. It also allows one of the church elders to put the computer in their car and take it to the store if it needed repairs.

The kind of vendors we went for were national computer-store chains or independent computer stores who were able to build a system to the specifications or have one that was already built. For that matter,smaller independent or local computer vendors are likely to supply a “shop-built” white-box system for better value with local support.

The new system in place

We purchased a small “white-box” system to the specification, installed the necessary software on to it such as EasiSlides and set it up for use in the church. As I was worshipping God through the first Sunday morning service after the computer was installed, I had noticed that there was very little “lag” with the song-lyrics display.

There were still a few issues with the operators getting used to Windows 7 on the new computer after being used to handling Windows XP on the previous computer which I found out after that service and is something that I notice when one is confronted with new equipment.

As I had mentioned in my previous article about purchasing technology for a small business or community organisation, it is important to spend some time “doing your homework” when purchasing the technology. This is to make sure you are buying the equipment that represents the best value for money and can serve you in the long run.

In this case, it involved defining a set of baseline specifications that you won’t go below along with a price range that suits your budget, then seeking different quotes on systems that meet the baseline specifications from a few different vendors for the best price within your range before buying the actual equipment. As well, placing importance on vendors with a local physical shopfront allows for one to be able to obtain prompt service and support if the equipment malfunctions.