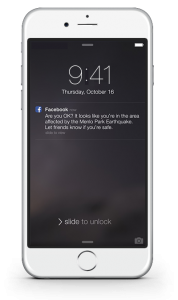 Facebook has just released a system which works during natural disasters or other civil emergencies to allow people to be sure that those friends of theirs who are in the affected areas are OK. This system, known as Safety Check, was born out of a “notice board that Facebook built in to their system during the 2011 Japanese earthquake and tsunami. It would still complement other methods like phoning or texting those you know in the affected areas.

If an emergency happens, this would affect a known geographical area and Facebook would determine if you or your friends are in that area or not. Typically, this would be brought on by emergency services and the media advising Facebook of these situations. This would be based on the City data in your Profile or rough-gauging where you are interacting with it from. It would also use the Last Location details if you opt in to and implement the “Nearby Friends” app as another metric. 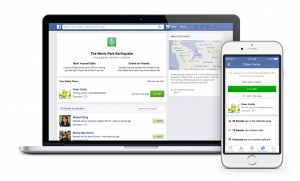 Here, you will have a notification that will pop up if you are in the affected area and you mark this as “I’m Safe” if you are OK and safe, or mark as being “Out Of Area” if Facebook miscalculates your location and determines that you are in that area when you are are not in that area. The latter situation can happen for people who are in a large metropolitan area or conurbation and the disaster or crisis situation only affects a small part of that area.

This status will show up to your Friends as a Notification and in their News Feed to reassure them.This is augmented by a special “dashboard” page created for the emergency that shows a filtered list of your friends who are in the area affected by the crisis so you cab know who has “called in” to say they are OK,

This same setup also benefits those of us who are outside the affected areas and want to simply be sure that none of our friends have been affected by that crisis. Here, we receive the News Feeds and Notifications about our Friends who have “checked in” as being safe or out of the affected area and can also see this on that same “dashboard” page.

As for the privacy issue, these updates are only visible to those people who are currently your Facebook Friends when it comes to “coarse” coverage and to those of us who have reciprocally enabled the “Nearby Friends” functionality on Facebook for each other.

Although Facebook is the dominant consumer-facing social network and is able to achieve this goal, various other messaging and social-network services could learn form this setup to allow “at-a-glance” notification of our loved ones’ welfare during natural disasters and other crises.

Are Siri and Alexa being seen as personal companions?

Google and Facebook are starting to bring accountability to political advertising