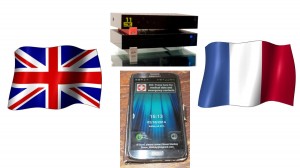 France and the UK have recently become hotbeds for Internet-service competition whether at a pure-play (single-service) level or with packages that integrate landline telephony, fixed broadband Internet and / or multichannel pay TV. Those companies typically are offering this service via a “single-pipe” setup with some of them reselling content and services from competitors who offer it on a wholesale basis if they can’t sell it directly.

This has been due to government telecommunications and competitive-trade authorities enforcing real competition through measures like stopping incumbent operators from selling wholesale service to competitors under unfair terms compared to their retail offerings. As well, in France, it took Free to offer broadband and triple-play packages with increased value at ridiculously-low prices to effectively “shake up” the market and start this level of competition.

Now this is being expanded towards “four-play” or “quadruple-play” services that include mobile telecommunications along with the fixed telephony, “hot and cold running Internet” and pay TV. This is facilitated typically through their own mobile networks or buying mobile telecommunications from an established. typically pure-play, mobile operator on a wholesale basis as a “mobile virtual network”. Some companies may call the mobile broadband service as a distinct service and describe the packages that include this service as “five-play” or “quintuple-play” packages.

Over previous years, France has established an example of a healthy competitive market for this level of telecommunications and entertainment service. This is with all their telcos and broadband operators offering the “boxes” which integrated telephony, broadband and pay TV at some very keen prices, something I have covered regularly on HomeNetworking01.info. But most of these providers either have their own mobile infrastructure over the country or are putting themselves in a position to set up mobile virtual networks that they resell with their packages. An example of this is Free selling mobile telephony to their customers for an extra cost that is effectively “pennies’ worth”.

The way this level of service has come about for a lot of the UK operators is through varying levels of consolidation and business partnerships. A lot of these consolidations and partnerships have been with the companies who offer one or more services that can complement their own service packages to construct the “quad-play” package. But one of the situations that this has led to is for BT who sold off their Cellnet mobile-telephony service to O2 which is part of Spain’s Telefonica company in the 1990s, wanting to buy back the mobile network from this telco to run as the “mobile arm” of their quad-play package.

The directions that this could lead to include the availability of private femtocells that provide local mobile-phone coverage for the customer with the broadband connection serving as a backhaul or “cellular over Wi-Fi” for voice calls on one’s smartphone; TV Everywhere which is about access to the pay-TV packages anywhere in the country with your laptop or mobile device; and integrated landline / mobile telephony setups i.e. to receive calls destined to your landline on your mobile phone for no extra cost or call from home using your mobile phone at home-phone tariffs. As well, multiple-mobile-device Internet service could become very much part of the packages which can cater to those of us who maintain more than one mobile-broadband device like a “Mi-Fi” device.

Even integration of “over-the-top” telephony services like Skype and Viber could become the norm for these service providers by allowing customers to make or take calls through these services via either the mobile or the landline phone for nothing.

Other countries like the USA, Germany or Australia could be highly aware of this level of competition and know how to be prepared when it hits their shores or to know how to encourage it in a viable and sustainable manner.

First device to use Wi-Fi technology for host-peripheral connection

Four more US cities to benefit from Google Fiber competition