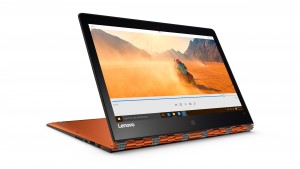 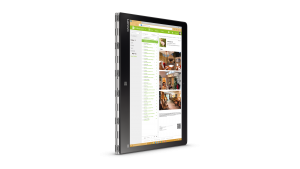 Lenovo Yoga 900 as a tablet

The premium end of the laptop market is starting to see some very strong competition with Lenovo trying to answer Microsoft with their Yoga 900 premium convertible laptop,

The Lenovo Yoga 900 was initially to be an update and refresh for the previously-reviewed Yoga 3 Pro, courtesy of Windows 10 and Intel Skylake horsepower. But with Microsoft blindsiding everyone else in the “open-frame” computer market with their Surface Book which is both a convertible and detachable, the computer press have seen it as close competition.

The newly-refined watchband hinge on the Lenovo Yoga 900

The Lenovo Yoga 900 has provided some aesthetic and build improvements over the Yoga 3 Pro such as a slimmer chassis with the computer being rated as being the slimmest 13” convertible to date. The watch-band hinge has been refined in order to provide for a smooth switch between laptop and tablet operating modes. Even a six-row keyboard allows quick access to adjustments like brightness or flight mode courtesy of a single button push. Of course, this convertible notebook will exploit Windows 10’s Continuum feature right out of the box, automatically switching the display between Desktop Mode with the Start Menu and the touch-friendly Tablet mode when you fold it over and back.

What ZDNet and others were saying was that the baseline for the Yoga 900 (i5 processor, 8Gb RAM, 256Gb solid state storage) has an ask for US$1199 while the top shelf model (i7 processor, 16Gb RAM, 512Gb solid-state storage) could be bought fur US$1499. This is with the Surface Book costing around US$1000 more for similar specifications.

Let’s not forget that Lenovo added the “champagne gold” finish to the list of finishes that the Yoga 900 can came in, as well as the silver finish and the orange finish that was common with the Yoga 3 Pro. The “champagne gold” look will have some of us think of that similar finish appearing on some premium consumer electronics especially Marantz hi-fi equipment.

As with VAIO coming back to the fore and Microsoft releasing their Surface Book, the Lenovo Yoga 900 indicates that there is still interest in premium-grade ultraportable computers as a distinct market segment. This is in a similar way to how vehicle builders developed the “personal luxury car” product segment which was based around vehicles, especially 2-door coupes, which were designed with a focus on luxury and style where you arrived at the destination “ready to impress”.

Who knows what the other computer manufacturers will come up with to satisfy this product, especially when the idea is to compete against Apple.

Coming soon to your TV: The Microsoft Surface Book commercial