I am reviewing the Lenovo Yoga 3 Pro which is Lenovo’s latest premium iteration of the Yoga Pro family of 360-degree “fold-over” convertible notebooks, one of which I have reviewed before as the Lenovo Yoga 2 Pro. This still has the ability to work as a tablet or a laptop simply by you folding it over like a book or hinge.

Through the review, I had a good chance to write up the Consumer Electronics Show 2015 series of articles (1, 2, 3, 4) using this laptop and found it a good chance to test it as an on-road notebook especially with creating copy when out and about. 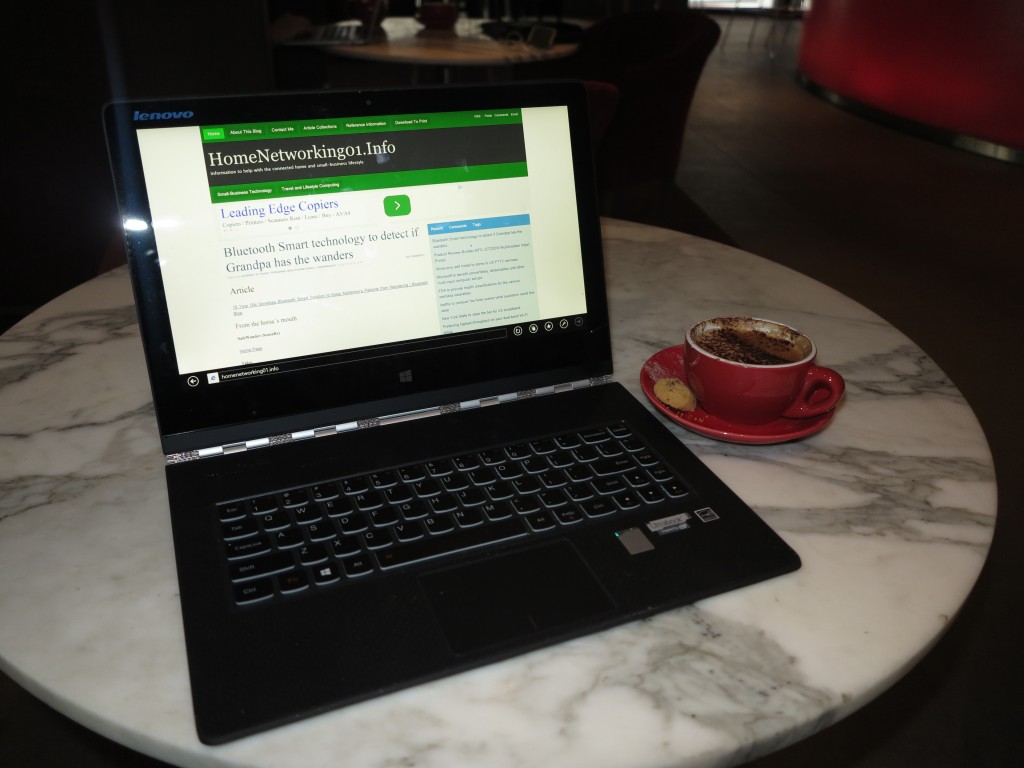 One fieature that I would describe as the equivalent of the “pop up headlights” on a sports car is the watchband hinge. This works also as an effective heatsink which dissipates the heat that builds up at the top of the keyboard when the system is used. But it doesn’t compromise on how easy it is to switch between a tablet and a laptop. 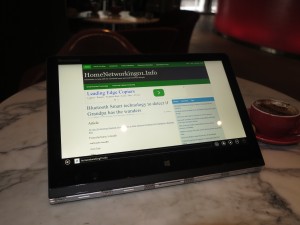 There is a distinctly tactile rubber surround around the keyboard that, at times could be a dirt trap. Otherwise it is a system that is easy to keep clean especially if your second office is your favourite café or bar.

The keyboard is roomy enough for touch-typing like most 13” notebooks,but Lenovo needs to make the home keys easier to feel There is the proper tactile feedback while typing which allows you to type quickly and is even accurate even when I used the Yoga 3 Pro on my lap to type up some copy. It is also easy to clear dirt from around the keys which is something you would have to do if you have been munching on some food while typing up something on the Yoga at that “second office”. 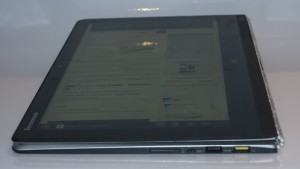 The touchscreen is responsive as expected but a few bugs with some Windows 7 software doesn’t make it behave with proper cursor location when using these programs.

There is the sharpness that is part of the high-resolution display but a lot of Windows software doesn’t exploit this capability properly. But it still works properly with most video content in that there isn’t any change with colour balance or saturation. As well, the display shows the images very smoothly which can come across for multimedia and games.

Like a lot of notebook computers of its class, the sound quality will be compromised by the speakers integrated in the Lenovo Yoga 3 Pro. But it was able to come across properly with the sound that is expected for computers for its class. 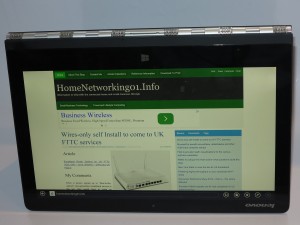 There is a 256Gb solid-state storage device serving as the main secondary storage and the capacity is enough to allow you to have plenty of work on board when you are on the road. This is augmented by 3 USB 3.0 ports and an SD memory card drive with the USB ports being able to support

One of the USB 3.0 ports on the left side and is highlighted in yellow serves as a power input port for the supplied charger. This predates the USB Power Delivery specification which is being purposed for powering small “secondary-use” laptops but the setup used with the Yoga 3 Pro wouldn’t be compatible with newer equipment.

There is also an 3.5mm audio input / output jack as well as a mini HDMI port for connecting to external displays.

The Lenovo Yoga 3 Pro has Wi-Fi that supports 802.11ac dual-stream but I don’t have access to a network that proves this new functionality. What I like of this is that it is ready for home networks that are tooled up with this new Wi-Fi technology. If you have to use it with Ethernet or HomePlug, you would need to purchase a USB-Ethernet adaptor, preferably a USB 3.0-Gigabit Ethernet adaptor or an expansion module (dock) that has this functionality.

For day-to-day regular use, the Lenovo Yoga 3 Pro was able to run for a long time without needing to be charged. This may be a point of confusion for those of us who are used to charging notebook computers overnight and starting off with a full battery at the beginning of the day. But you can get away with running it one or two days of regular Web-browsing, email and typing-up without worrying about whether you have taken the charger with you.

I have noticed that the Lenovo Yoga 3 Pro’s convertible design and touchscreen user interface still impresses most people especially when they haven’t been exposed to this concept with laptop computers that are in circulation. One of the men in the church I go to was impressed by the “watch-band” hinge that this computer has, more as a sign of luxury and quality.

For a time, convertible notebooks of the Lenovo Yoga 3 Pro’s league will remind me of a situation with a man that I once knew through the 1980s who worked in a car showroom that sold Japanese cars as part of its stock. This is where the high-end sports cars that had the features that awed and impressed people, but these were out of the range of most peoples’ budgets.

The Lenovo Yoga 3 Pro is expensive if Lenovo is to target it as a successor to the Yoga 2 Pro, but is the right price if they are to pitch it as the ultra-premium convertible laptop. They could keep this model as the lead model of a group of convertible notebooks.

Personally, I would like to see Lenovo use the Yoga 3 Pro as a leading model for a range of 11” and 13” “360-degree” convertibles pitched at either home users or business users. Here, some of the models can be positioned at prices that most of us can afford, but are still preserved as a secondary personal-computing device. This is because there is an interest in the idea of the convertible or detachable “2-in-1” laptop computer being considered as an alternative to the tablet or a secondary laptop.

I would position the Lenovo Yoga 3 Pro as an option for a premium easy-to-use multifunction notebook that can serve well for those of us who do a lot of travelling on public transport. It is more so if you also appreciate the idea of a tablet being 13” which may appeal if you are showing something to two or more people.