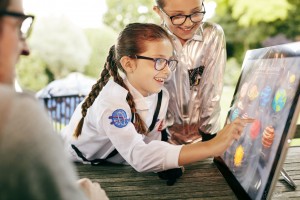 Hands on with the Lenovo Yoga 900 Home | SuperSite For Windows

When Windows 8.0 came on the scene, some computer manufacturers led by Sony brought forward the “Adaptive All-In-One” form-factor for personal computers. 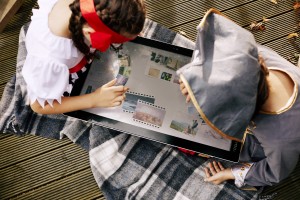 What is this form factor? It is a tablet with a screen size of between 19” and 27”, typically 21”  and can either work as an “all-in-one” desktop computer or a large tablet suitable for group-based computing activities. As well, these computers were primarily a “transportable” class of computer with integrated batteries that had a runtime of under 6 hours along with them being larger and heavier than the typical laptop computer. This means that you could take them from room to room or be able to stow them away quickly and easily in the same vein as a boom-box, portable TV set or small sewing machine. The premier example of this was the Sony VAIO Tap 20 which sits on a kickstand and links with a wireless keyboard and mouse for desktop use or lays down as a tablet. 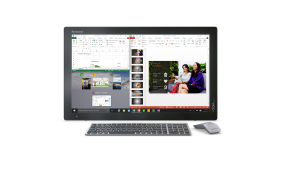 There was some coverage about these computers being so-called “lifestyle” computers – devices that blend in to one’s personal and household lifestyle. The best example that comes to my mind was an account written by a Microsoft blogger who brought the Sony VAIO Tap 20 to her parents’ home which was effectively the “family house” for her family.

But things tended to slow down as far as this product class was concerned because of varying factors such as the low-cost mobile-platform tablets and cloud computing being considered more relevant for personal computing.

With Windows 10 and Intel Skylake silicon being launched over the last few months, the traditional “regular” personal computer has had a “shot in the arm”. These systems have been pitched as being complementary to mobile-platform devices rather than competing with them. As well, companies who worked on the “open-frame” computing environment where there systems ran Windows, ChromeOS, Linux or Android were pulling out all the stops to have systems, especially those in the premium class, that performed and looked as good, if not better, than Apple’s systems.

This has caused Lenovo to front up with an Adaptive All In One computer in the form of the Yoga Home 900/ This 27” system runs Windows 10 which has the Continuum feature that adapts the display for both tablet and desktop use. Lenovo even uses the “Aura” touch interface to make it work well for group computing. They also run an app store which specialises in games and apps that are for this class of computer, including board games, air hockey, photo-sharing apps and the like.

As well, the Lenovo Yoga Home 900 uses Full HD display resolution, Intel 5th-generation horsepower and has an option for discrete (should you say gaming quality) graphics. With air hockey and board games aside, there needs to be a way to convince most of us to consider a computer from the “Adaptive All-In-One” class as a viable personal-computing option.