This is where it is a 14” notebook computer that offers what is expected of a 15” mainstream laptop computer with such features as a large hard disk, a DVD burner, plenty of connectivity amingst other things.

Some of you guys may be shocked at my reviewing a pink-coloured laptop but it is available in a white or black colour as well as this pink colour. As I had mentioned with the Toshiba Satellite L730 that I previously reviewed, the white colour may also appeal to those of you who customise a portable computer by applying lots of decals on it.

For those of you who are interested, this notebook is the first one that has passed HomeNetworking01,info to be equipped with the Intel Ivy Bridge processor chipset which has quite a few benefits like improved integrated graphics abilities and integrated USB 3.0 support. 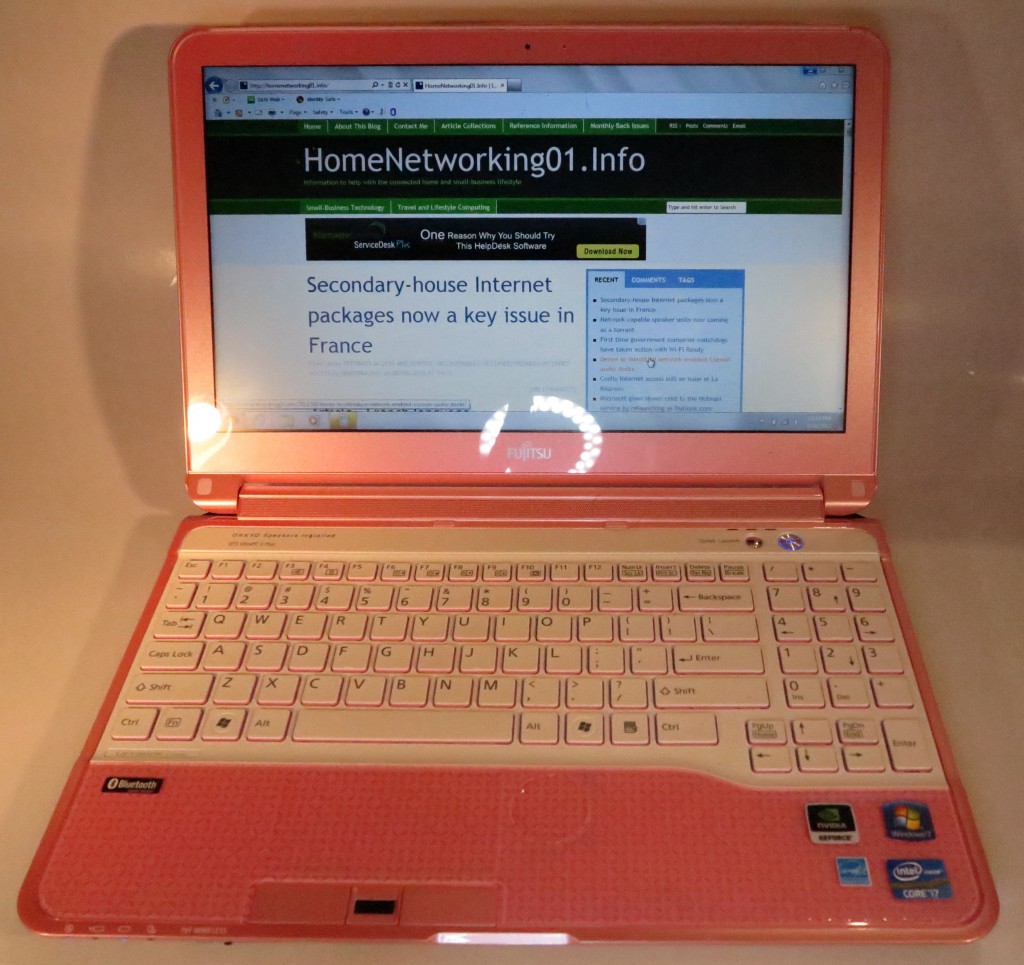 This pink-coloured iteration of the Fujitsu LifeBook LH772 is finished in something that makes you think of neapolitan ice-cream where there is the pink body and the white keyboard.

It is a well-built computer with felt panelling underneath. This would make it less likely to slip on most furniture and make it more acceptable on that good French-polished dining table.

As well, through the times I have used this Fujitsu laptop, I have noticed no overheating even though there is a vent on the left hand side of this notebook. 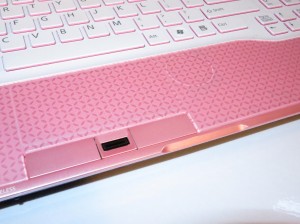 The keyboard has that hard feel about it but you can still touch-type easily on it. There is also a full numeric keypad which would come in very handy for accounting and similar applications.

This has yielded a smooth visual experience with on-demand video as well as regular computer use. One letdown with the display is the use of a glossy screen, which can be limiting if you have to dim the display to conserve battery life or have to deal with difficult lighting.

The Realtek sound subsystem had yielded the same “punch” when I watched a drama via video-on-demand and listened with headphones. The Internal speakers sound very similar to a  typical large portable radio or speaker dock especially when they play music. Of course, gaining a sound that has life in it from a laptop’s integrated speakers will be a difficult exercise due to the way these machines are designed.

The Fujitsu Lifebook LH772 has all the expected connections for a “bridge” notebook with VGA and HDMI video output, 3.5m audio input and output jacks, a Gigabit Ethernet jack and, best of all, 4 USB 3.0 ports. This makes me think that this notebook is future-ready as we connect more devices like 4G USB dongles and external hard disks to these computers.

The Wi-Fi wireless ticked the boxes as far as connectivity is concerned and there is a proper slide switch to enable and disable it for when you are flying. The Bluetooth subsystem is compliant to the 4.0 specification which allows it to work with sensor and controller that are required to work on a “watch” battery or 2 AA batteries for a long tine. This would work well for someone like a repairman who is using a Bluetooth 4.0 Smart thermometer to log the temperature of a fridge or air-conditioned space to check for efficiency or the behaviour of the thermostat.

The review sample came with a 750Gb hard disk and a DVD burner which would make it suitable as a main or sole computer for most people, rather than a secondary computer. As well, there is an SDXC card reader for downloading pictures from that digital camera.

The battery can last the day with regular use including hotspot-surfing . 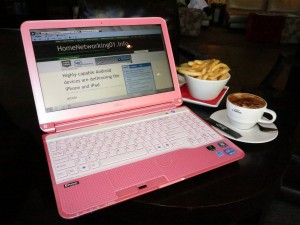 It was able to play a DVD continuously for 4 hours, 15 minutes with the Wi-Fi and Bluetooth wireless subsystems running. It would be considered average for laptops that implement the dual-mode graphics technology and fall back to the newer Sandy Bridge or Ivy Bridge integrated-graphics technology while on battery power.

One key limitation that may come about here is the price and availability of this series. I would like to see  some lower-price and mid-price configurations with the i5 processors and lesser hard disk, but available with all the different colours. Similarly, Fujitsu could also run with a fourth colour like a blue or bronze colour if someone wanted that “manly-looking” colour.

This Fujitsu LifeBook LH772 series has become, in my honest opinion, a viable 14” bridge notebook option that could be targeted at people who work from home and like the idea of a portable computer that can connect to an external display or many other applications where this class would appeal. 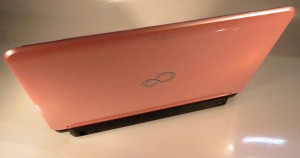 The third-generation Intel chipset and the NVIDIA discrete graphics with Optimus mode shift can allow this computer toe work well with most games, video playback and most image-manipulation tasks. It is also a representation of a laptop that is brought to the latest hardware standards like USB 3.0 and Bluetooth 4.0 Smart Ready and can take advantage of these when the time comes.