I am reviewing the Boston Acoustics MC-200 Air wireless speaker system which uses a home network to work as a speaker with Apple AirPlay or DLNA playback setups. This is in a similar vein to the previously-reviewed Sony SA-NS410 and SA-NS-510 speakers which were optimised to work with smartphones and tablet computers in this context.

But unlike the Sony speakers and the similar ones offered by Pionner, this unit does just work as an AirPlay/DLNA network speaker without the integrated Internet-radio functionality or “Party Streaming” functionality. It also simply runs on AC power unlike some of the speakers of this class which work on integrated rechargeable batteries. Here, the design is focused on sound quality in a similar vein to the likes of the Bose SoundDock 10 speaker dock which are designed by companies who have strong hi-fi speaker design heritage. 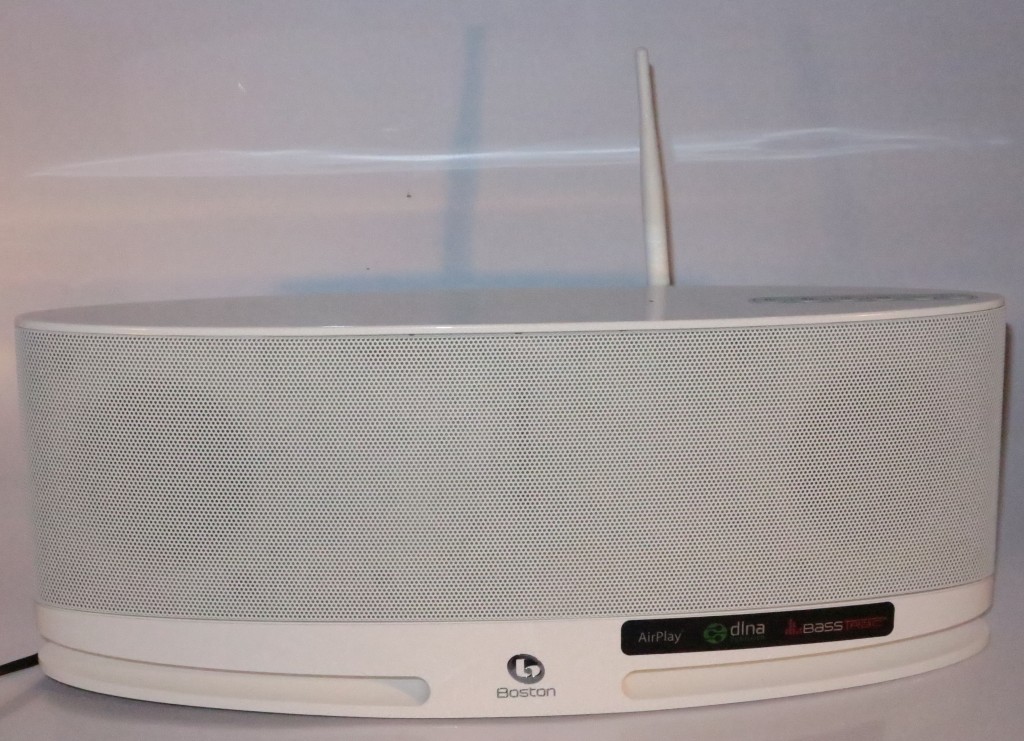 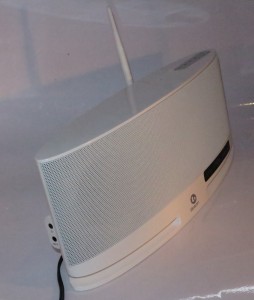 Left hand side view – headphone and AUX IN sockets

You can set the Boston Acoustics MC-200 Air speaker easily with Wi-Fi wireless network segments that implement WPS push-button setup, whereupon you press the SETUP button on the back of ths unit before pressing your wireless router’s or access point’s WPS button. But if you set this unit up with Wi-Fi segments that don’t have this setup routine and are part of a regular small network, you have to hold down the SETUP button for a few seconds to make the device be its own access point and Web server. Then you have to work through a Webpage presented by this device to supply the SSID and WEP or WPA security key details.

Like all these kind of network-enabled consumer-electronics devices, this unit wouldn’t be able to work with “enterprise-type” networks which require user-specific or device-specific details to log in. Nor would it work with wireless hotspots that implement Web-based login.

As a network device, this unit worked well on the Wi-Fi wireless network even in parts of the house where some other devices struggle to associate. This is due to the use of a “whip” aerial rather than one totally integrated in to the wireless speaker which is common with other wireless speakers. It also streams the content properly and smoothly with stuttering or buffering.

The Boston Acosustics MC-200 Air wireless speaker works properly as a DLNA-capable network media renderer device with Twonky Mobile on my Android phone and with Windows Media Player on my Windows 8 PC. In this situation, you have to press the AIR button until it glows blue. When this button is glowing green, this device is responsinve to iTunes or Apple iOS devices.

There is also a USB connection so you can play Apple iPods, iPhones or iPads that are connected via a USB data cable through the speaker. This would be totally relevant with newer iOS devices that use the new “Lightning” connection. It also comes with a 3.5mm stereo line-input jack so you connect laptop computers, Discmans, and other audio equipment to this speaker.

It also comes with a small infra-red remote control which duplicates the function of the buttons on the top of the wireless speaker. This includes being able to start and stop the music for AirPlay, DLNA and USB playback scenarios as well as quickly adjusting the volume or muting the sound for all sources.

The music comes out of the Boston Acoustics MC-200 Air wireless speaker very clearly without sounding tinny or voice-dominant. The bass response is still there, giving the music that extra bit of “kick” without sounding too boomy.

I was able to take the MC-200 Air effectively just shy of full volume before it started to clip and sound awful. It can play comfortably loud to fill a small room like a bedroom.

One feature that could be nice to have would be a USB Type B socket and USB Audio Device support for connection to host computers. This would come in to its own with laptops, Ultrabooks and similar computers that don’t have good speakers due to their small size.

Similarly, it should be feasible to set up the Boston Acoustics MC-200 Air as its own access point, with or without DHCP server functionality so you can run it as its own network. This is important if you want to use it wirelessly with a smartphone, tablet or laptop in an environment where their isn’t a small network that you can have it part of.

Similarly, this system could offer Internet-radio functionality to compete with Pioneer and Sony speakers but this feature may not be necessary. It would also need Boston Acoustics to create a fully-fledged remote control app for the smartphone and tablet platforms.

I would recommend the Boston Acoustics MC-200 Air wireless speaker for use as a basic high-quality network speaker for a small network if you are using an AirPlay or DLNA setup. It can also serve those people who also use an Apple iOS device and need to use it at the end of a USB data cord.