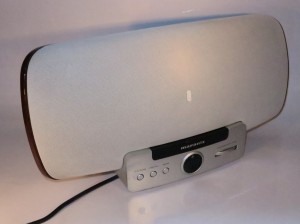 An increasing number of consumer-electronics and small-business devices that don’t have a large screen are repurposing their integrated Wi-Fi functionality as an access point as part of the setup routine. This is used alongside an integrated Web server and is mainly for when the devices are being integrated with a Wi-Fi network that doesn’t implement WPS one-touch setup.

But a lot of these devices also implement an Ethernet wired-network connection for use when there isn’t reliable Wi-Fi wireless-network connectivity. This function is used primarily as a product differentiator for the consumer printers but is common on a lot of “big-set” consumer AV equipment. This concept can be taken further in one of a few ways in order so that the Wi-Fi wireless network ability in these devices doesn’t go to waste, especially when the device is connected to a wired (Ethernet or HomePlug AV powerline) network segment.

One of these devices, typically a wireless speaker or printer, could implement a logical network that just serves the access point and run its own DHCP server. This could come in to its own where you just want the device to provide its function to portable devices in a walk-up manner but you don’t want the portable devices wandering on to the Ethernet-connected network or Internet service.

This may be a situation with a wireless speaker or a network printer where you want to allow the device to gain access to Internet and network resources or allow other network devices to have access to the device. But you don’t want people who use the device in a “walk-up” manner with unauthorised devices to maraud around the network or use the Internet bandwidth, which is something of concern with business users with larger networks.

Some of the wireless speakers like what Pioneer offers follow this pattern by working as their own networks so as to create an ad-hoc setup to get the tunes going in environments where a small Wi-Fi network segment isn’t in service. Pioneer achieves this through a switch on the back of the speaker which enables this mode specifically rather than for setup and this method could be exploited by other device manufacturers through a “permanent setup mode” where the speaker doesn’t stay in the setup mode if it succeeds in connecting to a wireless network.

On the other hand, you could have the Wi-Fi functionality that is normally dormant when the device is connected to the wired network, become a simple access point. Here, this setup could come in to its own if the device is being used in an area where Wi-Fi wireless reception for your network is very difficult.

This kind of setup could be simplified with a WPS-based “Wi-Fi Clone” function so you could switch to the access-point mode even if the device worked initially with the Wi-Fi segment. On the other hand, a device like a business-grade network printer could implement WPA2-Enterprise access point functionality in order to work with business-grade wireless networks.

As well, this functionality could be simplified by the device detecting the connection to an Ethernet network and asking the user if they want to operate it as an access point if the device was previously connected to a wireless network.

In a similar context, the Wi-Fi and Ethernet network interfaces that these devices have could permit the device to become a wireless client bridge for an Ethernet-based device or segment. This would be of an advantage if the device is picking up a reliable strong signal from your Wi-FI network.

The classic use of this would be to provide network connectivity to a games console or Blu-Ray player from a Wi-Fi-enabled smart TV working with an existing Wi-Fi wireless network. Similarly a desktop computer in a remote room could work with the integrated Wi-Fi ability in a network printer for its network connectivity.

The setup experience could be set up with the use of WPS-assisted “setup copy” routines and vacant-channel-seek routines for network integration. For “standalone segment” setups, the device could implement setup routines that are similar to carrier-provided wireless routers like SSID / passphrase stickers or cards.

This can be augmented through the use of nVoy technology which is intended to make the configuration and operation of small networks simpler yet giving these networks the ability to be like a big network.

Business-grade setup could involve support for WPA2-Enterprise functionality and multiple-SSID / VLAN functionality that are part of larger networks. This would be more relevant for printers or other devices that small business could take advantage of. It can be assisted with a technology similar to the original Windows Connect Now USB technology where parameters are transferred between devices using a USB flash drive.

Similarly the above technology could work hand in glove with Wi-Fi Passpoint technology in order to support the simple-yet-secure hotspot login technology that the Wi-Fi Alliance have proposed. This can work through the devices linking back to access controllers that implement this technology.

Manufacturers could take the concept of the integrated access point that is part of their network-capable devices and make sure that they don’t go to waste when these devices are connected to a wired network. Similarly, they could make sure that the wired network functionality doesn’t go to waste if a wireless link is exploited for network connectivity.

Is this the new direction for Internet radios?

Pioneer joins the ranks of the slimline network-capable surround receivers