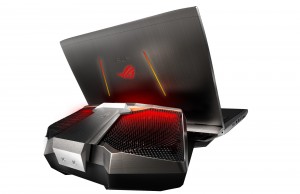 Most of the personal-computing industry are courting the core gamer as a highly-valuable market. These are typically young male but increasing female players who see computer gaming, especially games played on PCs (Windows-based regular computers), as a hobby and will focus a lot of disposable money towards building that dream performance-focused “gaming-rig” computer.

The personal-computing scene is focusing a lot of attention on this highly-valuable niche, typically by creating a range of computers, parts and accessories that appeal to this demographic. Initially this was looked after by businesses that exclusively court this demographic such as Razer but increasingly companies like Dell, ASUS and Acer are running their own brands or model names that are focused on gaming performance such as Alienware, Republic Of Gaming, and Predator. Lenovo has been the only company not to create a model name or brand for this demographic so for, typically using the Y name as the gaming-focused brand.

Most of these names reflect the traditionally-young-male gaming culture that is focused around playing MMORPGs, first-person shooters and similarly-aggressive games. It is being seen that this group of gamers have a large amount of disposable income to spend on their gaming hobby and is symptomatic of the way the marketing of goods and services is focused on the young.

A lot of these games are very dependent on instantaneous response and most of these computers and peripherals will be expected to yield performance that reduces unnecessary lag when playing these games.

But there is hope for some of these brands targeting female and mature-aged gamers who bite the bullet for engaging in computer games thanks to independent software developers and mobile platforms. It is because these user groups are using mobile platforms like tablets to play various casual games while independent game studios are answering the need to satisfy a market gap that is forgotten by the mainstream games studios and distributors.

AOC has now joined the party by creating the AGON brand which represents monitors and other accessories focused towards core gamers. The brand AGON represents AOC representing their leadership in monitors, Gaming that enhances the latest technology, Outstanding performance for that competitive edge and New standard of gaming. This bas been fulfilled with a range of QHD and 4K monitors that can easily complement that gaming rig with features like improved ergonomics for gameplay, a headset hook, highly-portable design; along with a remote control that makes it easier to switch between display modes for the games you play.

I do see this progressing onwards with every computer-hardware vendor running at least a product line focused on the gamer market with a lot of technical development taking place to squeeze as much performance out of these products. This could be where, for example, laptops, all-in-ones and low-profile desktop computers are equipped with support for external graphics modules or graphics-card cages thanks to the Thunderbolt-3 (USB-C) connection.

Similarly, Microsoft is progressing the idea of games developers being able to write a games title that can play properly on a Windows 10 regular computer or the XBox One gaming console thus allowing for games developers to cater to PC and console gamers at once.

It is showing that computer gaming isn’t just a casual pastime but becoming a serious hobby and the computing industry is having to cater for this.