Previously, I reviewed the Brother PDS-6000 sheet-fed document scanner which scans both sides of a document at once very quickly. This model connects directly to a host computer and would work with most document-management software. Now Brother have released the ADS-2800W which is a network-capable sheet-fed document scanner that allows you to direct a scanning job to a computer or a file server / NAS, and this is the machine that I am reviewing now.

There are some more expensive variants of this network document scanner that can scan at higher speeds but I am reviewing the entry-level model. 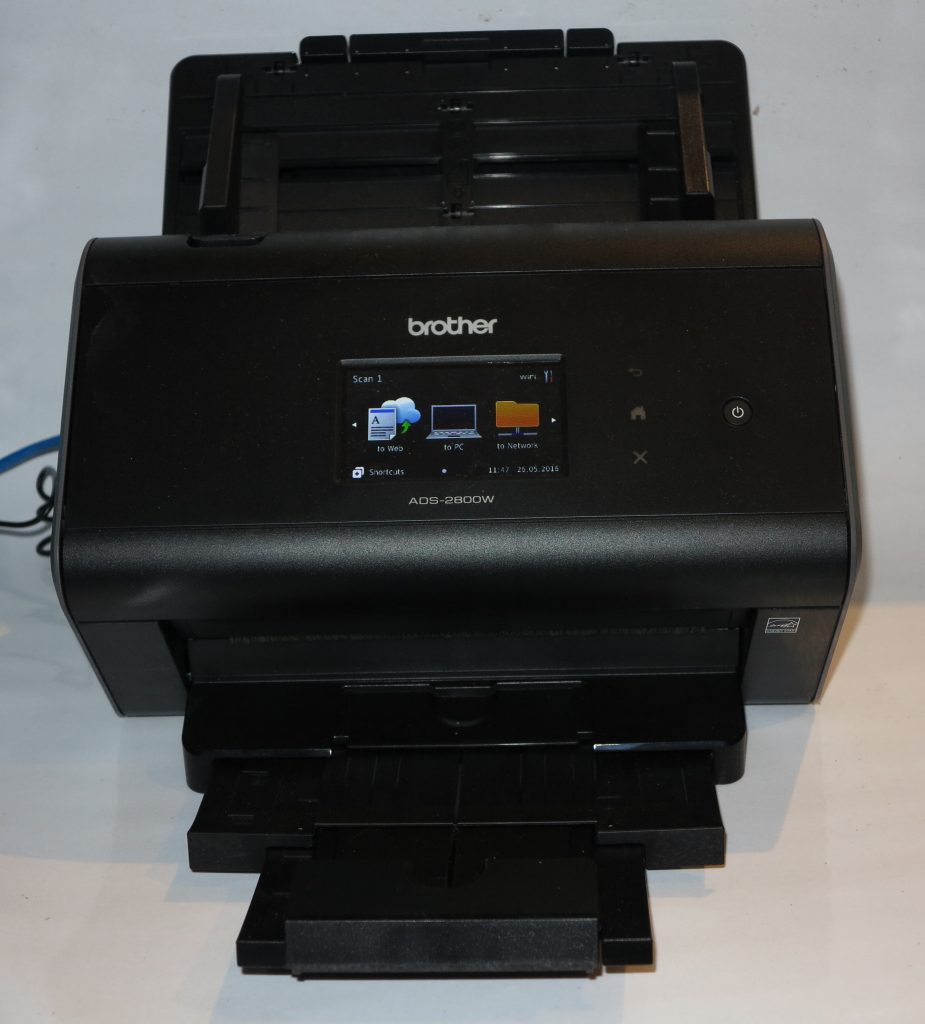 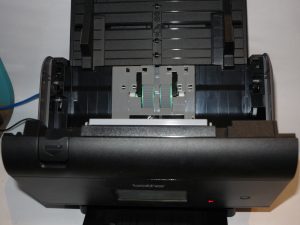 Single-pass document scan, easy to service if anything goes wrong

Brother have avoided the tendency to create a separate setup regime for the ADS-2800W network document scanner, which will be a bonus if you have stuck with this brand for your multifunction printer. Here, the software interface both at the scanner and at the computer are very similar and you can even use the ControlCenter 4 software to process your documents. 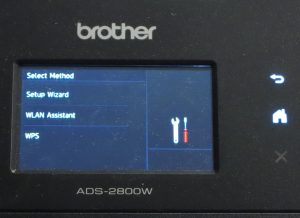 It was simple to connect this scanner to the home network although I used the Ethernet connection which is what I would prefer for normally-sessile devices. Here, it can be connected to a Wi-Fi wireless network segment or a wired Ethernet network segment (which also works with a HomePlug network segment) with the former network type working properly if nearer the wireless router. Personally, I would recommend that you use the wired network (Ethernet or HomePlug) at your home or office as I would recommend for sessile equipment. 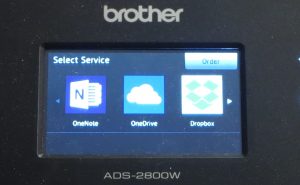 It scans directly to Dropbox

There is the ability to use a Web-based interface to set the Brother ADS-2800W network scanner to be able to scan to a computer, file server or NAS without the need to run a scan monitor on that computer. Here, the unit deposits the files to a known directory on the destination device in a predetermined form. As well, it can be set up to “scan and send” where it can send a document via SMTP-based email.

It also exploits the Brother Web Connect infrastructure to allow you to enrol it with Evernote, OneDrive, Dropbox, Facebook and other online services so you can use them as a destination for your scanned documents. You can also scan documents and images to your mobile device as long as you run the Brother iPrint&Scan mobile app, which is how I scanned some snapshots to be destined to Dropbox. An improvement I would like to have would be to see the scanned picture appear on the scanner’s screen so you can have the picture or document the correct way up.

The fact that this scanner makes use of Brother’s ControlCenter 4 software and uses the same scan monitor if you are running a Brother MFC alongside it means that you are not having to install extra software on your computer. When I ran the CD to install the drivers because I had issues with the Website, the installer detected the existence of the driver software associated with Brother printers and effectively updated the scan monitor to work with this scanner.

I even had the software set up so that blank pages were skipped even though the Brother scanner scanned both sides of the document when I was handling regular documents. This allowed for a single-side document to be worked on yet be ready to scan double-sided documents when dealing with “print-sign-scan-send” documents.

The Brother ADS-2800W network document scanner, like its stablemate the PDS-6000 implements a straight-through document feed which makes the scanning job quick but is kind to the documents because there is no curved path involved.

A job that I have been putting the Brother ADS-2800W network document scanner to over the past week is to scan a collection of snapshots due to the passing of someone whom I knew well. Here, I had set the Brother scanner to scan at the normal-for-35mm-snapshots “10x15cm” size with a resolution of 600dpi and fed the minilab prints in vertically. The document scanner had turned out the high-quality images while it was able to handle small batches of prints at a time like as though I was handling a multiple-page document. But I would like to see a “photo-optimised” scanning profile that copes with the glossy snapshots and works at a high resolution. As well, there could be the ability to determine whether a photo has a landscape or portrait orientation.

When I scanned a regular “print-sign-scan-send” document, the Brother ADS-2800W scanner made light work of this job and turned out the right number of pages based on what was marked. This avoided the creation of a 2-page PDF for a document that was written on one side only.

Limitations and points of improvement

A feature that would benefit the Brother sheet-fed document scanners, especially the network-capable units, would be to have functionality that gains the best out of photo scanning. This could be in the form of a “photo-optimised” high-resolution scan mode for scanning snapshots and / or a transparent-media scan mode with negative conversion for scanning film strips such as negatives.

I would recommend the Brother ADS-2800W network sheet-fed document scanner as a network-focused high-speed document-scanning solution especially if you want a high-speed dedicated-purpose scanner that can work independent of a regular computer.

For example, this could work well if you destine documents to the like of Evernote or Dropbox or to a NAS. Similarly, if you are wanting to get that hard copy document to be able to be viewed on something like an iPad, the Brother ADS-2800W and its peers can do the job properly.

But these devices would earn their keep if you scan many documents rather than the occasional few documents that have few pages and I would see it perform well with most businesses including tax agents who scan the receipts that are part of their clients’ “shoeboxes”.

Printing from your smartphone or tablet