Dropbox Now Has An Xbox One App | The Verge

Some of you may be exploiting Dropbox as a media pool for the various special occasions in your family’s or friends’ life. This is because of the ability to share photos at best quality with those you want to share them with, including the ability for you to have people contribute photos and videos to the same Dropbox folder you have for that purpose.

In HomeNetworking01.info, I had outlined how you can integrate your Dropbox media-pool folders with your DLNA-capable NAS and Smart TV by copying them a folder on that same NAS. The use cases I was calling out regarding Dropbox media-pool folders include special occasions such as weddings or major birthdays, the children growing up including pictures of the new baby, or memorialising a loved one who had passed away including choosing the pictures to show at their funeral.

The Dropbox app for XBox One 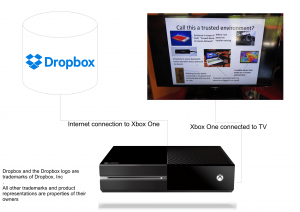 But you can have direct access to these media pools thanks to Dropbox’s first effort to target consumer-electronics devices. Here, they wrote up a native client program for the Microsoft XBox One games console. It has been achieved thanks to the ability provided by the Microsoft Universal Windows Platform to allow one to create a piece of software for a Windows 10 regular computer, a Windows 10 phone or an XBox with minimal effort to cater to that new device.

What you can do is that you can view the photos and videos and play audio files in all of the folders in your Dropbox account through your large-screen TV connected to the XBox One.

Here, you can operate its user interface using one of the XBox game controllers or the XBox Media Remote, presenting that kind of user interface expected for consumer-electronics devices such as heavy reliance on the D-pad buttons on the remote. As well, the visual interface is optimised for the 10-foot “lean-back” experience associated with the TV screen and software destined for that use case.

You can also upload files from attached USB Mass-Storage devices to your Dropbox using this same client, which can come in handy when you want to deliver photos from your digital camera’s SD card to that media pool.

Similarly, you can download and copy the files from your Dropbox account to an attached USB Mass-Storage device. A use case for this function would be to copy choice photos from that Dropbox media pool to a USB thumbdrive that you hand over to a digital print shop like most of the office-supply stores or camera stores so you have snapshots to put in that album or show to others; or to show in an offline environment.

The ability to transfer files between your USB storage device and your Dropbox folders using the Dropbox app on the XBox One means that the largest screen in the house makes it easier to make a better call about what pictures and videos should be contributed or taken further. This is due to the fact that two or more people can see a larger image to make that better call.

What Dropbox is doing with their XBox application is to prove that they can write a native front-end program for their online storage service that is relevant to consumer-electronics devices and is presented with the 10-foot “lean-back” experience. Who knows if Dropbox will develop native client software for other smart-TV, set-top box and games-console platforms to allow users to gain direct access to this online service from the biggest screens in the house.