Home
Computer Software
How is software being installed on most computers 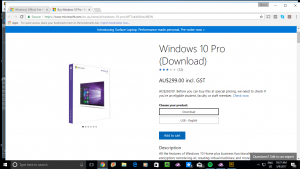 Windows 10 Pro – an example of software delivered by download

Increasingly most software is being supplied to users using a form of online delivery, whether through an app store or through a download from the developer’s Website. It is also leading to the process of buying a voucher card to facilitate the download rather than a box of media and documentation when you buy software from a bricks-and-mortar shop.

But there are two different approaches to this method of delivery. One of these is for the user to download a monolith installer that has all the necessary files to get the program up and running on your computer’s platform. Here, you would download the large file and the installer would “unpack” that large file and put the software components in place then set thing up with the host computer’s operating system so the program runs as expected. 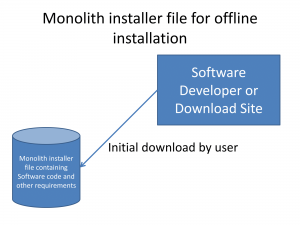 This installer resembles the traditional delivery method of supplying computer software where the program was delivered on packaged media to be loaded on the computer. It also is a practice that was used for delivering shareware and other software that was downloaded from a bulletin board or Internet download site. In the latter case, the software was delivered as a “file of files” like a ZIP file which the user expanded using a utility before they ran the software. 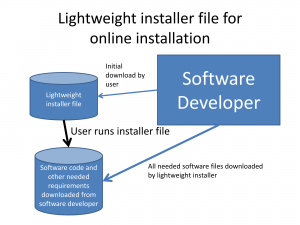 The other way that is preferred by major software and game vendors when they deliver their major titles is to have the user download and run a lightweight installer which downloads the rest of the software components on an as-needed basis. It appeals to companies who want to establish an end-to-end software-delivery infrastructure, as well as providing the files that the user really needs. This method is also preferred because it allows the software developer to deliver the latest stable version of the software’s files.

A problem that I have noticed surfacing with some lightweight installers is that some of them may crash during an installation phase and could, at worst, leave corrupted files on the host computer. This can also happen if the Internet connection becomes sub-par and the download becomes interrupted. There is also the requirement to have the Internet connection alive for the duration of your download which may be a limiting factor for costly Internet connections like mobile broadband.

A computer-support job that I had done involved the installation of some Adobe Creative Cloud software on a Mac. The person who owns the computer I am talking about bought this software through a “bricks-and-mortar” retail store but it was delivered as a software voucher which they had to redeem through Adobe’s Website. But the redemption page required us to download and run a lightweight installer to start deploying this software in the Mac.

Here, this installer wouldn’t start and would show confusing error messages. But Adobe implemented an alternative path for deploying this software. This was in the form of a “trial pack” that was a monolith installer that carried everything needed for the software to be installed on a Mac but could run either as a trial version or a full package once you supplied the credentials associated with the software voucher that they bought.

If you are finding that a lightweight installer for that new package has failed to run or the install has malfunctioned, it may be a good idea to look around the software developer’s site for an alternative installation. This may be found in the support section as something like an “offline installer” or, like in Adobe’s case, may be the trial package that “becomes the full version” when you supply the software-voucher or voucher-redemption details like a serial number or activation code.

Some if the better-behaved “lightweight-install” setups like Microsoft’s operating systems implement a quality-check process through the install process and are able to “pick up from where they left off”. Here, they can revise the files already downloaded to make sure they are error free while the download any missing or corrupted files. As well, if a download was interrupted, they identify which files have been properly downloaded and which ones haven’t so that they can fetch the remainder of the software package when the connection comes good again.

Personally, I would like to see the lightweight installer still exist as a way to deliver an always up-to-date package that represents your needs, along with one or more monolith packages representing popular packages for offline deployment or as a failover measure. As well, lightweight installers could offer an option to “start from the beginning” during the download phase for whenever you are dealing with bad downloads and you want to be sure of a good download process.

App Essentials for your smartphone or tablet

Retirement–no need to leave your computer skills at the office