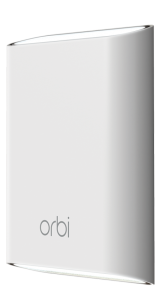 I Live in the Woods, and Netgear’s Orbi Outdoor Satellite Sounds Like a Dream | Gizmodo

NETGEAR has continued to invest in their Orbi distributed WiFi system which was initially based on the “router + extender” or star-based setup.

This is one of the few systems of this kind that implement a separate 5GHz wireless backhaul along with Web-based system management rather than cloud-based Internet-dependent system management. A recent firmware upgrade added the ability for a NETGEAR Orbi system to implement a wired backhaul thanks to the Gigabit Ethernet switch integrated in most of the Orbi indoor device.

Initially, they offered different router and satellite modules that answer different needs, either as systems or additional client modules that people can add to extant Orbi systems to shape their system’s coverage.

But they have showcased the Orbi RBS50Y weatherproof satellite module which is the first first module for a distributed-WiFi system to be designed for outdoor use. This module, which is weatherproof to IP56 standards, connects to any NETGEAR Orbi or Orbi Pro routers wirelessly using that same dedicated backhaul.

Client devices connect to the network via an AC1300 dual-band dual-stream Wi-Fi radio which can allow an extra coverage of 2500 square feet (232.3 square metres). There is also the ability to have the unit’s main LEDs work as a night-light and work to scheduled on-off times.

The RBS50Y is powered through an AC adaptor so you would need to have an electrician install a power outlet near where you want to install the satellite module. You may get away with snaking the power cable from outside to inside the building through a small hole that you drill for this purpose. The computer press expressed that it could be desirable to implement 802.3af/802.3at-compliant Power Over Ethernet so you could use Cat5 cabling and a power injector which can make the installation process easier for this device. I would add to this that such a connector could be used as a way to exploit the recently-supported Ethernet backbone functionality offered to the Orbi distributed-WiFi system.

At the moment, this device is to be sold for a suggested retail price of US$329.99 ex tax with the computer press grumbling that it costs more than an Orbi setup or standard router. But I see this more as something intended to be added on to an existing Orbi setup to take it further and this NETGEAR Orbi RBK50Y outdoor satellite module has been honoured with a CES 2018 Innovation Award.

What will Bluetooth 5 be about

Comcast–the first US cable provider to roll out IPv6