The JBL E45BT On-Ear Bluetooth Headset is capable of being a wired headset using an included wired-headset cable that has a built-in microphone and control button. Or it can become a standalone Bluetooth wireless headset when linked to your smartphone or computer via Bluetooth.

As far a storage is concerned, both of the earcups can be swiveled flat and parallel with the headband. This makes for compact storage in your briefcase, laptop bag or other personal luggage.

The JBL E45BT Bluetooth headset honours the Bluetooth Hands-Free and A2DP / AVRCP application profiles thus allowing it to work as a headset for a communications device or a music-playback device compliant to these standards.

The remote-control buttons for the volume and call-management functions are on the right-hand earcup, but JBL could make the middle button which serves as a play/pause or call answer/end button have a different tactile feel so it is easy to identify quickly. You have to hold the volume buttons down until you hear a beep to activate track-skip functionality. 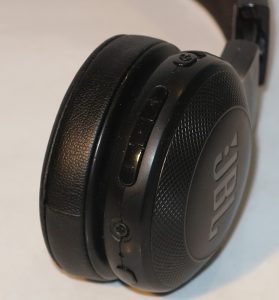 This control arrangement doesn’t allow you to start redialling a missed call or busy number or instigate a session with Siri or the Google Assistant using Bluetooth. But it provides what is essential to start and stop music, take calls, change tracks or adjust the sound.

Users can connect the JBL E45BT to the host device in a wired manner using the supplied headset cord, something that can come in handy if the headset’s battery had died out or you have to operate your mobile device on “flight mode” where you can’t use its wireless functionality. But you can’t enable Bluetooth operation while you are using the wired connection, which puts aside the idea of connecting it to a Walkman, portable radio or iPod while having it monitor your smartphone for calls.

There is multipoint support so you can use one pair of these headphones with two host devices. One situation that this can cater for would be if you use two phones such as a personal phone tied with your own account and a work-supplied phone tied to your employer’s account. Or it could cater towards you using a smartphone and a laptop or tablet at the same time with the laptop or tablet being used with video content, music or games while you have the smartphone ready to answer calls.

The setup procedure is relatively simple by you pressing the Bluetooth button on the headset’s right earcup to make it discoverable for the second source device then using the second device’s user interface to connect with the headset. In the case of a Windows-10-equipped laptop, you would use the Bluetooth menu in the Devices part of the Control Panel and click “Add A Device”. The headset will then be exclusively used by the second device.

Then your press the Bluetooth button again on the headset to make the headset discoverable and reconnect the original host device to the headset using that device’s user interface. Here, you have established a simple multipoint setup where whichever source device “comes on” plays through the headset. Phone calls or communications applications on each of the host devices that use the Bluetooth Hands Free Profile will always have priority over either device’s multimedia sources.

The multipoint functionality is destroyed if either device is disconnected but the JBL headset will normally re-establish this setup if you simply enable the connection again for both the same host devices.

The user-comfort level for the JBL E45BT headset is very similar to most of the recent supra-aural headsets in that they don’t feel heavy or hard on your head even after a long time of use. The vinyl-covered earcups don’t even become sticky when you use this headset on a hot day.

The JBL E45BT Bluetooth headset can handle strong bass response but you need to use equalisation at the source device to ramp up the bass and treble. Other than than it does well with music and similar content.

As well, it conveys a sound quality that doesn’t cause listener fatigue during extended listening.

I have watched a foreign-language European TV crime drama and had found that the voices come through intelligibly and clearly with the full weight. As well, the sound effects came through clearly and naturally especially with gunshot or vehicle sounds which will also matter with the games played by “core” gamers.

Communications on phone or computer

The JBL E45BT Bluetooth headset even works well for communications applications with the ability to hear whom I talk to clearly while they can understand me. It doesn’t matter whether it is the regular mobile-telephony use or through one of the various VoIP services. As well, it can handle soft-spoken callers or those with a distinct accent as well as those who are on a difficult connection.

I assess headphones also to identify how they perform in noisy environments like on a bus or in an underground train. This is to assess how they would cope when being used to provide you with entertainment while travelling on public transport or whether they can even shut out a noisy environment so you can make that videocall or listen to some music.

The JBL E45BT Bluetooth headset doesn’t provide much in the way of noise reduction and you would have to make sure your program material or your phone’s call-volume setting was significantly loud if you want to have it compete in a noisy environment. This is something that would be expected for on-ear headphones.

One key feature that the JBL E45BT is mission out on is the ability to support a “press-and-hold” operation for the Play/Pause/Call button. This would provide access to voice-driven operation on smartphones that run a voice-driven personal assistant, or could allow the ability to use the headset’s buttons to redial the last call you made or a call you missed.

Personally, I would like to see the microUSB connection on a headset used not just for charging a Bluetooth wireless headset like the JBL E45BT. Here, I would like to see these devices implement the USB Audio Class and Human Interface Device classes so they can become a wired digital headset when connected to a host device using a USB or Apple Lightning connection. This could be seen as a way to provide high-quality digital audio from a laptop or newer smartphone especially where the 3.5mm audio jack is likely to be seen as being one the way out.

As for the battery, I would personally like to see it being user-replaceable so you can keep the headset going as a Bluetooth headset for a long time rather than throwing it away if the battery starts to die out.

JBL could provide support for concurrent “wired + wireless” operation so that the headset could work as a wireless headset for one device but as wired headphones for another device. A situation where this can come in handy is whenever you use a headset like this with a music player or portable radio for audio content and your smartphone for calls. This situation is underscored especially with portable FM or DAB radios that use the headphone cable as their antenna, but is also underscored if you are using legacy media like cassettes or CDs or are using a high-capacity digital audio player for your music.

Another issue still to be ironed out with the use of Bluetooth headsets is to allow you to manage calls from VoIP platform software like Facebook Messenger or Viber using the controls on these headsets. At least this should be about the call-control buttons to answer or end an incoming call, but it will be an issue that needs to be addressed by Apple and Google as part of developing their iOS and Android mobile operating systems.

The JBL E45BT represents what is feasible for a good-quality baseline “over-the-ear” Bluetooth headset. Here, I would recommend this headset as something to be after if you want a general-purpose headset to work with your smartphone, tablet or laptop.