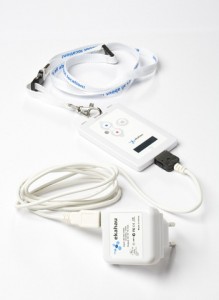 In some workplaces where staff work alone at night or other times where they are in danger, portable emergency-call buttons are often used. Initially they were the same size as an older garage-door opener but they are becoming the size of a pendant, badge or fob. As well, rather than these devices lighting up a separate alert panel, they light up a message or “throw up” a map with an indicator on a regular computer running building-security software to show where the danger is.

Initially, they were being positioned for very-high-risk workplaces like psychiatric care or the justice and allied settings. But other workplaces where staff work alone are seeing these devices as an important safety measure, usually due to various occupational health-and-safety requirements.

For example, hotels in the USA are moving towards having Housekeeping staff use these devices in response to workplace agreements, industry safe-work safe-premises initiatives or city-based legal requirements. But these systems are being required to work in conjunction with the Wi-Fi networks used by staff and guests for business and personal data transfer.

A device of the kind that I had covered previously on HomeNetworking01.info was the Ekahau Real Time Location System. This was a pendant-style “panic-button” device, known as the T301BD Pager Tag which had an integrated display and call button. It also had a setup that if the tag was pulled at the nexkstrap, it would initiate an emergency response.  I also wrote an article about these Ekahau devices being deployed in a psychiatric hospital as a staff emergency-alert setup in order to describe Wi-Fi serving a security/safety use case with the home network.

This application is being seen as a driver for other “Internet-of-Things” and smart-building technologies in this usage case, such as online access-control systems, energy management or custom experiences for guests. As I have said before when talking about what the smart lock will offer, the hotel may be seen as a place where most of us may deal with or experience one or more of the smart-building technologies. Also I see these places existing as a proving ground for these technologies in front of many householders or small-business owners who will be managing their own IT setups.

One of the issues being drummed up in this article is quality-of-service for the Internet Of Things whereupon the device must be able to send a signal from anywhere on the premises with receiving endpoints receiving this signal with no delay. It will become an issue as the packet-driven technologies like the Internet replace traditional circuit-based technologies like telephone or 2-way radio for signalling or machine-to-machine communication.

The hotel application is based around the use of multiple access points, typically to provide consistent Wi-Fi service for staff and guests. Such a setup is about making sure that staff and guests aren’t out of range of the property’s Wi-Fi network and the same quality of service for all network and Internet use cases is consistent throughout the building. Here, concepts like mesh-driven Wi-Fi, adaptive-antenna approaches, load-balancing and smart smooth roaming are effectively rolled in to the design of these networks.

Wi-Fi access points in the smart-building network will also be expected to serve as bridges between IP-based networks and non-IP “Internet-of-Things” networks like Bluetooth Low Energy (Bluetooth Smart), Zigbee, Z-Wave or DECT-ULE. These latter networks are pushed towards this application class due to the fact that they are designed to support very long battery runtimes on commodity batteries like AA Duracells or coin-style watch batteries. There will be an emphasis on localised bridging and the IP-network-as-backbone to provide better localisation and efficient operation.

These systems are being driven towards single-screen property-specific dashboards where you can see the information regarding the premises “at a glance”. I would reckon that operating-system-native applications and, perhaps, Progressive Web App versions will also be required to use operating-system-specific features like notification-panels to improve their utility factor in this context.

As far as the home network is concerned, I do see most of these technological concepts being rolled out to the smart home with an expectation to provide a similar service for householders and small businesses. This is more important as ISPs in competitive markets see the “Internet of Things” and improved Wi-Fi as a product differentiator.

The use of multiple Wi-Fi access points to cover an average home being made real for a home network thanks to HomePlug wireless access points, Wi-Fi range extenders and distributed-Wi-Fi systems that will bring this kind of localised Wi-Fi to the smart home. Typically this is to rectify Wi-Fi coverage shortcomings that crop up in particular architecture scenarios like multi-storey / split-level premises and use of building materials and furniture that limit RF throughput. It is also brought about thanks to the use of higher-frequency wavebands like 5GHz as Wi-Fi network wavebands.

There will be an industry expectation to require access points and similar devices to provide this kind of “open-bridging” for Internet-of-Things networks. This is more so where battery-operated sensor or controller devices like thermostatic radiator valves and smart locks will rely on “low-power” approaches including the use of Zigbee, Z-Wave or similar network technology.

It will also be driven typically by carrier-supplied routers that have home-automation controller functionality which would work with the carrier’s or ISP’s home-automation and security services.

To the same extent, it may require “smart-home / building-automation” networks to support the use of IP-based transports like Wi-Fi, HomePlug and Ethernet as an alternative backhaul in addition to their meshing or similar approaches these technologies offer to extend their coverage.

In some cases, it may be about Zigbee / Z-Wave setups with very few devices located at each end of the house or with devices that can’t always be “in the mesh” for these systems due to them entering a “sleep mode” due to inactivity, or there could be the usual RF difficulties that can plague Wi-Fi networks affecting these technologies.

DECT-ULE, based on the DECT cordless-phone technology and is being championed by some European technology names, doesn’t support meshing at all and IP-based bridging and backhauls could work as a way to extend its coverage.

Such situation may be rectified by access points that use a wired backbone like Ethernet or HomePlug powerline.

In the context of the staff panic button use-case, it will roll out to the home network as part of a variety of applications. The common application that will come about will be to allow the elderly, disabled people, convalescents and the like who need continual medical care to live at home independently or with support from people assuming a carer role.

This will be driven by the “ageing at home” principle and similar agendas that are being driven by the fact that people born during the post-war baby boom are becoming older as well as the rise of increased personal lifespans.

Similarly, this application may also be underscored as a security measure for those of us who are concerned about our loved ones being home alone in a high-risk environment. This is more so in neighbourhoods where the risk of a violent crime being committed is very strong.

But I would see this concept work beyond these use cases. For example, a UK / European central-heating system that is set up with each radiator equipped with a “smart” thermostatic radiator valve that is tied in with the smart-home system. Or the use of many different control surfaces to manage lighting, comfort and home-entertainment through the connected home. This is something that will rise up as most of us take on the concept of the smart home as the technology standardises and becomes more affordable.

What is being highlighted is the requirement for high quality-of-service when it comes to sending “Internet-of-Things” signalling or control data as our networks become more congested with more gadgets. Similarly, it is about being able to use IP-based network technology as a backhaul for non-IP network data that is part of the Internet-of-Things but providing the right kind of routing to assure proper coverage and quality-of-service.

How to effectively establish that Wi-Fi-based mobile network