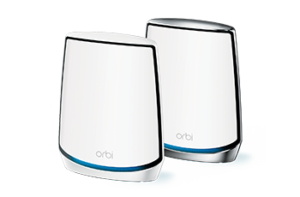 As Wi-Fi 6 (802.11ax) wireless networking comes to the fore, there will be a desire to see distributed-wireless-network systems that support this technology. Here it’s about being able to support many Wi-Fi client devices like laptops, tablets and smartphones along with devices that are designed “Wi-Fi first” including smart-home devices.

NETGEAR have started to refresh the Orbi distributed Wi-Fi system by making a new version that supports this new technology as part of the product lineup they are premiering in Las Vegas at this year’s Consumer Electronics Show. It uses the separate radio backhaul that their Orbi system is know for, thus avoiding a dent in performance that can be brought about with systems that use the main “fronthaul” Wi-Fi segment for their backbone data transfer.

It is expected to appear during the second half of 2019, primarily as an updated take of the RBK50 wide-coverage devices. A question that will perplex those of us who have an Orbi distributed-Wi-Fi setup is whether the existing Orbi equipment will work with the newer Wi-Fi 6 Orbi devices.

This is more so where smaller or specialised Orbi satellite modules like the RBS50 Orbi Outdoor Satellite unit or the Orbi Voice which is a combination of a satellite unit and Amazon-Alexa-driven smart speaker are part of your Orbi setup. Or you like the idea of “pushing down” existing equipment to secondary purposes so you get more value out of the equipment you own.

What is being highlighted is the idea of using Wi-Fi 6 as a future-proof approach for wireless local networking, including distributed- Wi-FI setups.

A Surface Book variant is actually a portable gaming rig