I am reviewing the Brother MFC-J1300DW INKVestment colour inkjet multifunction printer. This is Brother’s attempt at a high-ink-capacity approach to inkjet printing where there is an ink tank for each colour. But, unlike Epson who use separate tanks that are filled from a bottle, they use cartridges which hold some of the ink and the ink is transferred to a holding tank before it is used.

There is the Brother DCP-J1100DW which doesn’t have the fax ability and may be an economical path. Luckily it has the automatic document feeder which is of importance if you do want to scan or copy multiple pages at once. 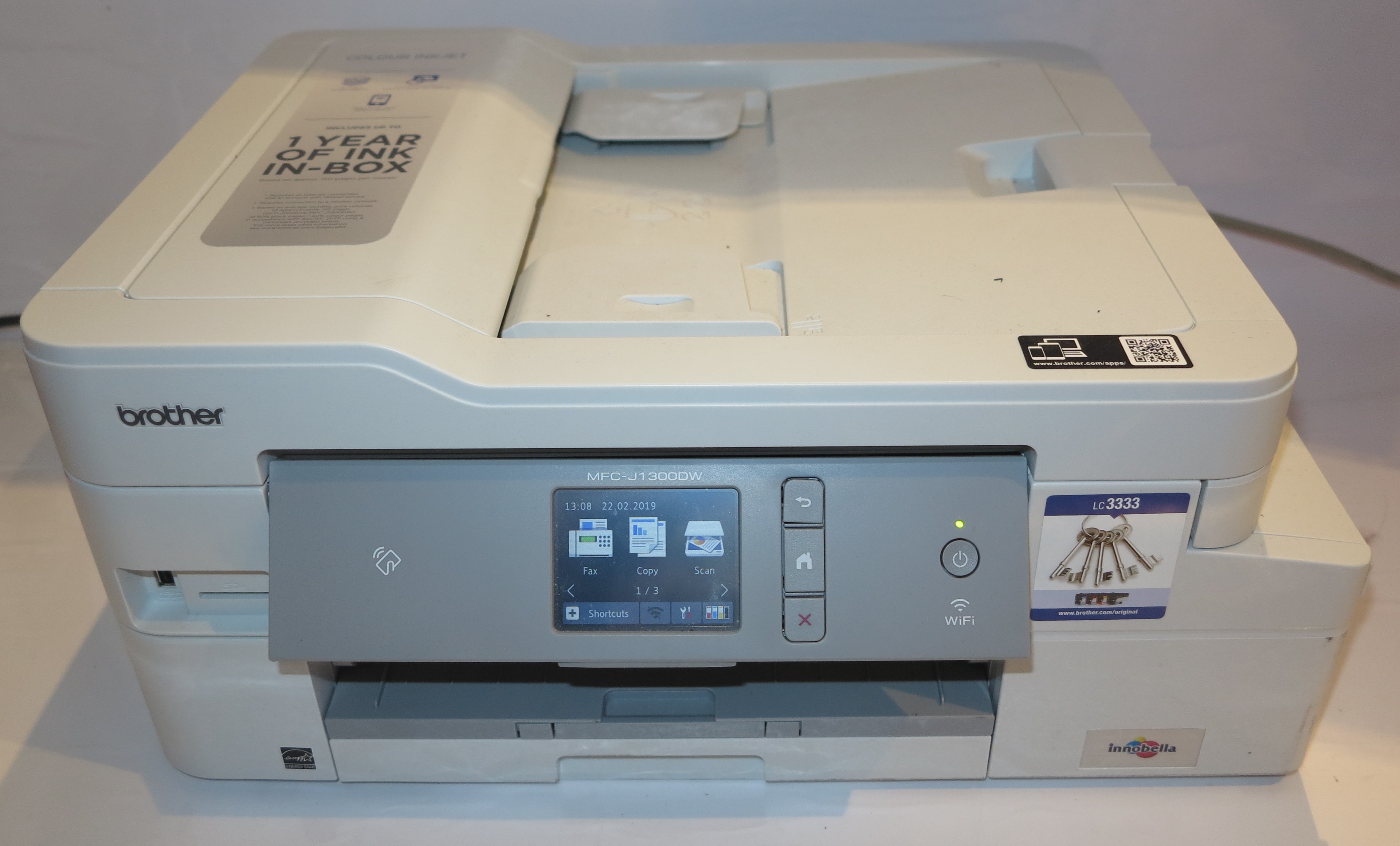 The printer can be connected directly to the host computer using a USB cable. But it can be connected to your network via Ethernet cable or Wi-Fi wireless. This supports the ability to directly enter your Wi-Fi network’s passphrase as part of a wizard-based setup routine on the control panel.

Like with most of Brother’s inkjet printers, the cables for the USB or Ethernet connection are snaked in under the scanner platen which may be seen as being awkward for a newcomer. 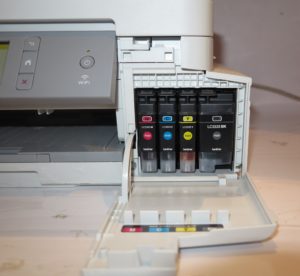 The Brother INKVestment approach offered by the MFC-J1300DW inkjet multifunction printer is based around high-capacity cartridges that offload ink in to tanks integrated in the machine. This is based upon a continuous-inking approach that Epson and others use for their “tank-based” printers but uses the simplicity associated with cartridge-based printers. It meant that there were no special procedures needed to be performed to get the printer up and running.

Being a compact printer, the Brother MFC-J1300DW uses the traditional portrait feed-through method that most inkjet printers use. As well, it has a small A4 paper tray for storing paper, but this can be a limitation if you expect it to print a large job.

There is a low-profile automatic document feeder that works as expected and can come in handy for copying or scanning multiple pages or sending a fax.

A low-profile design is what this printer is about

There is support for Brother’s cloud-driven Web Connect functionality. This includes cloud-hosted scan-to-email, a fax-vault function with the ability to receive faxes to email or online storage, amongst other things.

A problem that can appear with “walk-up” scanning directly to removeable media is that the pictures don’t come out with a similar kind of quality that you would expect if you scan to a regular computer. I had noticed this with a project where I was to scan some pictures for broadcast use and found that you can’t determine the level of JPEG compression for pictures stored to the removable medium. This could be rectified through the use of an option to determine the JPEG compression level for SDXC cards or large-capacity high-speed USB devices along with support for USB 3.0 for the “walk-up” USB interface.

There is a USB port and SD card slot for printing photos from memory cards but this function is very limited. It doesn’t support DPOF printing where you can set up a print order on your camera, nor does it support PictBridge printing from your camera. As well, I could only see the first 300 pictures on an SDHC card that has 1099 pictures on it available for printing. What seems to be happening is that the user class who value the high-quality digital cameras is being forgotten about when it comes to walk-up printing functionality.

The Brother MFC-J1300DW is able to work as a Super G3 fax machine but doesn’t support T.37 or T.38 IP-fax endpoint abilities. It may not be seen as an important feature except for some professions like the legal and medical profession who do rely on fax transmission of documents. This is augmented with a “fax vault” function that allows received faxes to be forwarded to an online-storage service like Dropbox or an email address, but this function requires forwarded faxes to be printed locally by the machine as they arrive.

I would personally require this forwarding-to-online-storage function to have an option of not printing faxes successfully forwarded to online storage. This would be of value for out-of-hours fax reception in an environment where there is a risk of confidential faxes being seen by the wrong eyes. It could also use an SSD or SD card as an alternative to these options where you don’t want confidential material on an online service or via an insecure email setup.

I have installed the drivers from Brother’s Website for this printer on to both my Windows 10 computer and a friend’s Macintosh running one of the newer versions of MacOS which was to be used by them to scan some photos. Here, the driver-installation procedure went according to plan for both platforms.

I used my Samsung Android mobile phone to print out an email using the Mopria driver-free printing protocol and this setup worked properly via the home network. Here, the Mopria subsystem discovered the printer properly and turned out the document as expected.

I kept an eye on how this printer handles two-sided printing, especially when it comes to any “drifting” between the front and back of the page. There wasn’t any of that issue with this machine which would make it work properly with desktop-publishing jobs involving oddly-shaped documents like bookmarks or hang-tags.

I have test-printed two photos on to photo-grade paper and have found that there is the sharpness and definition in the images. The pictures do come out bright but the colour saturation could be improved slightly especially when handling reds.

I have scanned some photos with this printer and have found that there are problems with handling high-contrast photos especially if they are the kind of snapshot prints you get from a minilab. It may be a problem associated with most consumer scanners especially when it comes to reflective material.

This baseline home printer could be improved upon through the use of landscape printing. It is more so if the goal is to make this class of home multifunction printer more compact. As well, it could benefit from a “mezzanine” photo-printing tray like what the previous Brother home MFC printers offered along with having a deeper paper tray so you can have a larger amount of paper on board.

Having a higher-capacity paper tray can exploit the INKVestment system further by allowing for larger print runs to be fulfilled. Here, it would work well towards the end of school or college / university semesters where there is the likelihood of large assignments being printed out, whether at a proof-reading stage or for handing in.

Similarly, having the output tray as a separate item that is integrated with the printer rather than being attached to the paper tray can make the printer easier to load. This could also allow Brother to innovate further by designing an output tray that automatically extends when a print job is about to be turned out and retracts when the documents are removed.

Most of these Brother printers could support SMB or HTTP-based scanning to or printing from network and Internet resources. A feature like that could make more use of NAS systems as a digital document archive. Similarly, Brother could maintain interest in the standards associated with walk-up printing of digital images from cameras , be it PictBridge wired connectivity or DPOF removable-media-based print orders. This would earn its keep with printing out “there-and-then” prints of photos you took with your digital camera.

A question that can easily crop up with the Brother “INKVestment” approach is the cost of buying replacement ink cartridges at a later time like after that promised year of use. Here, it will be about whether it would be cost-effective to buy newer cartridges for the printer or simply to replace it with a machine of similar standard. But I have found that the cost to replace all cartridges on this printer wouldn’t be more than the initial purchase price of this machine, thus it doesn’t appear to be “disposable”.

Similarly, using the tank approach in the INKVestment system could allow for the ability to replace empty cartridges while there is ink in the tank so as to cater for heavy print runs. This could be facilitated through the use of an indicator that shows whether a cartridge is empty while there is reserve ink in the tank. Even an option for higher-capacity cartridges can come in handy where there is a situation of peak usage.

I expect that the Brother MFC-J1300DW INKVestment colour inkjet multifunction printer is being positioned as a general-purpose home or home-office printer with the focus on a long time between replacing ink. Here, I would see it work well as a multifunction printer to be kept in a study or similar location and handle a typical household’s print requirements.