A German company has fielded a videoconferencing packaging which is Europe’s answer to what Zoom, Skype and Microsoft Teams is about. This is part of a variety of efforts by European governments and businesses to create credible mainstream IT service alternatives to what the USA and China are offering while respecting European values. One example is efforts by Germany to create a public data-processing cloud that is within that country’s borders as part of leading an effort towards a Europe-wide public cloud. 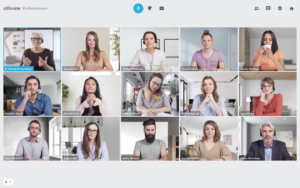 This company, Alfatraining Bildungszentrum GmbH which is based in Karlsruhe, Baden-Württenburg, Germany, has released the Alfaview video-conferencing platform. Here, this platform places privacy and European sovereignty first in the way it is engineered.

The Alfaview platform’s servers are based in Germany and the company heavily underscores the spirit of European values especially with the GDPR directive. Videoconferencing data is encrypted using TLS/AES256 protocols during conversations. But they can allow the use of non-German services as long as they are in the EU, again underscoring European values. There will also be the ability for people to join the platform from all over the world, thus avoiding a problem with European technologies and services where they have limited useability from areas beyond Europe.

As well, it answers the weaknesses that are associated with the videoconferencing establishment when it comes to offering this kind of service for consumers and small businesses. This encompasses Zoom not being all that secure, Microsoft not maintaining Skype and focusing the Teams videoconferencing package just for big business. As well, Facebook who has come on the bandwagon with Messenger Rooms is not all that respected when it comes to security and privacy.

Alfaview runs natively on Windows, MacOS, Linux (Debian package), iOS and will soon be ported for Android. But they could simply reuse the Linux package as a code base for reaching out to ChromeOS and Android platforms. As well, I am not sure if the iOS version is optimised for the iPads which is something I consider of importance for mobile platforms that have tablet devices because these devices have a strong appeal to multi-party video conferences.

There is a free package for individuals and families to use which provides for one room that has 50 participants. As well, Alfaview has a Free Plus package pitched towards the education and non-profit sector. Here, this one has most of the features that the corporate package has like 40 rooms per account with 50 participants. There is also the ability to run 10 concurrent breakout groups per room.

This is in conjunction to various paid plans for ordinary businesses to buy in to for their videoconferencing needs. Alfaview even provides the ability to offer the software in a “white-label” form for companies to brand themselves.

But what I see of the Alfaview approach is that the Europeans are offering a Zoom-style service respecting their values and competing with what the Silicon Valley establishment are offering.

The smart-lock arrives in the key-in-knob form factor