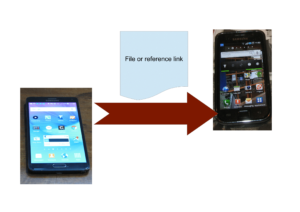 Google has been doing work on its own across-the-room data-transfer technology, now known as Nearby Share. It is the Android platform’s answer to Apple’s AirDrop feature that many iOS users are using to “beam” photos to other users.

There have been previous attempts on the Android platform to offer this feature like Bluetooth Object Push Profile and NFC-based technologies like Android Beam.

But this will work in a true-wireless approach with support for Bluetooth, WebRTC and peer-to-peer Wi-Fi technologies. That means it isn’t dependent on a functioning Internet connection for it to run.

Your Android phone or tablet will need to have Android 6.0 or newer and the functionality will be delivered as part of the Google Play Services update. This means that it is updated independently of the operating system codebase, thus answering the problem associated with a lot of Android devices where manufacturers and carriers won’t support the device two years after it is launched.

This feature will have privacy-focused options like anonymous transfer and the ability for users to limit their discovery to only their contacts or only to selected contacts. As well, recipients don’t see the actual material about to be transferred so they don’t get shocked by someone pushing out unwanted material.

A good approach to handling AirDrop, Google Nearby Share and similar across-the-room data-transfer setups in a safe manner is to keep your devices undiscoverable to others. Then, when you have confirmed face-to-face that you are intending to use this function, then you make your device discoverable in order to receive the content.

It is available for ChromeOS but will be arriving as part of other platform primarily through software that Google develops for that platform. But there needs to be further work on having true federation for these across-the-room data-transfer protocols in a manner that doesn’t necessitate the installation of extra application software.

For Android users, Google Nearby Share is a step in the right direction to having across-the-room data transfer happening on that platform.

What is this about “cyberflashing” and how to prevent it?

Integrating a Bluetooth headset in to a beanie