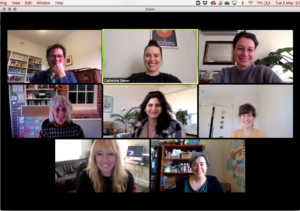 The idea of a Zoome or similar platform user joining the same videoconferences frp, multiple devices could be considered in some cases

But most of these platforms allow a user to use one device at a time to participate in the same videoconference. Zoom extends on this by allowing concurrent use of devices of different types (smartphone, mobile-platform tablet or regular computer) by the same user account on the same conference.

But why support the concurrent use of multiple devices?

There are some use cases where multiple devices used concurrently may come in handy. 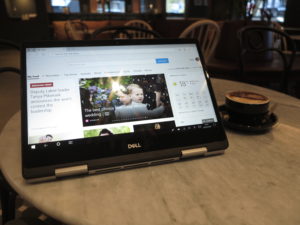 One of these is to assure a high level of mobility while participating in a videoconference. This may be about moving between a smartphone that is in your hand and a tablet or laptop that is at a particular location like your office.

like in a kitchen with this Lenovo Yoga Tab Android tablet

Similarly, one or more users at the same location may want to simply participate in the videoconference in a passive way but not be in the presence of others who are actively participating in the same videoconference. This may simply be to monitor the call as it takes place without the others knowing. Or it could be to engage in another activity like preparing food in the kitchen while following the videocall.

As far as devices go, there may be the desire to use a combination of devices that have particular attributes to get the most out of the videocall. For example, it could be about spreading a large videoconference across multiple screens such as having a concurrent “tile-up” view, active speaker and supporting media across three screens.

Or a smartphone could be used for audio-only participation so you can have the comfort of a handheld device while you see the participants and are seen by them on a tablet or regular computer. As well, some users may operate two regular computers like a desktop or large laptop computer along with a secondary laptop or 2-in-1 computer.

Support for other device types by videoconferencing platforms

Another key trend is for videoconferencing platforms to support devices that aren’t running desktop-platform or mobile-platform operating systems.

Or Google providing streaming-vision support for a Google Meet videoconference to a large-screen TV via Chromecast. It is something that could reinvigorate videoconferencing on smart-TV / set-top box platforms, something I stand for so many people like a whole family or household can participate in a videoconference from one end. This is once factors like accessory Webcams, 10-foot “lean-back” user interfaces and the like are worked out.

It can also extend to the idea of voice-assistant platforms extending this to co-opting a smart speaker and a device equipped with a screen and camera to facilitate a videoconference.  This could be either with you hearing the videoconference via the smart speaker or the display device’s audio subsystem.

What can be done to make this secure for small accounts?

There can be security and privacy issues with this kind of setup with people away from the premises but operating the same account being able to join in a videoconference uninvited. Similarly, a lot of videoconferencing platforms who offer a service especially to consumers may prefer to offer this feature as part of their paid “business-class” service packages.

One way to make this kind of participation secure for a small account would be to use logical-network verification. This is to make sure that all devices are behind the same logical network (subnet) if there is a want for multiple devices to participate from the same account and in the same videoconference. It may not work well with devices having their own modem such as smartphones, tablets or laptops directly connected to mobile broadband or people plugging USB mobile-broadband modems in to their computers. Similarly, it may not work with public-access or guest-access networks that are properly configured to avoid devices discovering each other on the same network.

Similarly, device-level authentication, which could facilitate password-free login can also be used to authenticate the actual devices operated by an account. A business rule could exist to place a limit on the number of devices of any class but operated by the same consumer account able to concurrently join a videoconference at any one time. This could realistically be taken to five devices allowing for the fact that a couple or family may prefer to operate the same account across all the devices owned by the the members of that group, rather than have members maintain individual accounts just bound .

The idea of allowing concurrent multiple-device support for single accounts in a videoconference platform when it comes to videoconference participation is worth considering. This can be about increased mobility or user comfort or to cater towards the use of newer device types in the context of videoconferencing.

The Cisco Cius business-pitched Android tablet – could this provide a platform to compete with the iPad?