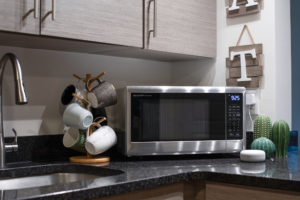 Most of us who use a microwave oven tend to specify cooking times and power intensities for each cooking job. This is even though most of today’s microwave ovens use job-specific cooking functions that are available to us. But some of us may decide to use a “popcorn” cooking function to cook most microwave popcorn.

These functions can confuse most of us due to different approaches to invoking them that exist between different makes and models of microwave oven.  As well, other differences that will crop up include how long these tasks are expected to take. It is also analagous to working from any recipes that are part of your microwave oven’s documentation, because these may not work out correctly if you end up using a different appliance.

Here, this issue will be considered important as more of us place value on the microwave as a cooking option for something like, perhaps, those green vegetables. It can also bamboozle anyone who uses traditional cooking techniques like the conventional oven but finds themselves in a situation where they have to primarily rely on the microwave oven for cooking needs like when they stay in a serviced apartment or AirBnB.

Here, the difference is to use Alexa as a gateway to the advanced cooking tasks that these microwaves offer. The press release talked of us saying to an Amazon Echo device “Alexa, defrost 2 pounds of meat” and the microwave will be set up to thaw out two pounds of frozen meat. The larger model of the two will have the ability for you to ask Alexa to set the microwave up for something like cooking broccoli or other veggies.

I see this as being about using voice assistant platforms to open up a common user interface for the advanced microwave-cooking tasks that your microwave would offer. But for this to work effectively, the user needs to know what the expected cooking time would be for the task and when they need to intervene during the cooking cycle.

As well, more of the voice assistant platforms need to come on board for this approach to advanced microwave cookery. Let’s not forget that the display-based voice assistants can even come in to their own in this use case such as to list ingredients and preparation steps for what you intend to cook.

Here, the voice assistants will become a way to lead users to use the microwave beyond reheating food, melting butter and chocolate or cooking microwave popcorn/

Internet away from home having to satisfy new expectations

What is happening with rural broadband in the UK