I am reviewing the Hewlett-Packard LaserJet Pro P1560 Series desktop laser printer which is part of a range of monochrome laser printers offered by HP for “quick-form-turnout” applications like invoices or health-insurance forms at a medical clinic. 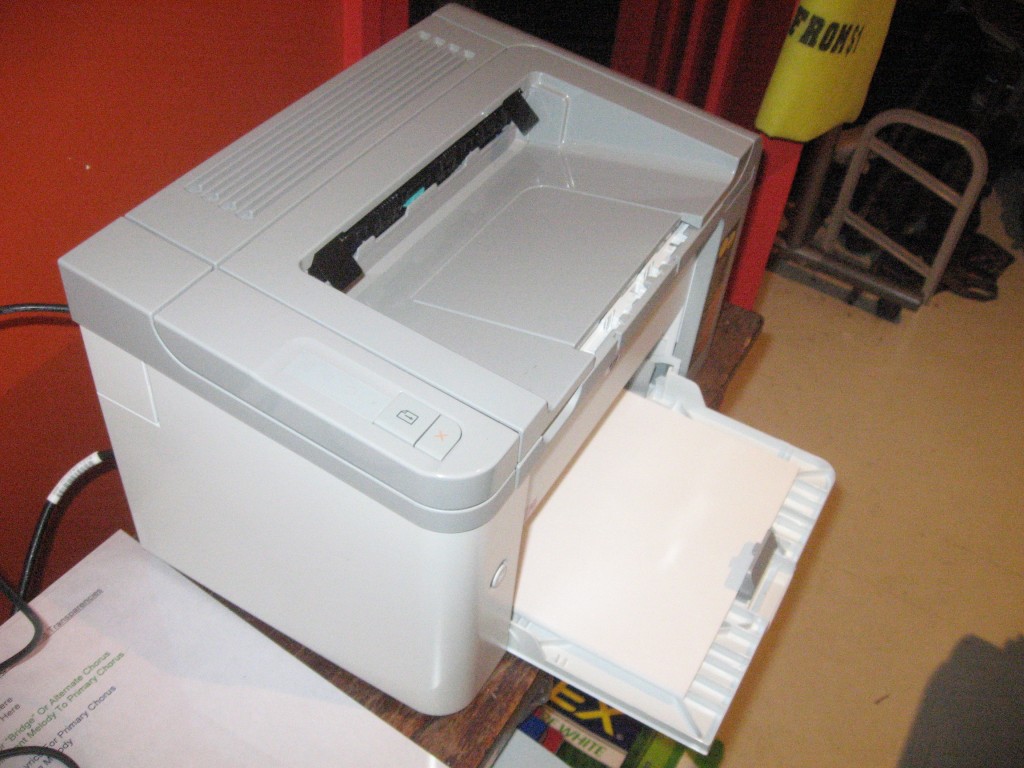 This model, which costs AUD$329, that I am testing is an entry-level desktop unit that is directly-attached to the computer via a USB cable.  The P1600 Series is the “step-up” version that has the same functionality but is equipped with network-printing ability as well as a duplexer for printing on both sides of the paper. This is in a similar practice to how most vehicles are sold with extra options being part of increasingly-expensive “trim levels”.

It works with an HP CE278a toner cartridge which has an average page yield of 2100 pages and costs AUD$94.60 each on the streets. This would lead to a running cost of approximately AUD$0.04 per page.

The main feature that impressed me about this laser printer was that I didn’t need to find a CD or download files from HP’s Website to get the printer going with my Windows 7 computer. Once it was plugged in to the USB hub, the computer discovered a USB Mass-Storage device on the printer and mounted it as a drive letter. Then I went to that drive letter with Windows Explorer and ran the Setup file whereupon the drivers were in place and the printer clicked in to action with the Windows Test page on the output tray on the printer very shortly. I have touched on this earlier in my blog as a separate article because it was a “dream come true” when it comes to printer setup. The P1600 would allow me to “hit” its Web front-end to load the necessary driver files at least when installing it on the network.

The other thing I am impressed about is a very quick “cold start”. I have often seen older laser printers and copiers require a warm-up time of a few minutes before they are ready to print. This is mainly to have the fuser rollers warm enough and able to melt the toner in to the paper. Here, the printer was able to be ready to print from “cold standby” within four seconds.

Once underway with a print job, it took four seconds to print each page and wasn’t running very hot. This is even though I ran a copy of the PDF user manual as a large “reliability-test” print job. There may have been some steam coming out of the output slot but this may be to do with moisture buildup in the machine which had been unpacked shortly before this print run.

The printer has an automatic “energy-save” function where it powers down to a “cold standby” mode whenever there are no print jobs coming through for a few minutes. It only uses enough power to “listen” to the USB port for print jobs from the host computer.

This unit is at least an example of improving the design of the equipment to make it more useable for all people.

Beyond the need to provide CD-free setup for the Apple Macintosh platform, there haven’t been any further limitations that I have come across with this direct-connect printer.

The HP LaserJet Pro 1560 Series printer could be best positioned for single-computer workstations like reception desks in small clinics and the like for use as a printer for “turning out” documents like invoices or similar forms. It would be best used as an “exact replacement” for an older direct-connect monochrome laser printer that has come to the end of its useful life.

I have mentioned in this blog about the need for printer manufacturers to move away from supplying CDs or USB memory keys full of printer drivers with their printers. What I was wanting to see was the driver software being held in separate memory on the printer that is accessible as a USB Mass-Storage Device for direct-attached printers or through common network protocols for network printers.

At last, Hewlett-Packard has answered this need as far as Windows users are concerned with the LaserJet Pro 1560 and 1600 Series monochrome laser printers, one of which will be reviewed in this blog. The review printer which is the LaserJet Pro 1560 – a low-end direct-attached printer, was set up without me needing to find a CD in the box.

1. Once the printer was connected to my computer’s USB socket and to the power, Windows 7 discovered the printer and mounted an extra drive letter for that printer.

2. I then visited the extra drive and ran the setup file, whereupon the printer’s driver set was installed and I was offered the ability to print the Windows Test Page.

The networked versions allowed you to log in to the printer’s IP address from your browser, once you have printed the network information page, in order to download the driver software.

No mess, no fuss!

No need to worry about the printer setup CD anymore!

Another improvement would be to let Windows discover the driver set without any user intervention once the printer is connected to the USB port. This could then lead to true plug-and-play printing for this class of printer.

Furthermore, I would like to see this function made available in more of the consumer multifunction printers because the people who use these printers are more likely to end up with grief because they of driver-install issues.

The function can be augmented by allowing for driver update procedures to include in-field refreshing of the driver set available on the printer. This can lead to support for newer operating platforms or improvements that are provided in the current operating platforms.