I am reviewing the Cooler Master NotePal infinite Evo laptop cooling pad which is one of may laptop rests that are equipped with a forced-air cooling subsystem. Here, these units use this fan-forced air to cool the underside of the laptop which, in a lot of older and “thin-and-light” designs, can become very hot. An example of this was the HP Envy 15 laptop that I had previously reviewed on this site. Here, this unit wouldn’t take long to become uncomfortably hot during operation.

This situation may lead to the computer being uncomfortable to use after a significant amount of time and there can be a chance of heat building up under the computer, thus causing overheating and a shortened lifespan for that laptop.

Cooler Master is a name primarily associated with the manufacture of aftermarket computer cooling systems for desktop PCs. These are usually in the form of CPU fan subsystems or add-on case fans that are used as part of tuning-up “LAN-party” PCs for maximum gaming performance, similar to “hotting up” cars for maximum street performance. 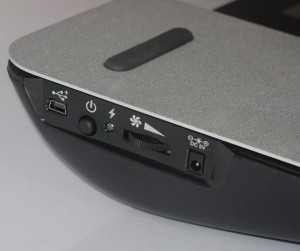 This NotePal Infinite Evo is based around an aluminium panel with rubber strips to hold the laptop on. This panel is positioned ant an angle and has two small fans underneath it to create the air draught under the computer. This is the reverse to the typical fan heater which draws the cold air in the top and forces the heated air out the heater’s front grille. Both of these fans are variable-speed fans that are adjusted by use of a thumbwheel on the left side of the unit. 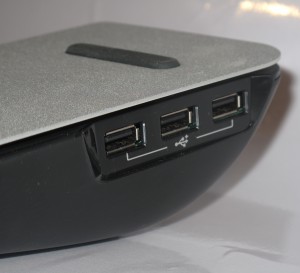 This is powered through a USB connection to the host laptop computer and there are 3 USB 2.0 ports on the right side of the laptop cooling mat.This is unlike most of the cheaper laptop cooling pads that don’t have a USB hub, thus leaving you without a USB connection when you use them. Thee is also a 5V DC power connection for use with a 5V power adaptor if you need to run this unit as a self-powered USB hub. Here, the external power supply would be required if you were to connect the typical 2.5″ USB hard disk to the unit’s hub while using it as a cooling pad.

The air is drawn in through large grilles on the back of the unit and expelled through a small air scoop just under where the computer sits.

Judging from how I handled the Cooler Master  laptop cooling pad, I noticed that it was very well built. There was nothing loose about it and the controls operated properly and smoothly as on good-quality equipment.

The NotePal Infinite Evo mat is lighter than the typical 15” laptop which makes it easier to transport with the laptop. There are large rubber pads to prevent the pad slipping across table tops and protect those polished wooden dining or coffee tables from scratches.

During operation, there is a slight buzz from the fan at high speed, which is well below typical conversation level. I have observed this with a regular laptop being placed on the cooling pad. I have checked for excessive vibration while the fan is at the same high speed and there wasn’t any of that vibration.

The USB hub works according to the standards for a USB hub without the need for driver CDs. Remember that it is a bus-powered USB hub unless you connect a 5VDC power supply to the DC-IN jack on the left of the unit.

One point of improvement that I would like to see is a version that suits subnotebook / ultraportable computers and is big enough for them, without sacrificing the build quality and quiet operation.

As well, Cooler Master could provide an external power supply kit as an option for the NotePal Infinite Evo units so they can work as a self-powered USB hub when used with USB hard disks or as a charging bar for mobile phones.

I would recommend that people who find that their laptop computer runs hot too easily during games or graphics-intensive work should purchase the Cooler Master NotePal Infinite Evo cooling pad. It does the job without intruding on one’s computing life and is designed to last a long time. As well you don’t lose the functionality of the USB socket it is connected to.

USB-C PD battery packs–are they worth it for your laptop?