I am reviewing the new HP Photosmart 7510 multifunction inkjet printer which is the top-end model of the new Photosmart lineup. It has been redesigned in a manner to make it more suitable for home use with an emphasis on it being in the living areas of the house. Of course, it will have the printing, scanning and copying abilities and is a citizen product of the Internet-edged home network with HP’s ePrint email-to-print and Apple’s iOS AirPrint functionality.

By the way, it is also worth noting that Officeworks does sell a pack of black, cyan, magenta and yellow high-capacity cartridges for AUD$110 at the time of publication.

The HP Photosmart 7510 is finished in that very dark brown colour which may be described as either “antique brown” or “coffee brown”. This is part of the new “earthy-brown” colour trend for interior design but the colour would allow the printer to blend in well with living areas that are replete with the antique or classic wooden furniture.

Unlike the typical inkjet printer, this multifunction printer is set on a base that extends to the length of what would be the typical A4 paper tray on these printers. The front of the plinth drops down smoothly just by you lifting a perspex lid in the area where documents would land when they are printed. There is another part of that lid which exposes the photo-paper tray for when you turn out snapshot photos. This may limit its ability to be positioned on the top of narrow furnture but would make it look the part on that desk, sideboard or large upright piano.

Part of being the top-end model of the Photosmart home inkjet printer series, the Photosmart 7510 is equipped with a low-profile automatic document feeder that would come in handy with scanning or copying documents. US-supplied models have access to the eFax service which allows for Internet-driven “virtual fax machine” functionality. 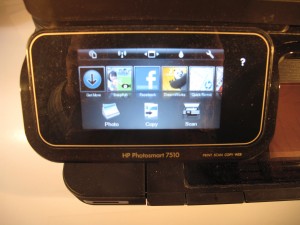 As part of the recent trend for HP Photosmart and OfficeJet printers, you control the Photosmart 7510 using a touchscreen. This improves the useability of these printers through the setup phase and when you want to do any printing or copy jobs at the printer.

Like all the other recent Photosmart printers that I have reviewed, this printer uses the 564 and 564XL ink cartridges. This means that you have the benefit of the multi-cartridge colour printing that they offer, thus making them economical to run.

Similarly, the Photosmart printer doesn’t support IPv6 connectivity, which is a common amongst network equipment targeted at the home user. This is even as IPv6 is becoming more relevant with the home network especially with next-generation broadband services. On the other hand, this printer does work as a UPnP-compliant printing device, a feature that should be exploited with digital cameras and interactive-TV applications.

Other than that, this printer makes the setup very easy, through the use of animations to show you through preparation procedures.

This HP printer supports the full gamut of HP ePrint functions like email-to-print and printer apps. It can also work with the AirPrint mobile-print setup for Apple iOS devices.

There is the option to preview your original on the control panel screen when you scan or copy from the scanning platen. You can’t do this for documents scanned from the automatic document feeder. Other than that, it doesn’t have copying functions that business would find handy like ID copy. 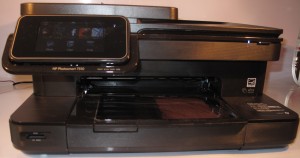 Like other multifunction printers, this printer has a camera-card slot on the front of its plinth so you can print from your digital camera’s card or scan documents to a memory card.

When it came to installing the printer’s software, I didn’t have any trouble with this. Even having to move the printer from USB to Wi-Fi operation was a relatively smooth operation.

The driver software doesn’t take up much memory space or processor time thus not impairing the computer’s performance. Even the scan monitor had behaved very consistently, accepting jobs that were started from the printer’s control surface and turning them out without “taking over” the computer. This was infact a more reliable experience than what I have had with previous HP software.

There is significantly reduced noise level from the HP Photosmart 7510 during a print job compared to earlier Photosmart printers,with no distinct noise from printhead marking the paper. This is more so when turning out regular documents. But the printhead noise may be noticeable during photo printing. 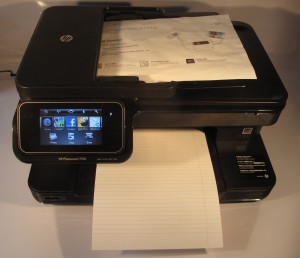 There have been some improvements on the automatic-duplexing front. The time that it takes to “flip” the page to print on the other side has been reduced to around 5 seconds, thus making a reduction in the time penalty for printing both sides. But, like with other HP inkjet printers with this feature, the Photosmart still requires a margin at the top and bottom of the page for this function to work.

The text and graphics on regular documents is very sharp, more on a par with the other Photosmart predecessors. As for photographis, they come out with a slightly dark image with reduced contrast. Some colours like the reds stand out more but blues are not all that strong. As well, you don’t have the vivid flesh tones.

One omission that I have about the Photosmart 7510 is that it could have a walk-up USB socket on the front for printing from PictBridge-capable cameras, USB memory keys and card readers for future card formats. It could also benefit from an Ethernet socket on the back so it can work with other network technologies like HomePlug.

As for the auto-duplex functionality, HP should look at the issue of having its Photosmart and OfficeJet inkjet printers be able to print “to the edge” of the paper when printing both sides. This would make the function not just as a “green” function but more so as a desktop-publishing aid when it comes to printing documents where alignment on both sides is critical.

I would recommend the HP Photosmart 7510 printer as a household printer for a busy household, especially if there are many guests coming through; including the previously-mentioned “family house” scenario. This is due to using the efficient five-cartridge printing mechanism which allows you to buy the colours that you need. It would work well as a SOHO printer for those of us who don’t rely on fax technology and fit in  with those houses where there is high value being placed on aesthetics; especially if there is a lot of that antique furniture in place.