Previously I reviewed the first of the HP Envy laptop computers which was a 15” “thin-and-light” that abounded in luxury. It was launched around the time that Windows-based computers started to match up or overtake the Apple Macintosh computers in the way they performed and looked. This one was styled in a bronze finish with a perforated filligree pattern across the top of the lid and on the keyboard.

Now I am reviewing one of the latest iterations of this top-shelf range, known as the HP Envy 15 “3000 Series”. This unit, like the rest of the current high-end HP lineup has the dark-black lid with a glowing HP logo. But, when you open it up, it appears to look like the Apple MacBook Pro lineup in many ways with the aluminium keyboard surround and the black keyboard and display escutcheon. It is an example of a trend that is besetting the 15” multimedia laptop class as manufacturers try to cut in to the MacBook Pro’s market dominated by the creative industries. 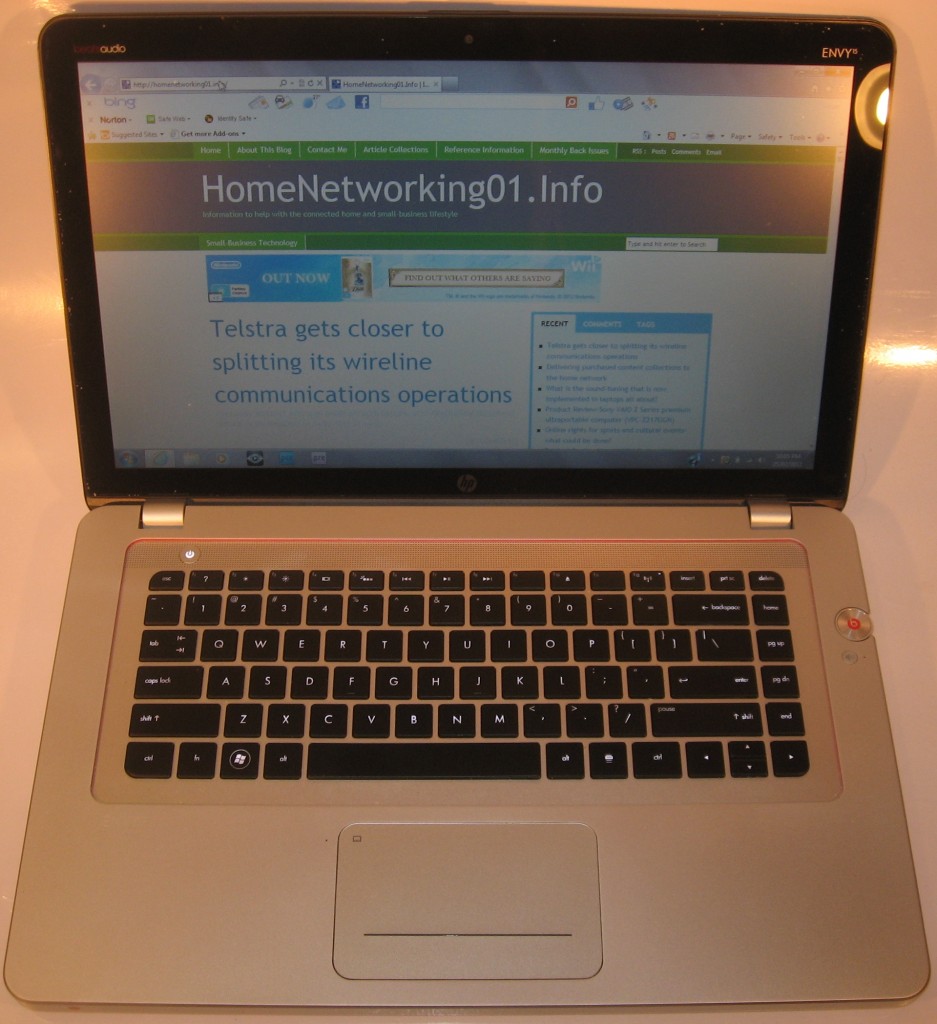 The HP Envy 15 3000 laptop has aesthetics that reflect a recent-issue Apple Macbook Pro, especially when you open it up. This is with the screen having a black escutcheon and the keyboard surround being made of natural anodised aluminium and the keyboard being a black illuminated kind. This aluminium surround, which also feels cool to the touch rather than sweaty, also reminds me of its use on a large range of classy hi-fi equipment especially most of the B&O equipment since the 1970s..

Of course, the back of the lid is finished in a satin black finished with a small HP logo that reflects when the computer is off and glows like the Apple logo when it is on, like the HP Pavilion DV7-6013TX that I previously reviewed. This styling is much more discreet than the distinct Apple logo that the MacBook Pro uses, but this could be augmented further with an “Envy” logo which identifies it as being part of the high-end Envy range. It also reinforces the fact that the computer feels very well-built and durable.

I have noticed no overheating from this laptop compared to the previous Envy model. This is probably due to the use of a larger more-standard shell that is typical for a 15” standard laptop than the previous effort of creating a 15” “thin-and-light” notebook which is a breeding ground for this problem. But there is still a constant fan noise that occurs when the computer is in full use.

This keyboard reminds you of the MacBook Pro

The black illuminated keyboard has a rough-textured feel that reminds you of using a “rubberised” keyboard. Unlike most other laptops of this size, this unit doesn’t have a numeric keypad but you can still type very quickly and accurately on it. The illuminated effect is augmented by a “waterfall” effect which happens whenever the keyboard lights up and this can be triggered by a proximity sensor that “wakes” the Envy up when a user comes near.

The trackpad is a recessed smooth aluminium area with marked off area for selection buttons which can be deliberately pressed down. This is in a similar manner to what happens for the MacBook Pro’s trackpad although you deliberately press down anywhere on that trackpad to “click” your selection and is exploiting the single-button mouse that is part of the MacOS’s operation.

The keyboard and trackpard are augmented with an aluminium on-off button above the keyboard and a thumbwheel that provides ready access to the sound volume control. This is infact a much more desirable function because you can quickly turn the sound up or down as you require in the manner that most of us have liked where we use a knob or thumbwheel to adjust the sound. But it can be temperamental and choose not to adjust the sound level when you need to adjust it.

The HP Envy 15 3000 Series is another of the HP range that has had its sound tuned by Dr. Dre’s Beats Audio. This sound tuning and multi-speaker setup has paid off in improving the sound quality of the integrated speakers.  You benefit from a sound experience that has a sense of presence across the frequency range, in a similar way to how the larger portable radios and cassette recorders which use the orthodox 3”-4” cone speaker in their larger housings sound. You will not really expect the full beefy bass sound out of this laptop unless you have it hooked up to speakers that put out the full range. This is still because the small speakers are all packed inside the main chassis with the keyboard, battery, computer circuitry and secondary storage. Here, HP could spread the speakers around such as mounting some of them next to the screen for example.

Once I connected a set of B&O Form 2 headphones to this laptop, the sound had that full punch and the equalisation circuitry was effective. This can be of benefit if the Envy 15 was used alongside a speaker system that doesn’t provide full control or with a pair of good headphones. The BeatsAudio Control Panel effectively bypassed the bass response and equalisation for the headphones and another device I was using as an external amplifier in order to yield a “flat” sound but the “punchiness” was there while the BeatsAudio functionality was engaged.

This is another of the laptops that implement a dual-graphics setup with AMD Radeon HD 7670M as the performance option. Like the other AMD-based dual-graphics laptops that I have reviewed, the AMD software allows you to choose which graphics mode the computer will run in when you run particular software. This will make it easer to prefer higher-performance operation for the programs that need it like the games or graphics-editing tools, yet use the integrated graphics with the power-saving benefits for regular office applications. 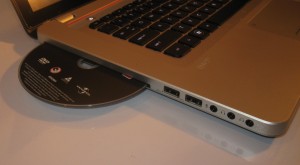 Thankfully the screen isn’t finished with that glossy reflective plastic and it makes for an easy-to-read display. It will also be of benefit if you choose to dim the display to conserve battery power on this laptop.

The HP Envy 15 3000 Series is equipped with a slot-load DVD burner but a machine of its price could benefit from an optical drive that could handle Blu-Ray discs. This feature could be positioned on at least the more-expensive high-end offering that is equipped with the higher-capacity hard disk and Full-HD (1920×1080) screen.

An important fact about the Envy 15 3000 Series is that it is the first laptop that I have reviewed to be equipped with a Mini DIsplayPort connector. More so, this connector is provided in lieu of a VGA socket and if you had to use this laptop with that economy data projector or a cheaper external monitor, you would need to use a DisplayPort-VGA adaptor module or a DisplayLink-enabled USB-VGA module. Otherwise, it has the expected connections for a 15” premium multimedia laptop.

For network connectivity, the Envy 15 has the 802.11g/n wireless and Gigabit Ethernet. But this could benefit from 802.11a/g/n dual-band Wi-Fi networking so as to work with higher-performance networks that use the 5GHz band.

I had noticed that the HP Envy 15 3000 Series yielded 18% of battery power remaining after running the computer on effectively several hours of mixed activities ranging from  data transfer like PDF downloads and system  updates as well as playing  multimedia content from the Internet and DVD . But this computer was able to continuously play a DVD feature for 4 hours, 19 minutes with Wi-Fi engaged, bit it was assessed with the use of the integrated graphics rather than the AMD graphics chipset. Of course most users may want to make use of the discrete graphics only while the computer is on AC power.

This performance is very much on a par with the recent bunch of 15” laptops that I have tested for this site.

Experience with other people

I showed this computer to a visiting friend whom I knew owns one of the newer Apple MacBook Pro computers and he said that it was a “spitting image” of that computer. He noticed that the keyboard area made him think of that Apple computer that he owns rather than any other computer.

One improvement that I would like to see for the HP Envy 15 3000 Series would be that the premium model come with an optical drive that can at least play Blu-Ray discs rather than just a DVD burner. This would complement the 1920×1080 display that it offers and make it also an up-to-date multimedia laptop.

As well,  HP could make sure that the volume thumbwheel works properly with the Windows main volume control. This could be through mapping the thumbwheel directly with the operating system’s class drivers and function list rather than writing software to achieve that goal. What I see is that a lot of the problems with advanced functionality is that manufacturers tend to “reinvent the wheel” when it comes to providing the necessary software link to the functionality rather than taking advantage of the operating system’s software support and extending that with modules that hook to the OS’s application-programming interface.

The computer could also benefit from a line-in socket so it can work easily with hi-fi systems, tape / MD decks and the like for capturing audio from these sources to the hard disk. This could be available through a USB external sound module that HP could sell as an “official accessory” for the Envy computer lineup. On the other hand, HP could implement high-quality discrete sound-card circuitry like Creative Labs circuitry to raise the bar above everyone else when it comes to sound reproduction. This can also help HP tackle the PC-based DJ market and snap at Apple’s heels more effectively.

Another accessory idea that I would like to see for HP BeatsAudio computers would be a speaker set that implements this sound tuning so that the BeatsAudio advantage can be taken further for a punchy bass line. 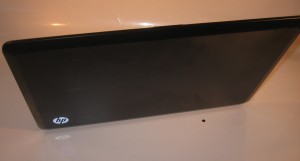 I would recommend this computer for two main user classes. The first one would be a person who wants a graphics and multimedia workhorse in the standard 15” laptop form factor while staying with the Windows platform. This is more so if you want to demonstrate that the Windows platform is as good at these tasks as the Apple Macintosh platform.

The second user class are those people who are moving from the Apple Macintosh platform to the Windows platform and want a computer that maintains a similar look and build quality to their previous MacBook Pro unit  It can also mean that HP is doing its best to position the Envy computer range in the “Super Cool” fridge on personal-computing’s “Cool Wall”. It may also be interesting to see whether this computer will appear on the coffee bars at the Wi-Fi-equipped trendy inner-urban cafes.

This is another Envy to definitely Envy!