I am reviewing the Braven Mira which is a small single-piece portable Bluetooth speaker that is designed for use in the bathroom or kitchen. This circular speaker is designed to be water resistant so it can be used in the shower or near the sink and has a kickstand that can double as a hook to hang over the showerhead or something similar. 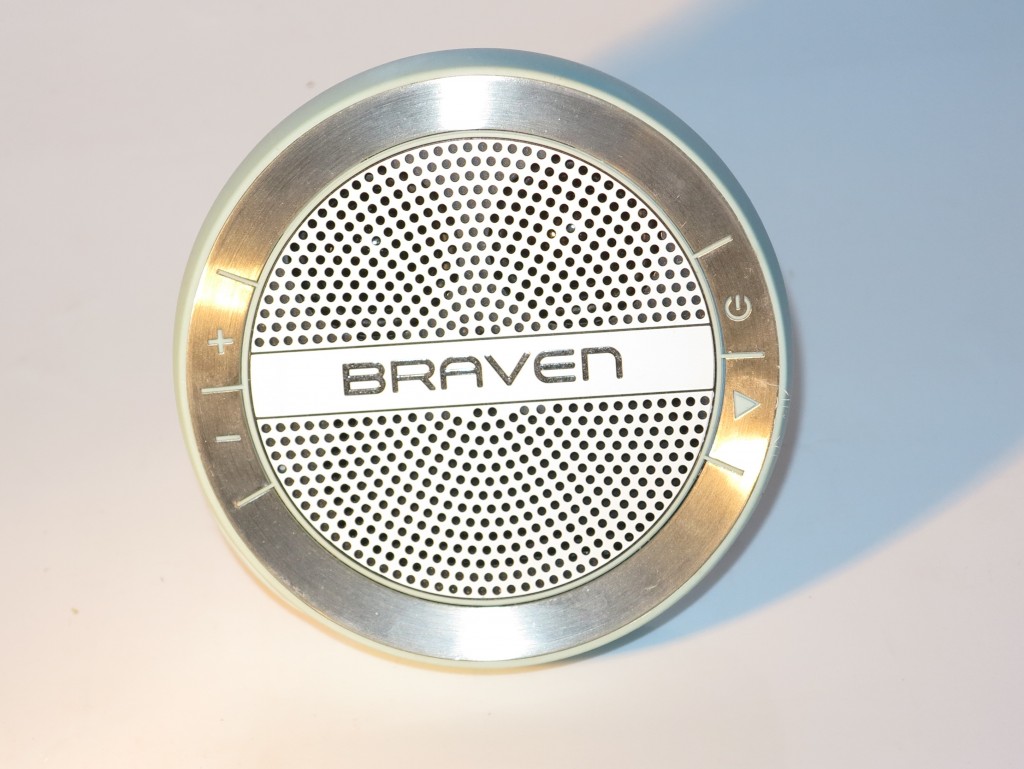 The Braven Mira is a circular portable Bluetooth speaker pitched for use in the bathroom, kitchen, laundry or pool area. This is due to it being water-resistant to IPx5 standards which means that it can survive water splashes or rainfall. But you have to make sure nothing is plugged in to it and that the cap covering the sockets on the side is closed properly.

The C-shape kickstand that doubles as a hook

It also has a C-shaped kickstand that allows it to become a hook so you can hang it on a shower head, a tap (faucet) or door knob. This allows for versatile positioning options that suit your needs perfectly.

Like other Braven Bluetooth speakers, the Mira has four main operating controls with two that double as volume / track navigation controls. To make the speaker discoverable for pairing, you have to hold the PLAY button until the speaker makes a repeated beep tone. It doesn’t support NFC “touch-and-go” paring for “open-frame” (Android and Windows) personal-computing devices.

A feature that is very common on this class of speaker is that the Braven Mira can serve as a speakerphone for whenever you want to talk hands-free on the phone or engage in a videocall.

I have used the speaker with my phone and when I have run it at the maximum level, it sounds very similar to a small radio. You wouldn’t expect high-quality sound from a speaker like this one or any of its peers but it is loud enough to fill a small room.

Personally, I would like to see Braven add two extra buttons to the Mira for track selection rather than you holding down the volume buttons to change tracks. This can avoid operational mistakes when you skip a song when you intend to turn it down. As well, the controls could be embossed more distinctively so you can identify them at a touch especially if you are having to contend with shampoo in your eyes.

Like with some of their other Bluetooth speaker products, Braven could offer variants that have an integrated broadcast-radio tuner so they can serve as ordinary portable radios.

I would still see the Braven Mira earn its keep as a multipurpose utility speaker that you can use with your phone, tablet or 2-in-1 especially if these devices don’t put up much in the way of sound output for your needs.