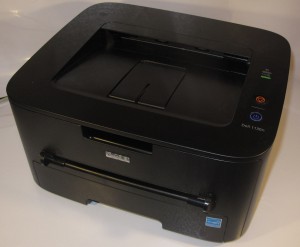 You may find that you cannot use your printer or multifunction from your computer via the network yet find that it can perform standalone tasks such as copying and faxing for example. It is even though the printer used to print from the computer via the same network connection just before the problem surfaced.

This is a situation I have ran in to myself with my computer and my inkjet multifunction printer on many occasions. But I have also assisted a small company whom I deal with regularly that faced similar problems with two of their colour laser printers that are connected to their business’s network.

There are two main problems that can cause you not to print to your network printer even though you could previously print to the same machine.

If the fault occurs with one particular computer rather than all computers and devices that use the same printer driver software, the driver software or its configuration may be balky.

This may happen if you have continuously added and removed many printers from the same computer, something I have encountered as I install and remove many different review-sample printers from my desktop PC through the course of adding content to this Website.

Check and reinstall the driver software

In some cases, this problem can be caused by faulty driver software and you may have to download the latest driver software from the manufacturer’s Website. It is infact a process I encourage people to do when installing new hardware because the software supplied on the CD in the device’s carton may he “rushed out” in a bid to get the device to market quickly.

Check the state of the operating system’s print functionality

Similarly, it may be worth rebooting the computer because the print spooler (the software that manages the printing function) in the operating system may have stalled. On the other hand, you may have to manually start the print spooler. In Windows 7, this would be found by searching for “Services” in the Start Menu’s Search option, whereupon you look in the list for “Print Spooler” and make sure that’s started.

If this happens with all of the computers in the network, it may be due to the printer itself losing connection with the network. This may also affect other network functions like IP-based faxing, HP ePrint or other Web-based features.

Check for faults with the network

Check for obvious faults with the network connection like faulty Ethernet leads, infrastructure equipment like a router, switch or HomePlug bridge turned off or not functioning or, in the case of Wi-Fi setups, the quality of the wireless signal.

In some cases, you may have to turn the network-infrastructure device off at the AC power for a few seconds because it may have “frozen” due to something like a power surge. Use the network-status option on the printer’s control panel menu to check that it can “see” the network after you check these factors.

Once you know how to tackle these printer problems, you may then be able to see longer service life from your equipment.