I am reviewing the Canon PIXMA MG-6150 multifunction inkjet printer which is positioned as the top inkjet multifunction in Canon’s lineup that isn’t equipped with fax functionality. 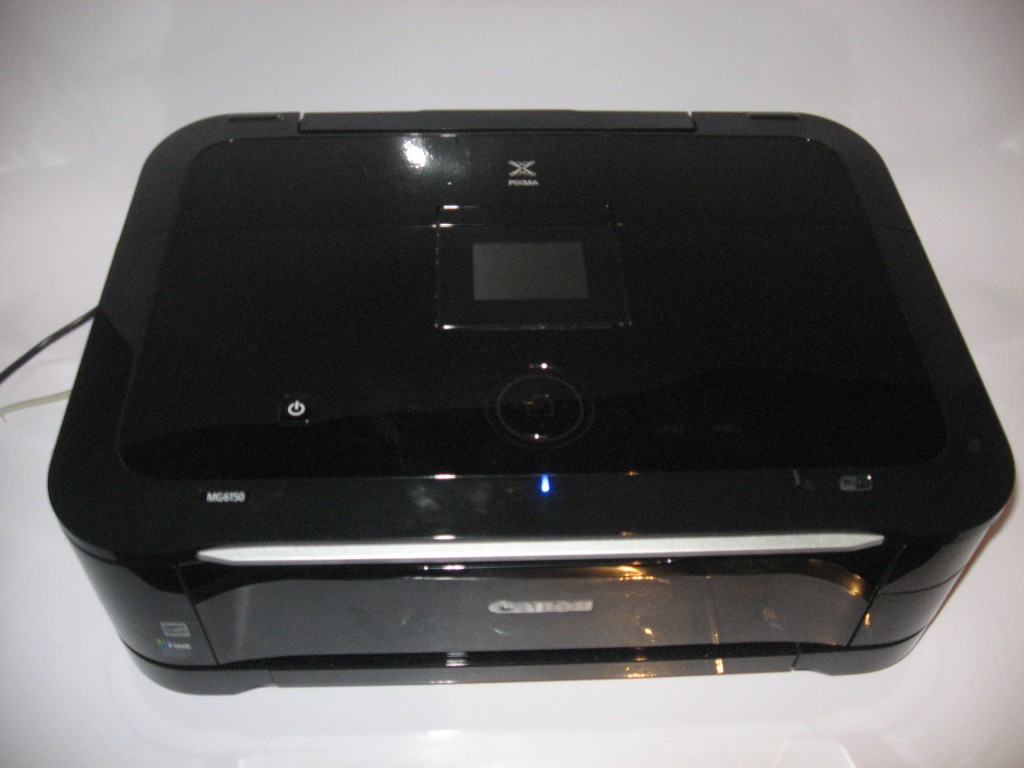 This machine comes in a piano-black finish and has the user-interface LCD lying flat with the top of the lid. But when you turn it on, the LCD screen lights up and various touch buttons light up in a manner that isn’t dissimilar to either the way a pinball machine or the dial panel on a mid-1970s stereo receiver lights up.

As you use the printer in its various operating modes, some of the buttons light up as required. These buttons are actually touch-panel buttons which will make you think somewhat of operating some of the mid-1980s B&O hi-fi equipment, especially the Beogram CDX CD player which had this similar kind of touch panel. As well, the main display is able to come up at an angle by pushing on a button located behind the display. 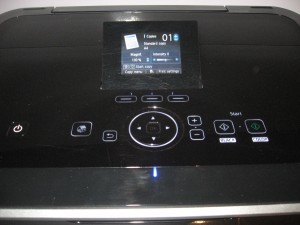 The display can come up at an angle 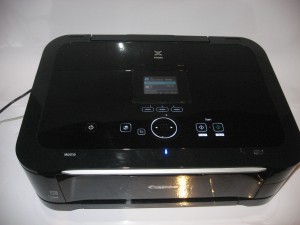 The printer lit up in operation mode

The printer has various “walk-up” functions like copying and printing from camera cards. As well, it can print from cameras using PictBridge, which I have used to print “proof-prints” of the pictures that I took for this review. It can even print PDF documents from USB memory sticks. But its handling of this function can be very fussy at times, especially if you use a PDF prepared by a desktop-publishing program.

As well, there is the ability to create your own stationery like notepaper, graph paper and music manuscript paper. For this latter paper type, you can turn out 12-stave pages which is a lot more flexible for most music tasks like “vocal and piano”, organ or “four-part harmony” music.

The software that is supplied on the CD-ROM can be very tricky to load and can think that there isn’t the printer available. But I have visited Canon’s Website and downloaded the latest version of the software and this has loaded properly and discovered the printer as it should.

The device-initiated scan-to-PC software leave a lot to be desired. The user interface looks very pale and confusing and you can only allocate one path for device-initiated scan jobs. This would be to place the files in a particular folder on the host computer or to attach them to an email in Outlook. As well, it doesn’t support other email clients for scan-to-email. You can determine how the document should be scanned from the printer but there are two forms already set – A4 document to PDF or 4×6 snapshot to JPEG. 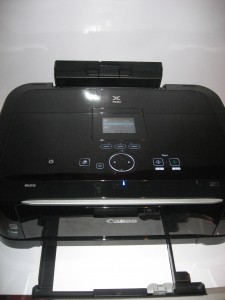 The paper handling is very similar to some of the other high-end A4-capable PIXMA printers like the direct-connect MP-610 and the fax-enabled network-connectable MX-870 that I previously reviewed on this site. Here, the printer has a front-loadable tray for A4 plain paper as well as the standard rear-mount paper feed tray. This means that you can keep a reserve of ordinary paper on hand in the printer yet use the back path for glossy paper and other special media.

Also, these printers have a fabulous auto-duplex function that has very little registration problems for double-sided documents and can work “to the edge” as far as margins go. This would put the double-sided printing function beyond satisfying the need to avoid wast and in to a league where you can work on both sides for your desktop-publishing needs.

The printer is very reliably as far as the mechanism is concerned and could handle large print jobs very easily.

Its document-printing quality is what you would expect for a high-end consumer inkjet unit. When it prints photos, the pictures come out strong on saturation but do lack a bit of definition. 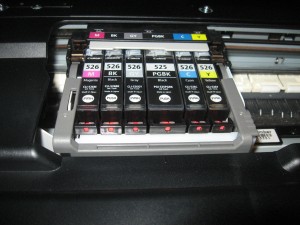 6 ink tanks in this printer

This is even though it uses a six-colour ink system whereas most inkjets that I have reviewed use either four colours or five colours if they are “photo-rated”. Sometimes it may be true that the number of colours in a photo-rated inkjet may not yield particular improvements.

The printer could benefit from an improved scan-to-PC program which gives the user greater choice on how the image should be handled. As well, it could support the ability to define more than one path for scan-to-PC jobs initiated from the control panel.

As well, Canon could supply high-capacity cartridges for these printers as an extra-cost option so that users are covered if they have a huge run of print jobs from the printer.

I would recommend this printer as being on my shortlist of printers worth deploying as a home-office or secondary-use (study) multifunction printer for the home if you don’t value faxing or email-to-print.