I have previously reviewed the Acer Aspire S3 Ultrabook in order to assess what an Ultrabook was capable of as a secondary content-creating ultraportable computer. Now I have the chance to review the Toshiba Z830 Series Ultrabooks. The representative unit that I am reviewing is the Satellite Z830 which is a model that is available through consumer-retail outlets.

But there is the Portege Z830 variants which are sold to the business market through value-added resellers and independent computer dealers targeting business users and is similar to this unit except for having different specification options like fingerprint scanners and higher-performance processors. I will be putting these specific options in the specifications table as “Portege options”.

Compared to the Acer Aspire S3 Series, these units offer some more functionality in the form of extra connections not normally seen on the typical Ultrabook.

The Toshiba Satellite Z80 is finished in an all-plastic gunmetal-grey case which could benefit from a metal finish around the palmrest. Here, the plastic can feel very sweaty especially after a long period of use.

I had not noticed any overheating with this Ultrabook through my use of this machine. This is although it has a similar cooling arrangement to the Acer Aspire S3 that I previously reviewed.

The Toshiba Satellite Z830 is equipped with an illuminated chiclet keyboard which allows for full touch-typing. It could benefit from having the home keys with a more distinct feel so you can discover your home position by feel or could be equipped with a rubberised keyboard.

It has the same very-sensitive Toshiba trackpad which can be defeated using a button located under the spacebar when you are doing a lot of typing. The trackpad is easy to discover by touch as are the chrome-effect selection buttons.

The video display on the Toshiba Satellite Z830 Ultrabook was responsive even with video playback content as I watched some “catch-up TV” off one of the TV channels’ Websites. This would be adequate for basic multimedia tasks such as video playback or photo management as well as non-demanding gameplay.

Of course, like a lot of laptops, the sound through the internal speakers leaves a lot to be desired. This is due to the small speakers packed in to the computer and I would recommend use of headphones or an external speaker setup if you want more volume or better sound quality out of this laptop.

One area where the Toshiba Z830 Ultrabooks, both the Satellite and Portege variants, excels in is the connectivity options that are beyond what is available for this laptop product class.

The video outputs come in the form of VGA as well as HDMI. This would please those of us who have to use most affordable data projectors that have the VGA connections as their only video input for computer equipment. As well, there are three USB ports – 2 USB 2.0 connections with one supporting Sleep & Charge as well as a USB 3.0 port for those external hard disks. The audio connections have been augmented with an audio-input jack for a microphone. 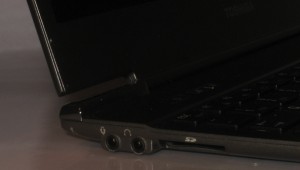 Unlike most Ultrabooks, the Toshiba Z830 Series also comes with a Gigabit Ethernet socket so you can connect it directly to a network where there is no Wi-Fi connectivity available. This also means that you could even use this Ultrabook with a HomePlug network using the typical HomePlug-Ethernet bridge adaptor.

It also is equipped with a Kensington-compliant locking slot so you can use one of those laptop locking cables to stop thieves taking advantage of this notebook’s lightweight design to make off with it; and is a feature that must be part of any Ultrabook. But this is located too close to the USB 3.0 socket on the right had side therefore you wouldn’t be able to connect anything to it if you have the laptop locked down.

Right-hand side detail with USB 3.0 socket and Kensington-compatible lock slot

The Toshiba Z830 Series can complete at least a day of mixed tasks on battery power without it needing to be charged. The only problem is that after a few days of disuse which will often happen with this class of computers when you are at home, using the primary computer, the battery loses its charge completely and you have to charge the Ultrabook up.

One major area where Toshiba could improve the Z830 Series would be to provide higher-capacity hard disks or solid-state drives as options in the Satellite and Portege model lineups. This could then please those users who want to use these Ultrabooks to store a quantity of photos or video footage they have taken themselves or to store a handful of movies to view on the long air trip. 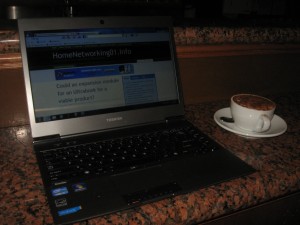 I would recommend any of the Toshiba Z830 Series Ultrabooks as a lightweight secondary computer for those of us who value connectivity. This is more so if  the areas one is using are not likely to have Wi-Fi or there is an intent to show video material and PowerPoint presentations through those economy data projectors. The USB 3.0 socket can allow to use a high-capacity external hard disk  without losing on data throughput and is what I would recommend if you do a lot of digital photography and review your work on these Ultrabooks.

But I would specifically recommend the Portege variants if you are doing high-risk or high-value business work with these Ultrabooks. This also encompasses journalists who are working on highly-controversial content.