I have written this article as an updated version to the one I originally published. This is because of newer activity on the UPnP AV / DLNA front and newer situations that this technology has been exposed to.

If anyone is wanting to question me why my editorial slant in HomeNetworking01.info is geared towards UPnP-based network management standards, especially the UPnP AV / DLNA Home Media Network standards, I am writing this piece to state what I am about.

I am not a spokesman for UPnP or DLNA or any of the companies that are behind these standards. But, as an author and editor of this site, I do place a high value on networks, network hardware and network media software supporting any of the UPnP AV / DLNA Home Media Network Standards.

Ability to work across nearly all networks

One of the main reasons I value these standards is that they work across any IP-standard subnet (logical network) and allow the hardware manufacturers and software developers to integrate the home media network in to their creations without reinventing the wheel.

A simplified setup and media-discovery experience for the user

For the user or system installer, due to the nature of UPnP, they doesn’t need to “run backwards and forwards” between devices to make sure devices are pointing to the correct network shares and that usernames and passwords are correct on both the client device and the server. This can become more of a headache when setting up devices that don’t have the full QWERTY keyboard on them and require the user to use “SMS-style” or “pick-n-choose” text entry which can increase room for user frustration and mistakes. They also make the establishment of these multimedia networks as idiot-proof as possible, which would benefit home and small-business users where there isn’t a dedicated IT team available.

There is even the ability with DLNA networks where new DLNA servers are exposed to the client devices the moment they become available. This feature makes it easier to “get going” with the material that is hosted on these servers.

Fostering innovation in a common-sense way

I also agree that a standards-based IT environment like UPnP AV / DLNA, supported by many different technology vendors, is a breeding ground for hardware and software innovation. This also encourages a “common-sense” approach to technology as outlined below. Here, it can also lead to these concepts being implemented in the most cost-effective manner, which makes the device affordable for most people, while there is the ability for manufacturers to provide the premium-grade equipment that works in the same ecosystem.

This has led to hardware that is compliant with this standard becoming increasingly ubiquitous; as well as top-shelf audio-equipment manufacturers of respect turning out the high-grade hi-fi equipment capable of playing music provisioned over a home network.

I know that Windows supports the standard through Windows Media Player 10 and has full “three-box” implementation in Windows Media Player 12 which is part of Windows 7. As well, I have noted that the open-source community have developed servers and similar software that can work with a Linux system. This feature is now considered “par for the course” for nearly all consumer and small-business network-attached storage units.

As well, the Microsoft XBox360 and the Sony PS3, which are considered “must-haves” as far as games consoles are concerned, have inherent support for this technology. Similarly, the big-name Japanese and South-Korean consumer-electronics companies like Samsung, Sony and Panasonic are implementing DLNA in most of their consumer video equipment, save for the low-end models. Most of the big-time electronics manufacturers who have a line-up of home-theatre receivers have this feature in at least the high-end models, with some manufacturers pushing the feature in to the mid-range models. As well, nearly all Internet radios can play audio material held on DLNA-based media servers.

Similarly, most consumer-electronics equipment manufacturers are starting to sell speaker docks and similar equipment that are not just designed to work with the Apple iPhone. This has been brought on by the popularity of the tablet computer and the highly-capable Android smartphones. Cheaper variants would have a Bluetooth A2DP setup as well as the iPhone dock while more expensive variants that connect to home networks would have support for both the Apple AirPlay and DLNA MediaRenderer operating modes. A handful of these units even support WiFi Direct so as to create their own wireless-network segment for that tablet or smartphone/ 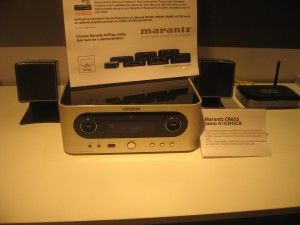 The Australian Audio and AV Show 2011 which was held at the Melbourne Marriott Hotel was an event that underscored what DLNA was all about for high-grade network audio distribution. Some of the hotel rooms which were purposed as showrooms for the hi-fi equipment distributors had live DLNA Home Media Networks based around a common Wi-Fi router that was the hub of the network, a small NAS holding the music and one or two network-enabled hi-fi components playing out the music. Here, these networks were used to demonstrate the concept of network-distributed file-based audio being a real concept for the premium hi-fi environment.

DLNA can work beyond the home

Some of us may think that the UPnP AV / DLNA technology can only work within the home but there is the potential to allow it to work beyond content in the home. This arrangement can allow the ability to create and maintain a network-based distributed AV system in the business, hospitality or other environment using cost-effective easily-available equipment that is suited for the job at hand. 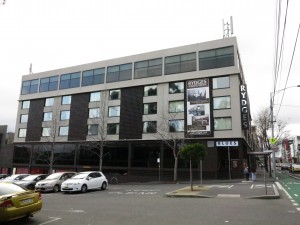 The network setups at the previously-mentioned home entertainment show which was hosted at the previously-mentioned business hotel, had even led me to write up this article about the feasibility of implementing DLNA technology in the hotel room because of the fact that most of us would be bringing in phones, tablets and laptops which have this function in a server or other role. I was coming at this issue on a “network-only” angle so as to move away from the use of highly-expensive specialist set-top boxes or TV sets targeted at this industry but towards a large range of cost-effective equipment with increased flexibility. This doesn’t just mean televisions and video peripherals like Blu-Ray players but also encompasses music systems or home-theatre systems which could earn their keep in those “top-shelf” suites or apartments.

This concept encompasses not just media held on a guest’s devices but multimedia applications that this industry values like in-room pay-per-view movies, line-level feeds for conferences and cabarets or even implementing DLNA as an IP-driven alternative to distributing satellite TV via coaxial cable run through the property. 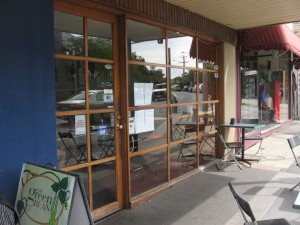 A cafe who can benefit from DLNA network AV technology

It also runs alongside the idea of using this technology to provide multimedia in the business using the data network that exists there but using cost-effective and highly-available equipment. This is something you can do with a Windows-based computer running Windows Media Player or you could use low-cost DLNA software that can work as a server or control point.

One key application is to purpose a DLNA-compliant “smart TV” or a TV set / projector that is connected to something like the Sony BDP-S390 as cost-effective “digital signage”. This is where you create the signs and visual material using Photoshop, PowerPoint or other graphics and presentation software then “push” the material using Windows “Play To” or TwonkyManager to the cost-effective equipment for display.

Similarly, the DLNA technology is being considered as an alternative to the classic set-top-box model for multichannel pay-TV setups. For example, it is being considered as an idea for a “gateway” device to be installed in the home which works as a PVR or “broadcast-LAN” tuner. This box could be a “headless” box which isn’t connected to any screen or could be a traditional set-top box serving the main household TV with content.

Here, multiple DLNA-enabled TVs, video peripherals or viewer applications can tune in to pay-TV channels or content held on the PVR without the need to install a set-top box on each TV. It also allows for the customer to have equipment of different capabilities such as a DLNA-capable Blu-Ray player attached to a small entry-level TV in the master bedroom having access to the same content as what would be available on the big TV in the main lounge area. It is infact something that is being pushed by consumer-electronics vendors in the USA as a standards-compliant way of delivering cable TV.

This application and the above-mentioned hotel-room application can now benefit from a super-standard called RVU. This integrates DLNA and a “remote-desktop” standard like VNC or Microsoft’s “Terminal Services / RDP” in order to provide a consistent branded user interface for advanced pay-TV services like movies-on-demand or account management.

So the main reason I place a lot of value in the UPnP AV / DLNA Home Media Network is because of the ease that there is in establishing a heterogeneous multimedia network with innovative easy-to-set-up products that suit what you want to do.