This is an update of the article originally published on 11 August 2008 and has been refreshed to encompass newer technologies and equipment features that wireless-network equipment have.

Many of you who have viewed this blog have been looking for information about extending the wireless segment of your home network. Typically it may be to cover a large house or to gain wireless coverage past a radio obstacle like thick brick or stone walls, foil-lined insulation or double-glazing which uses metal-based heat reflection techniques. Previously, I have mentioned about using this technique to mitigate microwave-oven interference on the 2.4GHz band which 802.11g works on.

Most wireless-network equipment manufacturers have released repeater devices that catch the existing wireless-network signal and expose it in to the new area. Some of these setups work on a vendor-specific manner or may work according to standard WDS bridging techniques. But they all require the use of equipment compatible with each other, usually equipment supplied by the same vendor.

Other companies have released “wireless range extenders” which create a new wireless-network segment using a new SSID but bridge it to the existing wireless segment. This can be a point of confusion as you have to determine the best SSID to connect to at your client equipment and you don’t necessarily get the full bandwidth from your home network in this newly-created segment.

The method that I am going to talk about here is the establishment of an “extended service set” comprising of multiple access points serving the same network and using the same SSID and security parameters. All the access points have to be connected to a common wired-network backbone which is part of the same logical network; and the access points must be working on the same technology – the same 802.11 variation and operating mode (G-only, N-only, mixed mode, etc).

This method can be performed with access points or wireless routers supplied by different vendors, thus permitting the use of equipment which is suited for the job at hand. It can allow for use of surplus routers simply as access points as long as they are configured correctly.

This setup won’t work properly across networks that are set up as multiple subnets or logical networks. An example of this may include extending a wireless network between two business premises across the street or corridor where they are served by separate Internet services. If you do want to link the two different premises across the street or corridor, you may have to make sure there is a wired or dedicated wireless backbone connecting both these locations before you set up this kind of network.

The diagram below shows what a small network should be like when running an extended service set. 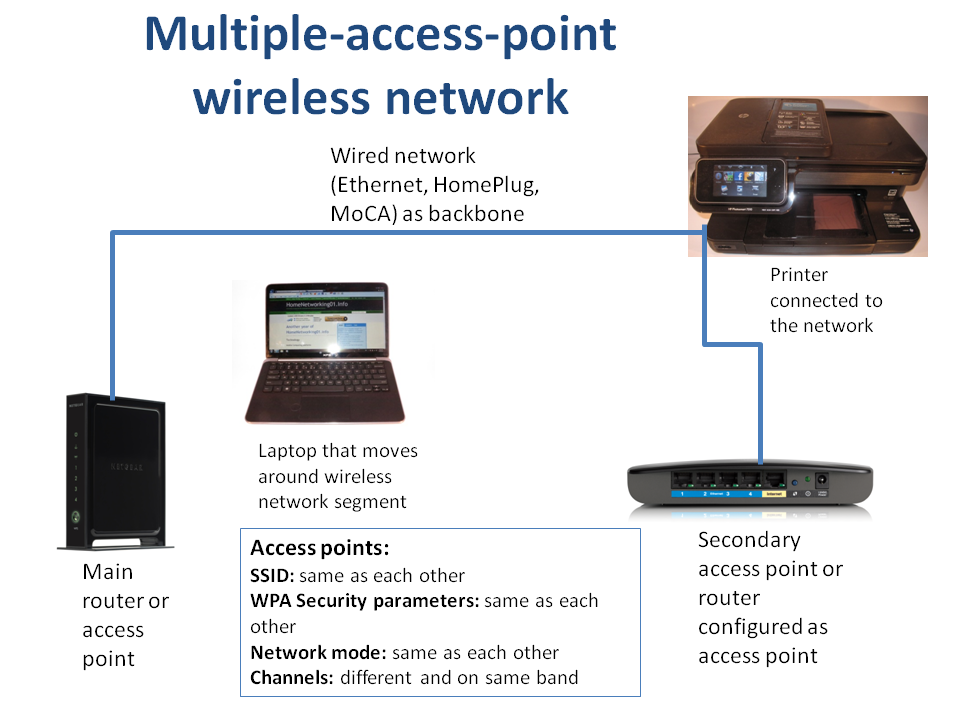 The wired-network backbone can work on any wired-network media such as a Cat5 Ethernet, HomePlug power-line, fibre-optic LAN, MoCA TV-aerial coax, HomePNA phone-line or a mix of these technologies bridged to each other. It can even work with a dedicated inter-building wireless backbone that may be used for larger properties or to join shops or offices that are separated by a street.

The network backbone can handle other network traffic from wired-network devices like servers, desktop computers and games consoles; and become the network’s local data path to the Internet. This is while it works as the backbone for the wireless “extended service set”.

You may have be lucky to have an Ethernet cable in your house if you had it “wired for data”. But most houses typically wouldn’t have this facility everywhere. The other technology that I have found to do this job equally well is HomePlug AV powerline networking which works over the cable infrastructure used to provide AC power to your lights and appliances. It can reach further than the existing building, which is a boon if you need to extend coverage to garages, sheds, cabins or other outbuildings or have Internet access in a caravan or campervan used as a “sleepout” or mobile office.

These devices are the transmitters that bring the data from the wired network backbone to the wireless client devices and make up the extended service set.

You typically will have one such device in the form of your wireless router which is at your network’s Internet-network “edge”. The wired-network backbone used as part of this “extended service set” would be connected to one of the LAN ports on this device. If you use a wireless router with one Ethernet port for the LAN and that port is used for a desktop computer or similar wired-network device, you will need to expand the number of sockets by using an Ethernet switch. These will typically be a “dime a dozen” for a five-port or eight-port unit. There are also some HomePlug-Ethernet bridges that have a built-in four-port switch that are worth considering if you are setting up a HomePlug backbone.

If you upgraded your wireless router to a newer model, you will still have your existing router gathering dust. Similarly, you may have changed broadband technologies like moving from cable to DSL or from DSL to a next-generation broadband technology and your router’s Internet connection may have been served by a technology-specific internal modem or connection.

This router that became surplus to your needs can work as an access point but will need to be configured appropriately.

Here, you will need to disable the following functions:

As well, you will need to set the LAN IP address to something that is within your network’s IP address range but preferably out of the address pool used by the current router. The reason you have to take care of this setup is because there needs to be only one device performing “network-Internet edge” functions such as DHCP in a network and this device should be the one at the logical network-Internet border.

Some of the newer routers that are sold through retail have an “access point mode” option in their setup Web page. This make the effort of setting them up to run purely as an access point a simpler task because it disables the DHCP, Dynamic DNS and other functions associated with an “edge” router at the click of an option.

When you connect this router to the wired backbone, you use any of the LAN ports to connect the backbone. Never use the WAN port on this router for the wired backbone. This may not be an issue if the router you are setting up is a modem-router where the modem is performing WAN functions or you are using a router that has the above-mentioned “access-point mode” and this mode makes the WAN port become a LAN port.

There is an increasing number of wireless access points that work with a HomePlug or Ethernet backbone. These devices, such as the Netcomm NP290W / Solwise PL-85PEW and the Devolo dLAN Wireless Extender, are as big as a compact “wall-wart” power adaptor used to power most electronic devices from the mains and plug directly in to the power outlet. They bridge between a Wi-Fi wireless segment (as an access point or wireless client bridge in some cases), a HomePlug powerline segment and a Cat5 Ethernet segment.

These units come in handy if you need to extend a wireless network on a temporary basis or simply if a compact device can do the job better than a large access point. They would come in to their own when you are using the extension access point to mitigate microwave-oven interference in the kitchen or if you want to extend the home network to a static caravan where the teenage kids can use that iPhone or iPad.

But with these devices, you have to make sure that you use one of the wired technologies as the backbone. This means that you have to use them with your HomePlug setgment as the backbone and the Ethernet connection to link a device like a desktop computer, PlayStation 3 or a network printer to the home network; or connect to an existing Ethernet backbone and have the device create a new HomePlug segment as well as working as an access point.

Setting Up The Network

You will need to know the SSID and the WEP or WPA wireless security parameters that are operational for your network. These are the only factors that need to be common amongst all of the access points of the network. The reason that the SSID and security parameters are set to the same details is so that wireless client devices can roam between the different access points without any user intervention.

The radio channels for each of the access points have to be set differently to each other. It is a good idea to set the access point closest to the kitchen to Channel 1 if you have a microwave oven in that kitchen. This is because, from my research, most of the domestic-market microwave ovens work at 2450 MHz which is between Channels 8 and 9 on the 802.11g channel list. I had tried an experiment to see whether a microwave can upset a wireless-network “cell” that is tuned away from its operating frequency.

If the access points or wireless routers is a consumer model that was made in the last few years, they would be equipped with WPS push-button setup. Here, you would have to make sure that they don’t reconfigure the wireless access-point parameters when you invoke the WPS push-button setup function. There is usually a “Keep settings” option associated with the WPS setup menu/

This option will then allow you to use the push-button setup on the nearest access point to enroll your wireless client device to your home network.

If you are operating a dual-band wireless network which works on 2.4GHz and 5GHz, you may have to create separate extended-service-sets for each band. These would have a different SSID for each band like “Network-Name” for the 2.4G band and “Network-Name-5G: for the 5G band. The security parameters are the same for each band; and you may want to run the 2.4GHz band as “mixed mode” and the 5G band as “N-only”. The advantage of this setup is so you can identify any weak spots that affect a particular band in your dual-band wireless network and is more applicable with the 5GHz band that uses a shorter wavelength than the 2.4GHz band.

Here, you could have the main router that serves most of the house being a dual-band dual-radio type, also known as a simultaneous dual-band unit. This can also apply to an access point expected to cover a large area. Then you could use single-band or dual-band single-radio equipment for providing any infill coverage on either of the bands.

There is no need to reconfigure any of the wireless client devices such as laptop computers once you have set up the network according to the above instructions.

Some devices may not support this automatic roaming behaviour properly and may require you to reselect the network when you move in to the scope of the better access point.

Once you have followed the steps in this article, you will be able to extend the effective coverage of your wireless home network or make your wireless network cover everywhere in your house even if it uses metal-based energy-efficiency measures or has thick brick or stone walls.

How is software being installed on most computers

Being ready for IPv6