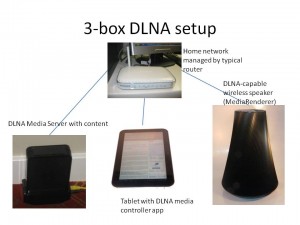 This is an advanced way of setting up a DLNA Home Media Network and requires a network media player to be able to be controlled by other devices on the same network.

It is a function integral to DLNA 1.5 compatible devices and is part of TwonkyMedia Manager (which I have reviewed here) since it started. Now it will be an integral part of Windows 7 where you can select “Play To” to have music playing on another device that you have specified. There will be many handheld terminals that have this functionality, either as part of the operating system or as add-on software and is considered an essential function for mobile devices and the new crop of Wi-Fi-based wireless network speakers, some of which have been reviewed on HomeNetworking01.info.

The three boxes in this DLNA media network

Three are three logical units in this equation

This holds media files or references to media streams and is typically represented by Windows Media Player 11 or TwonkyMedia Server which is part of TwonkyMedia Manager which I have reviewed in this blog.

Also, in a PC-less solution, it can be a network-attached storage or music server device, which is become a very important trend as we move towards a highly-portable home network with a book-sized NAS holding our music, photos and video.

Examples of these include Twonky Manager, Windows Media Player with its “Play To” function, and Linn Kinsky for Windows; Twonky Mobile, PlugPlayer and Gizmoot for the iPhone or iPad; and Twonky Mobile and BubbleUPnP for Android devices. For that matter, this feature is also being considered as a desired for any highly-capable music player or similar application for the Android platform. 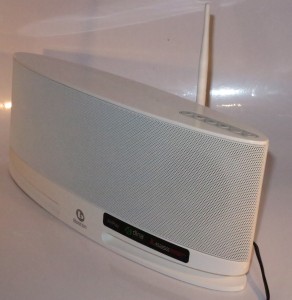 The Media Renderer is similar to a UPnP-capable Media Player except that it can accept instructions via the home network to play particular media files or streams. Typically this setup is represented by three boxes but a device can have two or three of the functions built in to its housing.

An example of this is the TwonkyMedia Manager program or the PlugPlayer DLNA controller for the iPhone or any of the recent Nokia N-Series mobile phones. Here, the program has a built-in software media renderer function as well as a software media server function and control point.

Or you have most recent DLNA-capable AV equipment like the Denon CEOL Piccolo that allow you to choose the content to play using their control panel or remote control; or let you “push” content to them using a DLNA Media Control Point.

What can you do

Put the netbook, tablet or another computer to good use as a media controller

An idea that would appeal to many geeks and media enthusiasts is to load a program like TwonkyMedia Manager 1.2 or Linn Kinsky on to a netbook or subnotebook computer and use this computer as a remote media controller for the DLNA Home Media Network.

This could mean that you could bring up pictures and video on a DLNA-capable TV or electronic picture frame using this terminal. This would end up being much easier than finding the remote control for the TV and working through an unwieldy user interface.

As well, handheld devices like smartphones, mobile Internet devices or PDAs that are equipped with WiFi functionality can work as a remote control, whether natively (in the case of phones like most of the Nokia N-Series phones) or through one of many software programs available through their standard app stores Web channels.

Typically, an AV network media adaptor like the D-Link DSM-320 or the Zyxel DMA-1100P typically doesn’t have any form of display on it. Instead it requires the user to control it using the remote control while using the attached TV as its display. This wouldn’t equate very well if you intend to play music rather than show pictures or videos using the device. Here, these devices can be managed by having the music playlists pushed to them without need for the attached television to be on.

“Follow Me”, “Party Mode” and other advanced playback techniques

Some of the DLNA media controllers allow for advanced playback techniques where program material can be “pushed” to other Media Renderer devices from a particular point in the track. This can allow for “follow-me” playback where the content which was already playing on one device is played on another user-specified device with the content stopping at the previous device; or “party mode” where content is broadcast to a group of devices. The last mode may have problems due to the data-oriented network protocols not being able to work well in supporting synchronous playback from one source. Similarly, there could be other playback techniques like exhibiting different pictures from the same cluster on different screens.

Portable devices being part of the DLNA digital media network 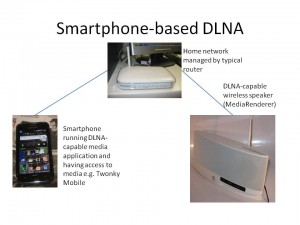 Another application for this kind of operation is for a digital camera or mobile phone to “push” digital images held on that device to DLNA-compliant TV screens or picture frames. This would typically work well for “there-and-then” showing of pictures and videos taken with the device rather than downloading of pictures to a network-attached storage device.

Similarly a mobile phone or MP3 player could “push” digital music held therein to better speakers via a digital media adaptor. To the same extent, these devices are also being used as a key interaction terminal for the Social Web with the likes of Facebook being replete with albums of photos created by everyone on these networks. What would be a good idea to show that album that your Facebook Friend filled from their holiday on your large TV screen and page through each of those pictures using your smartphone as the control surface.

The main issues and hurdles

Not all DLNA-capable playback equipment is capable of supporting “3-box” push-mode operation at the moment. Typically, most DLNA equipment from the big names that was issued over the last two years, especially televisions and network media adaptors and home theatre receivers will support this functionality “out of the box” or through a firmware update that the customer does. Some existing equipment may support the functionality through a customer-performed firmware update or may do so out of the box.

One of the best references for this capability is this list in the TwonkyForum discussion board run by TwonkyMedia, in relation to TwonkyMedia Manager.

Another thing to look for with playback devices is whether the function is enabled even though the device has the function. This may be looked at in the form of a Settings menu option in the Network Settings Menu or similar menu which may be labeled “Digital Media Renderer Mode”, “DLNA Remote Control”, “Network Media Control” or something similar. Some devices may put up a prompt that asks if you want this function to happen the first time content is pushed to that device using the DLNA method. This includes a few wireless speakers that support AirPlay and DLNA having them as selectable operating modes.

If this mode is set to on, the device can respond to DLNA requests. Some devices have the function disabled in the default factory setup while others may allow this kind of control by default.

Once you have this issue worked out, you can then use a handheld device, computer or dedicated remote controller to cause media to play on other home network devices.

PlugPlayer – now available for the iPad

Feature Article–Setting up a new router