I am reviewing the Sony SRS-BTV5 which is the second of the Bluetooth speakers that Sony have released lately. This unit is the same size and shape as an egg and even comes in an egg-crate package with three coloured eggs to demonstrate its small size.

The Sony SRS-BTV5 isn’t like a lot of Bluetooth speakers due to its small size, thus it operates on an internal rechargeable battery. Here, you charge this using a charging setup that uses a microUSB connection, which is becoming the way to go. 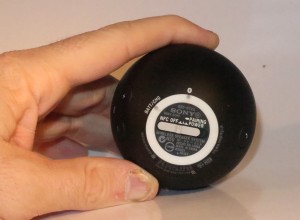 A very confusing switch that is used for instigating standard device pairing.

There is a switch on the underside of the Sony SRS-BTV5 which selects between NFC-disabled, NFC-enabled and pairing but it is easy to confuse for a power switch.  The NFC-based pairing routine didn’t take long between when I touched my Samsung Android smartphone to it and when it was ready to use.

If I wanted to have the Bluetooth speaker shut down so as to conserve battery runtime, I would need to “disconnect” the Bluetooth host device from the speaker using its Bluetooth device menu. This can be annoying for users who want better control over their speakers.

Like the Sony SRS-BTM8 and most other recent Bluetooth speakers, this speaker can work as a hands-free speakerphone for your mobile phone/ As well, you can connect it to your cassette / radio Walkman, Discman or music-filled iPod using a 3.5mm phone jack on the side of the speaker. This jack, along with the microUSB charging socket, is hidden behind a cover that you pull away easily so as to keep dust out of the device.

There is not enough sound-output volume put out by the Sony SRS-BTV5 for use other than close-listening applications. It is on a par to most of the larger smartphones like the Samsung Galaxy Note II that I own. As well, the sound quality is very similar to a small transistor radio with not enough bass.

Personally, I would like Sony to equip the SRS-BTV5 Bluetooth speaker with a power switch so you can have proper control over the battery runtime. Other than that, there isn’t nothing much to fault it for a speaker of its size and application class.

As well, Windows and Android could have native support for NFC-assisted Bluetooth and Wi-Fi Direct setup so there isn’t a need to download applications to set up these devices using Near Field Communication pairing.

The Sony SRS-BTV5 Bluetooth speaker appeals more to those who value the novelty factor due to its egg size and shape. But it can go well as a small personal speaker for “close-listening” needs especially if you use an MP3 player, Walkman, Discman or small smartphone.

It can appeal more as a “stocking-stuffer” gift for most occasions where the recipient may value a small speaker for close-up personal listening.