I am reviewing the Sony SRS-BTM8 Bluetooth speaker which is one of the newer Bluetooth speakers optimised for that music-filled smartphone, tablet or Ultrabook. Here, it allows you to use your NFC-equipped Android smartphone or tablet to facilitate “touch-and-go” setup for that device as well as an easy-to-access pair-up button for other Bluetooth devices. 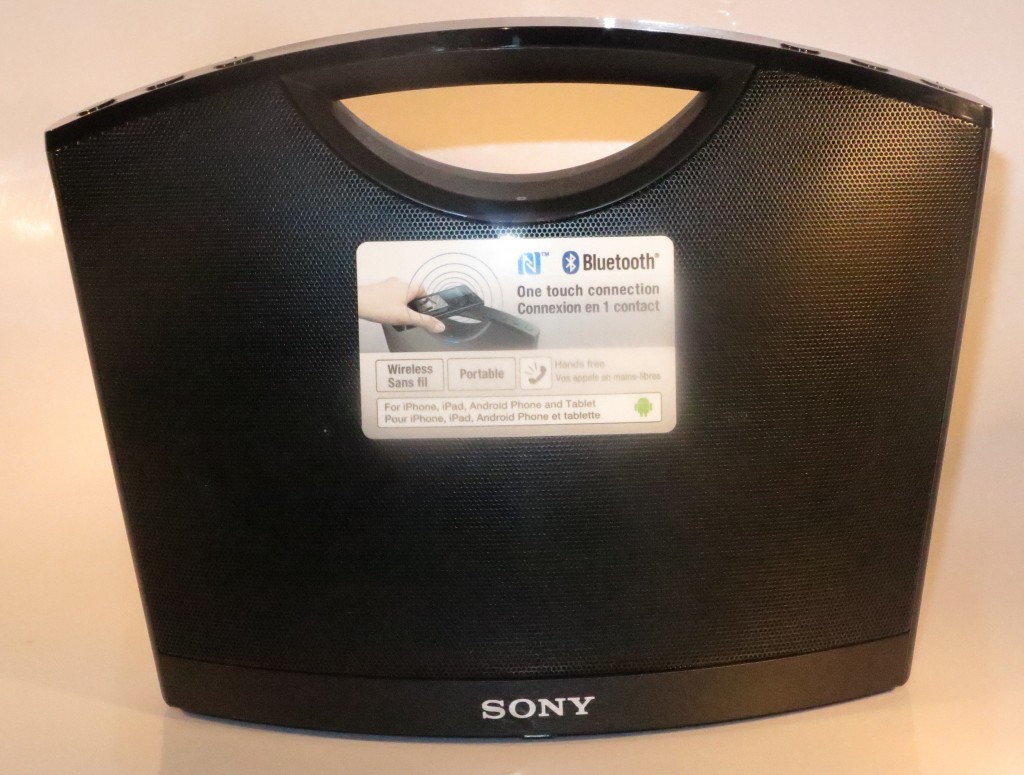 The Sony SRS-BTM8 Bluetooth speaker system can work on 4 AA batteries which are installed underneath the unit, or the supplied AC adaptor. Here, it supports orthodox power arrangement for portable audio equipment where the AC power is more about avoiding the need to compromise battery runtime or allow the unit to run with batteries. The fact that this unit can run on regular batteries can mean that you can safely use it in the bathroom or by the pool. 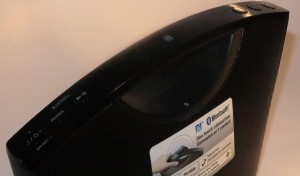 Controls located across the top of the Bluetooth speaker. Also where you touch your NFC-capable Android phone when you set it up with the speaker.

The near-field-communication setup routine works as expected with the Sony NFC setup ap. But you have to hold the phone or other device to the speaker until the connection procedure is finished, which is indicated by a blue light that glows steadily.

Here, it paired up quickly with my Samsung Galaxy Note II phone. I also tried to pair it up with an iPhone using the standard pairing routine and this was very simple, thanks to the “pairing” button.

As well, I wanted to find out whether this speaker can be reinstated to an existing device without you needing to pair up the device again, a problem I have noticed with some Bluetooth speakers, car stereos and other devices that I have had to help people out with. Here, it didn’t take long for the Sony speaker to reinstate itself with my phone once I used the “connect” function on my phone’s Android user interface.

Like with most Bluetooth speaker systems, you can press this Sony unit in to service as a handsfree speakerphone for your smartphone or Skype-equipped computer. Here, this can come in handy for group calls or if you just want the ability to answer that call while you are undertaking another activity.

There is also a 3.5mm line-input jack that you can use to connect that Discman, DAB portable radio, cassette Walkman or music-full iPod Classic to keep those tunes flowing.

Of course, all the controls are located across the top for volume adjustment and control of Bluetooth devices, including call management when serving as a speakerphone. This makes it easier to locate all the controls when using the speaker such as in a bathroom.

The Sony SRS-BTM8 speaker sound like a small radio yet is able to provide some bass in to the sound mix. It also provides a sound that is more room-filling than the speakers that are typically integrated in a smartphone, tablet or small laptop.

A teenager who lives with us tried the speaker with his music-filled iPhone and found that it worked well for bedroom or bathroom use and was impressed with the sound for the product’s class.

Sony could have this as the base product for a variant that has a built-in broadcast radio tuner i.e. as a Bluetooth-equipped portable radio.

As well, Windows and Android could have native support for NFC-assisted Bluetooth and Wi-Fi Direct setup so there isn’t a need to download applications to set up these devices using Near Field Communication pairing.

I would recommend this as an alternative to a small boombox when you want to use it to amplify the sound from a smartphone, tablet or Ultrabook. As I mentioned before, it would come in handy with use by the pool, in the bathroom or in the kitchen due to the fact that it runs on batteries.